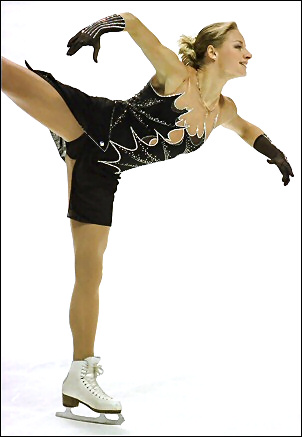 Russian figure skater Viktoria Volchkova has been overshadowed by the exploits of her older and more famous compatriots, Maria Butyrskaya and Irina Slutskaya.

For the past five years, Russia’s Viktoria Volchkova has been overshadowed by the exploits of her older and more famous compatriots, Maria Butyrskaya and Irina Slutskaya, who have won eight Russian championships and eight European championships between them since 1995. Volchkova hasn’t done badly against her teammates, earning a silver and three bronzes at Russian Nationals and a record four straight Europeans bronze medals between 1999 and 2002. “It’s not so great to win a bronze medal for the fourth time. But it’s also a medal and I earned it,” she said after overcoming a toothache to place third in Lausanne in 2002. Volchkova has not fared as well at the World Championships, finishing sixth in 2000 and 2001, seventh in 2002 and fifth in 2003. She was ninth at the 2002 Olympics in Salt Lake City.

However, she continues to medal on the Grand Prix circuit, winning her first gold at the Cup of Russia in 2002, silver at the 1999 and 2000 Trophee Lalique and 2001 Cup of Russia and bronze at the 2001 Skate America. The 21-year-old is also a two-time bronze medalist at Junior Worlds. Other gold medals include the 1999 Junior Grand Prix Final, the Golden Spin in Zagreb in 1999 and the Ukrainian Souvenir and Grand Prize SNP in both 1997 and 1998. She was third at the 1998 Goodwill Games.

The beautiful blonde loves to compete, but said “I don’t think of winning or beating the other competitors. I want to do all my elements, and it’s up to the judges to decide.” Volchkova added, “The thing I like most about figure skating is the competitions. It’s not hard to be a skater, but the hardest part is to cope with yourself while competing. Sometimes I get very tired from practicing and competing and want to rest for a few days, but then I want to go back because I miss it so much.”

Volchkova began skating when she was six after her parents heard a radio announcement about skating lessons and took her to an ice rink in St. Petersburg. She wanted to do pairs because of the rich tradition of pairs skating at the Yubileny Rink in St. Petersburg, but she was too tall. After a few years, she moved to Moscow to train with Victor Kudriatsev, who coached her for several years. Currently she trains with Oleg Vasiliev in Chicago.

Elena Matveeva and Alexander Zhulin choreograph Volchkova’s programs. She used Bach’s Air and Vivaldi’s Four Seasons for her long program last season and music by Saint-Preux for her short. She prefers to skate to classical music, but listens to modern popular music by singers like Mariah Carey and Russian pop music when she is relaxing.

Among Volchkova’s goals are to qualify for the Grand Prix Final and to win at Russian Nationals, Europeans, and Worlds. Eventually she hopes “to win everything including the Olympic Games and the World Championship,” but said “it will be difficult because there are many good girls and there is only one place. It’s hard to say how long it will take to get there.” If she has good results, Viktoria plans to skate professionally and help coach other skaters.

To improve her chances of winning, Volchkova plans to upgrade her triple/triple combinations. “I’m working on them in practice, but it’s hard to show the element when it’s not quite ready. To reach the top, you have to skate clean in all your competitions. But for the Olympics and Worlds, I’m obliged to do it, otherwise it will be difficult to fight for a medal,” she stated. She realizes that she needs to improve her artistic presentation and her spins, as well as her consistency. Volchkova already has one of the best triple lutzes in ladies skating as well as a triple lutz/triple toe combination. “I planned to do a triple Axel one day,” she noted, “but that’s almost forgotten now. I think you’ll see more new elements like the triple Axel and quads from the ladies.”

As a youngster, Volchkova thought about becoming a doctor, but gave it up for skating. Now she is thinking about possibly becoming a journalist, so she is studying English and computers at school as well as sports-related subjects.

Volchkova has most enjoyed her trips to “competitions where I skated well, especially Europeans in Prague and Trophee Lalique in Paris.” Her favorite holiday was a trip to Turkey, because she likes to sun herself on the beach. Among the places she would like to visit are other warm spots like Egypt, Greece, and Miami. At home, Viktoria amuses herself by playing with her cat, Mathilda, or her dog, Bunny. She used to collect miniature calendars with pictures of animals on the back, but limits her collecting now to stuffed animals she receives as gifts from fans. She keeps them all, with her special favorites ensconced on a shelf above her bed.