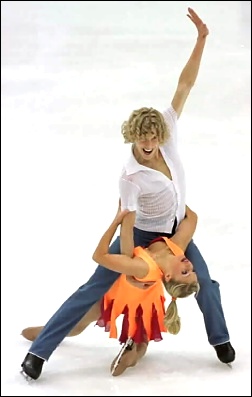 Canadian ice dancers Judith Longpre and Shae Zukiwsky finished fifth at the 2003 Canadian Nationals and hope to have a chance at the podium this season.

Canadian ice dancers Judith Longpre and Shae Zukiwsky finished fifth at the 2003 Canadian Nationals and hope to have a chance at the podium this season. To begin the season, they placed first at the Quebec Summer Championship, then finished eighth at the Nebelhorn Trophy in Germany.

Longpre began skating when she was four. “My godmother put me in it,” she said.” “I was too young to choose. Her dream was to be a figure skater.” “I love dancing,” Longpre said. “I love putting myself in the skin of the character, and to perform my feelings with music that inspires me.”

Zukiwsky started playing hockey and power skating at five and then switched to figure skating at eleven. “I started figure skating to improve my hockey skills,” he said. “Both my sisters were skating as well at the time and I wanted to join them. I competed nationally in singles for many years, up to the senior level, and then I made the switch to dance. I began to take my dancing off the ice much more seriously when I was accepted into the dance program at the University of Calgary, and I decided that I wanted to dance on the ice as well. I find that dance has the potential to be the most expressive of the three genres and I enjoy this freedom to express and create.”

The dancers have been together since 1999. “I had just broke up with my former partner Gillian Davis and I had contemplated quitting,” Zukiwsky recalled. “At the time there was only one partner I was interested in skating with and that was Judith. Unfortunately Judith had a partner. I, and my coach at the time Kim Gingritch, expressed my desire to skate only with Judith to her coach Elise Hamel, who is also Kim’s friend. It was perfect timing because Judith and her partner, Jean-Francois Desaulniers, had just broken up. Two weeks later I moved to Montreal and began training.”

The dancers are coached by Elise Hamel in Boucherville, Quebec. They skate for about four hours a day on ice and 2-3 hours off ice including a variety of dance classes. “I just started the Velouts, a mix of Pilates and Yoga,” Longpre said. “Shae’s sister, Shana Romano, initiated me to that form of training.” Both skaters have taken ballet, but Zukiwsky has more experience. “I began to dance seriously, every day, in University,” he said. “I had been taking ballet since I was 16.”

Bernie Ford choreographs their programs after the dancers pick the music in consultation with Hamel. This season, they are using The Mutato Muzika Orchestra from “The Royal Tannenbaums” soundtrack for their free skate. “The music inspired us,” Longpre said. “I had choreographed a duet with myself and another dancer from Montreal and we had performed it in the winter at the university,” Zukiwsky recalled. “Elise and Judith heard the music at this performance and we all agreed that it should be used on the ice.”

He likes to skate to “music that moves me,” while she loves to skate to the tango. “I love the feeling and the music of that dance. It is easier for me to perform it.” The Tango Romantic is also Zukiwsky’s favorite compulsory dance. She also likes the waltzes. “I love big dresses and great smiles,” she said. Off ice, he listens to mostly classical music from the minimalists like Philipp Glass and Steve Reich to the romantics of Tchaikovsky. Lately, he has been listening to a lot of Chopin and Avro Part. If it’s not classical, he usually listens to Bjork and Radiohead. He also plays the piano. Longpre listens to anything from classical to pop music.

To relax, Zukiwsky likes to read, socialize with friends and cook. “I go out with friends and relax, see and do something different,” Longpre said. “I like comedy movies,” Longpre said. “I am a person who stresses easily, so no suspense for me.” She collects only souvenirs from her skating trips, while he collects plants from tropicals to succulents. “All of them are named and in good health,” he said. He also has a pet fish, while Longpre has two Himalayan cats, Mozart and Nelly. Longpre reads books on psychology, while Zukiwsky said he reads “just about anything. I enjoy Salman Rushdie and Annie Dilliard to name a few. I also spend a lot of time reading philosophy.” As for movies, Zukiwsky said, “I tend to stay away from the Hollywood blockbusters. I frequent an art house theatre that carries many foreign and independent films.” Besides movies, he attends many dance performances and exhibitions. He said he avoids television and is a proud non-TV owner. Instead, he spends his time creating, choreographing and drawing in his life studio.

“I often go home to Alberta to visit my family whenever I have a holiday,” Zukiwsky said. His first choice as a travel destination is India, with Thailand a close second. Longpre likes to go “in the south, where I can rest on the beach far from skating and the cold weather. I would like to travel anywhere in the world. Each country has interesting thing to see and to learn. I wish I could see the most countries as possible.” Vienna was one of her favorite trips.

Longpre has completed high school and is taking time off from her studies, but intends to take university courses next year. She hasn’t decided on a post-skating career but plans to keep involved in the sport through Skate Canada. Zukiwsky has just completed a Bachelor of Fine Arts in Contemporary Dance from Concordia University. He is applying for graduate school. “There are so many things I would like to do after skating,” he stated. “At the moment I think I would like to be a university professor and an author.”

The skaters plan to continue to 2006. “I hope to be a national medalist and a member of the World Team,” Zukiwsky said. “I want to always enjoy skating and remember why I do it.” Longpre hopes to “go to the Olympics and the World Championships. I want to always progress and continue skating until I reach the top of my capacity and my talent, not before.”

“Skating teaches life lessons,” she explained. “Failure, victory, deception, waiting, discipline, etc. It a great challenge. I love the crowd, the fans and performing in front of as many people as possible.” Zukiwsky added that he enjoys “the freedom and the speed. When I dance on the floor I am somewhat bound. There is no velocity, no movement in the stillness. Skating is like flying, complete abandonment. I can escape through the wind in my face.”