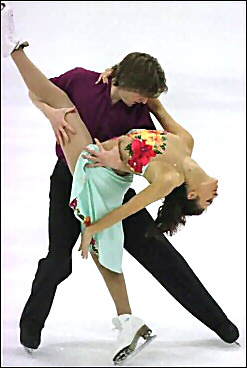 Canadian junior ice dancers Milena Todaro and Anthony Evans are looking forward to this season. Last season, they finished ninth in juniors at Canadians after finishing second in junior ice dance at the 2003 Isar-Pokal in Germany.

This season, they placed second in both the original and the free dance at the Lake Placid Ice Dancing Championships, first in all three dances at the Quebec Summer Provincials, and first in the compulsories and free dance and second in the original dance at Autumn Skate. They are hoping to make the top five in junior dance at Canadians in Edmonton. “We would love to make it to the national team and represent Canada internationally, and of course, like every other competitive skater we dream of competing at Worlds,” Todaro said. “Our goals are basically to perform in competition to the best of our abilities and see where that takes us.”

“We really want to establish ourselves as a serious and committed team,” she continued. “We are in it for the long-term opportunities. We are not a fly-by-night couple. We have both made a huge commitment to the sport, with Anthony relocating to Montreal and having to go through the long and costly citizenship process, both of us having to work very hard at school and sometimes dealing with less-than-ideal training sites and schedules, to maintain our grades while training as much as possible is not easy. But we do it every day with more with joy and passion because in the end, all we want to do is dance.”

Both skaters are serious about music and even do a lot of their own choreography, unusual for junior skaters. “Our OD this season was a collaboration between ourselves and our coach, Aimé Leblanc,” Todaro said. “Our free dance was choreographed by Bruno Yvars and Martine Patenaude, with artistic touches by our Indian dance pro, Jeet.” Evans added, “A lot of our show programs and some of our OD these past two seasons have been our handiwork. Our OD is Jump Jive and Wail by Brian Setzer, Fever by Peggy Lee and The Dirty Boogie By Brian Setzer. Our free dance is a Hindu theme, with eleven cuts of music in it. The pieces are from the movie soundtracks of Monsoon Wedding, Devdas and Kamasutra.”

“Anthony has very specific music likes and dislikes, so he is the most difficult to compromise with,” Todaro added. “Usually during the spring we come up with a theme for the free dance and scour every available record store for interesting CD’s and movie soundtracks. We try to pick something that suits us and that is also original and crowd-pleasing. I like anything that, when you hear it, makes you feel like getting up and dancing!”

“I am a music fanatic,” Evans admitted. “In my spare time, I am usually either listening to music, playing music, or trying to find music. I have a very wide range of musical tastes that probably includes most all genres. Above all, I would say I like music that makes me feel a genuine emotion be it sadness, happiness, madness, passion, romance. There is an appropriate piece of music for every moment in life. I played piano since the age of three, and trumpet since the age of nine, and have some experience with drums and percussion.” “I used to play the piano and now play the drums,” Todaro said. “I love Moby, No Doubt and old stuff like David Bowie and Queen.”

Evans began skating when he was six, while Todaro was four. “My Mom signed me up for Canskate,” she said. “I spent most of the first season holding onto the boards, crying from sheer terror. The following season is when I really started to love the sport. I started skating, ballet, tap dance, ballet jazz and swimming lessons at the same age because my Mom wanted me to choose something that I really liked.” “I was not playing a winter sport at that time, so I decided that I wanted to learn how to skate,” Evans remembered. “I never planned to actually figure skate or play hockey, I just wanted to learn how to skate, so my parents got me involved with the local figure skating club.” There are no other skaters in their immediate families, although Todaro’s cousin is hockey player Andy Stewart.

“I started out in singles, as most young skaters do,” Todaro stated. “I made it to the Quebec Games and competed at the provincial championships. But my jumps were mediocre, so my coach had me try for pairs with a few boys, but they all thought that I was going to be too tall in the future. I was disappointed, but finally, I tried dance and loved it. Today, I am five foot-eight, much too tall for a pairs skater.” “I did both dance and freestyle until about four years ago,” Evans noted. “Growing up and skating in a very small town, there were not many people who tried to compete seriously in figure skating. My dance coaches on the other hand came to my local club from Montreal and they pushed me to come to Montreal and start training seriously for dance.” Todaro began competing in dance when she was 12 with Philippe Lavallée, while Evans’ first serious partner was Carly Dumas when he was 15.

The dancers started skating with each other in 1999. “I lost my first partner and was looking for a new one,” Todaro said, “when I heard from word of mouth that there was a boy from the States who needed a partner. My Mom got in touch with his coach, and she informed me that he already had someone in mind for him, but asked if I was interested in trying with someone else. I did, and was much too tall, but the coach saw me and thought that I would be great with Anthony, the American. We had a try out in Massena, New York, and the deal was done.” Evans then moved to Canada to train with Todaro.

The dancers now train at Boucherville Center Elite in Montreal, Quebec with Aimé Leblanc. Todaro has been with him for six years, since she started dance, and Evans for four, since they started skating together. “We train between three and four hours a day on-ice,” Todaro said. “It varies whether it’s summer or winter, and we work out three times a week at the gym, weightlifting and doing cardio. We also took Pilates and ballroom dance this summer.” They also run, while Todaro enjoys rollerblading and Evans plays sports like basketball and ultimate Frisbee with friends. He also played both soccer and baseball for many years before having to give them up to be able to skate year round. As for other athletic activities, Todaro also enjoys horseback riding and water skiing. “I have taken every dance class imaginable,” she added.

Among the compulsory dances, Todaro enjoys the Viennese Waltz and the Blues. Evans said, “All of the compulsories have their good points, but if I had to choose one, I would say that the Westminster Waltz is a beautiful dance with its grandiose ballroom style. It is a hard dance for the edges and control, but it allows plenty of room for individual interpretation and style.” She listed the Quickstep as one of the hardest dances, while he said, “I have yet to work in depth on the diamond dances, but I would say that the Argentine Tango is a very hard dance to skate well, start to finish.”

Both skaters would like to skate professionally and stay involved with the sport afterwards. “I would love to start doing some choreography,” Todaro said, “but I have to wait until I pass my level 1 which is required in Canada.” “I am volunteer-coaching and participating in the administration of the McGill University Figure Skating Team,” Evans said. “I love teaching skating to others, and could possibly see myself doing it someday as a profession. There is a lot to learn before that, so I am remaining focused on my amateur career at the moment.”

Both skaters are also focusing on schoolwork. “I attend Edouard-Montpetit CEGEP and I am completing the necessary courses to get into university,” Todaro said. “I am really enjoying my history and psychology classes right now.” Todaro plans a career in the area of advertising and marketing, while Evans is currently studying mechanical engineering at McGill University. “It is a field which fascinates me, but I have no idea where I will be five or ten years down the road,” he said. “I would love to stay involved with figure skating, but also have very large interests in the fields of technology, and music. I know, it’s kind of all over the place, but I guess time will only tell where the opportunities lie.”

Among Todaro’s hobbies are collecting anything Hello Kitty, reading and designing skating dresses for herself and for other skaters. “I love to read,” she said. My favorite books are by authors like Louise Rennison, Sharon Creech and Rebecca Wells.” “As a kid, I did not enjoy reading,” Evans remembered, “but since starting university, reading is something that I enjoy quite a lot, and try to spend quite a bit of time doing.”

The dancers are big computer users. “I am always surfing the net,” she added. “I love emailing people I have met through skating who live across the country. I also use it for school. “I would say I spend minimum of 3-4 hours per day on my computer,” Evans stated. “I use it for pretty much everything.” They also enjoy going to the theatre. Todaro said, “I don’t have any particular movie preferences, but I enjoy watching Nicole Kidman and Catherine Zeta-Jones on-screen. “I can go for pretty much any type of movie,” Evans stated, “as long as it keeps my attention, and it is something that I can feel and/or identify with.”

Both Todaro and Evans love to travel “The best trip so far was when we competed at the Isar-Pokal competition in Munich, Germany,” Todaro said. “It was a perfect mix of getting to know the city, socializing with dancers from other countries and skating. I would love to visit London or New York and really get to know the city, not just from a tourist’s perspective.” “My family was constantly taking road trips so it just became normal for me to be on the go,” Evans said. “As far as a best trip, I have to agree with Milena on our trip to Munich, Germany. It was amazing. I love going to places where I am going to experience something new, and eye opening. Top places on my list would be Europe (Paris, Venice) and the Orient (Japan, Thailand, Vietnam, Korea, Malaysia).