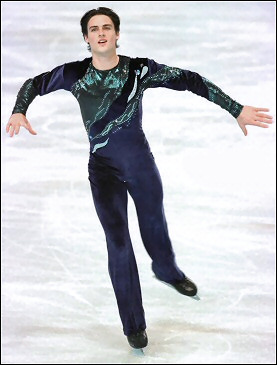 For 2003 Canadian men’s bronze medallist Fedor Andreev, skating is his business and racing is his passion.

For 2003 Canadian men’s bronze medallist Fedor Andreev, skating is his business and racing is his passion. “Cars are my passion,” he enthused. “Racing takes up all my time off ice. I have three cars including a BMW 325, an Acura RXS Type 2 and a dragster. I try to race every weekend in either autocross, SCCA, or drag races. I usually run in the import, STS class, street tire division but if there are no races, I go to the drag strip. I usually get a trophy almost every week and I won the last race of the season. I do a lot of work on the cars and by the end of the season, I’m really running well. I do all the engine and suspension work, everything except the paint and body work. My best time so far is 13.803 in the RSX (102 mph).”

For Andreev, skating is a family business. His mother is coach, Marina Zueva, who moved with him from the Minto Skating Club in Ottawa, Ontario three years ago to work with Igor Shpilband in Michigan. She helps coach ice dancers Tanith Belbin and Benjamin Agosto, among others. His stepfather, Alexei Tchetverukhin, got Andreev into skating when he was eight and by 12 or 13, he had landed a triple salchow and a triple toe loop. He started working on quadruple jumps in 1999 and landed his first quad toe in competition at Skate Detroit. He has been working on a quad toe/triple toe combination but has only landed the combination under rotated.

The talented 21-year-old trains at the Onyx Skating Academy with Richard Callaghan, skating three one-hour sessions each day. He runs through both his long and his short program every day. He also does about an hour and a half of off ice work every day, including ballet, which he started when he began skating. He has also begun practicing pairs with the USA’s Jennifer Kirk.

His mother, working with Callaghan, selects all his music and choreographs his programs. “I like to skate to all kinds of music,” he said, “but my mother chooses what she thinks is best for me.” He is using Dialogue de Vent de la Mer by Claude Debussy for the short program and Allegro Aolto Moderato by Edvard Grieg for the long. Andreev also has a show program to Mack the Knife. “It’s a few years old, but I’ve updated it,” he noted. Although he claims not to be especially talented musically, Andreev does play the violin.

Off ice, Andreev listens to trance and hip-hop music and especially enjoys the Dave Matthews Band. He’s also a big fan of anime films. Other than racing, he likes to stay home and spend time with his girlfriend, Tanith Belbin. He said he uses his computer a lot, “buying and selling car stuff on eBay. It’s a good place to buy and sell parts.” Of the places that he’s traveled, Andreev most enjoyed New York City and Paris. “I liked seeing the architecture and stuff,” he said.

For this season, Andreev said, “I just want to improve my skating and be more consistent. Eventually I’d like to go to Worlds and the Olympics, but I’ll take whatever comes.” So far, he has finished seventh at Trophée Lalique and 11th at Skate Canada. The 1999 Canadian junior men’s champion finished ninth at the 2003 Four Continents Championships and took the bronze at the 2000 ISU Junior Grand Prix Final. He also won the bronze at the Nebelhorn Trophy last season.

Andreev has finished high school and taken some additional courses, but has not enrolled in college. “I plan to go, but I’m not sure when,” he said. As for a future career, he is still undecided. “I do some coaching now,” he said, “mostly helping my mom with singles skaters, but I don’t do any choreography. I like coaching, but don’t know if that’s what I want to do.” Andreev is also popular as a model, which helps pay for his skating and racing.