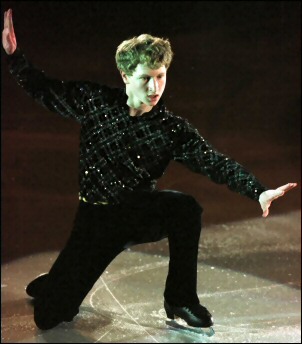 For 2003 U.S. novice men’s champion Colin Pennington, the title is the first step in catching up to his older brother, Parker.

For 2003 U. S. novice men’s champion, Colin Pennington, the title is the first step in catching up to his older brother, Parker, who now competes in seniors after winning both the novice and junior men’s titles. This season, Colin is competing in juniors. So far, he has won the North American Challenge in Lake Placid and placed seventh at the ISU Junior Grand Prix in Mexico.

He won the North Atlantic Regionals, but finished fifth at Easterns, just missing a trip to Nationals this season. Pennington said, “My goals in competitive skating are to be a National, World and Olympic champion. I plan to compete for as long as I possibly can, then skate professionally.”

Pennington trains with Carol Heiss-Jenkins in Lakewood, Ohio for three hours a day on ice. His brother also trains with Jenkins, allowing the brothers to maintain a friendly rivalry on ice. The brothers and their mother moved to Ohio from Connecticut in 1994 to train with Heiss-Jenkins. Pennington spends about three hours a week in off ice training, which includes ballet, hip-hop dancing, and conditioning.

For this season, Pennington is using Umbrellas of Cherbourg for the short and Prokofiev’s Romeo and Juliet for the long. Olga Volzchinskaya choreographed both his short and long programs, but he noted, “I add my own touches here and there.” As for finding music for his programs, he said, “I am constantly listening to all types of music year round. I like to skate to many different types of music, but particularly classical music.” Off ice, he listens to alternative rock. His favorite groups are The Used, Finch, Chevelle, and Simple Plan.

Off ice, the 16-year-old said, “I like to go to the movies, listen to all types of music, chat on the internet, cook, and dance. I play golf, basketball, pool, and ping-pong.” He enjoys all types of movies, especially action films, and likes to read adventure and science fiction books. He also has his won website at www.colinpennington.com. Pennington also enjoys travel. His favorite trip was to Mexico City, Mexico. “I would like to travel to Australia, Italy, Ireland, Spain, Brazil, and Norway,” he said.

Pennington is a junior in high school, where his favorite subjects are chemistry and geography. He plans to continue his education after he finishes skating, but hasn’t selected an occupational field.