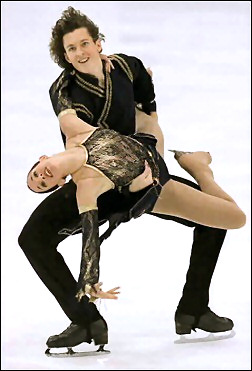 Canada’s junior dancers Magali Charpentier and Jonathan Pelletier represent the new generation of ice dancers who hope to eventually fill the void left by the departure of Shae-Lynn Bourne and Victor Kraatz, who have dominated the Canadian ice dance scene for over a decade. Now that Canada has won a gold medal at the World Champions, young skaters like Charpentier and Pelletier have renewed their efforts to represent Canada at the Worlds and Olympics. “We want to be unique, to be known and to leave a mark as a very special team,” Charpentier noted. “We hope to skate as long as our bodies will allow us,” Pelletier added.

Charpentier said she began skating when she was five “because my sister was skating and I wanted to try.” She won a couple of medals in invitational competitions in singles, but switched to dance because she always enjoyed dancing, much more than free skating. Pelletier, who is not related to David Pelletier, started a bit later when he was seven, but didn’t compete in freestyle. “I like to skate with a partner and I also love the theatrical side of ice dancing,” he said. They joined forces in March 2002. “We used to train on the same ice and with the same coaches but different partners,” Charpentier said. “We both needed a change in our skating careers so we did a try out and the match was great.” Within their first year, the promising juniors had won the Quebec Sectionals and finished seventh in their first international, the ISU Junior Grand Prix in Montreal. This season, they again won the Quebec Sectionals and finished 13th at Czech Skate, their only Junior Grand Prix event.

Julien Lalonde and Jean-Pierre Boyer coach the couple at Candiac CPA. They spend about 3.5 hours on ice every day and another two hours in off ice training. That includes the usual ballroom, ballet, conditioning and plyometrics classes. Both Lalonde and Boyer choreograph the dancers’ programs. “All our team gets involved in the procedure, but we have the final word,” Charpentier said. This season, they are using Rock Around The Clock, Blue Moon and Tutti Frutti for their original dance and I Would Do Anything for Love by Meat Loaf for the free dance. “It has a story that involves feelings, it sounds great, it is a piece that people know and it has never been skated to,” Charpentier explained.

Charpentier most enjoys “skating through my slow parts but anything with rhythm is fine,” while Pelletier likes “anything intense.” Latin dances are his favorites, while she prefers waltzes. Off ice, Pelletier said he listens “to everything I hear from classical to hard rock,” while she enjoys pop, Latin and instrumental when I’m studying.”

Pelletier attends Collège Ahuntsic, while Charpentier attends Collège Édouard-Montpetit in Pure and Applied Sciences, with one year to go before university. She plans to be a physiotherapist or sports therapist, while Pelletier wants to work in the field of architecture.

For relaxation, Charpentier likes to read, watch movies, surf on the net, chat with my friends, go biking, go on scenery tours, etc. She also likes running and mountain biking and has a fox terrier named Daisy. She collects skating pins and stuffed animals. Pelletier also enjoys outdoor activities, cycling, roller-blading, and badminton. He likes to read fantastic stories, while she prefers the Harry Potter books, dramas and Québec literature. She likes all kinds of movies except thrillers, while he’ll watch anything, “as long as its good.”

Charpentier most enjoyed Walt Disney World Resort in Florida for vacation. “I really enjoyed competing in all the provinces in the Maritimes because people from there are fantastically nice,” she added. He most enjoys the Bas-Saint-Laurent region. Charpentier hopes to travel to Egypt, France, Spain, Italy, Greece, while Pelletier wants to visit Alaska.

“I like performing and improving,” Charpentier said. “We want to show the public what we are capable of doing,” Pelletier added.