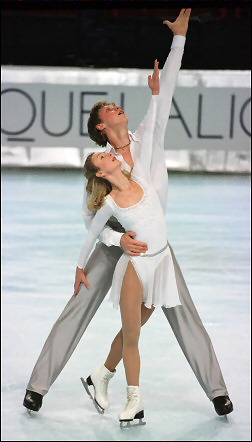 Viktoria Borzenkova and Andrei Chuvilaev were fourth at the 2003 Russian Nationals.

After her fourth pairs team won Olympic gold, famed Russian coach Tamara Moskvina could have retired to St. Petersburg and a place in Olympic history. But earlier this year, some unique new Russian pairs skaters, Viktoria Borzenkova and Andrei Chuvilaev, came to her and pleaded with her to continue her coaching and help them reach the highest level of the sport. “We want to skate at the 2006 Olympics and continue until our health diminishes,” Chuvilaev said. Intrigued by the couple’s unique talents, Moskvina agreed to take them on. Borzenkova, at 167 cm, is tall for a pairs skater, but extremely flexible, allowing her to contort herself into interesting new positions that Moskvina devises. Chuvilaev is even taller at 200 cm, making him probably the tallest skater competing today.

The couple had good results before they began training with Moskvina in April. They won the World University Games in both 2001 and 2003, finished seventh at the European Championships in 2002 and 15th at the World Championships that same year. They were fourth at the 2003 Russian Nationals. This season, they finished seventh at Trophée Lalique and sixth at the Cup of Russia, their first experience with the Code of Points. “It has positive and negative parts,” Borzenkova said, “but it’s mostly good.”

“They have a very nice look and are very hard workers,” Moskvina said. “I have to teach them a lot of things and had to change a lot of their prior teaching. I have changed nearly everything from the roots and you can see them now as different skaters then they were last season. You can now look at them as a high level pair. They just need to do all the elements in the competition. For this season, we just want to see where their work will put them and continue to improve step by step. They were fourth last year and we will try for second this year in Russia. First is not possible.” The couple trains for two to three hours on ice every day in St. Petersburg with another hour of daily off ice work. Of all the elements, Chuvilaev likes the death spiral most, while Borzenkova enjoys the throws the most. “I like the feeling of flight,” she said.

Borzenkova, who was born on Christmas Day, began skating when she was five. “My mother was a gymnast and she wanted me to be a gymnast, but I insisted on skating,” she said. The lovely blonde began pairs skating when she was 16. Chuvilaev began skating when he was three, but not seriously until he was five. “I had an older sister who was a competitive skater and the ice rink was close to our house,” he said. “She had to quit skating because a doctor told her not to skate but I continued. I skated in singles and got to the high tests, but then switched to pairs at eleven. I tried dance for three months, but I didn’t like it because there were no jumps or lifts, just steps.”

Chuvilaev is Borzenkova’s first pairs partner. “Andrei is very kind and caring as a partner and very reliable,” she stated. He previously skated with other girls with limited success before he was matched with Borzenkova three years ago. “I didn’t have much success before,” he said. “Viktoria is bold and directed and can concentrate on everything,” he said. “She is very hard working and tries to achieve everything.”

Moskvina also choreographs their programs with assistance from Evgeny Sereznikov. They are using Time to Say Goodbye for the short and Fantasy on a theme by Ryabinin for piano and orchestra, Op.48 by Anton Arensky for the long. Moskvina received the CD with Time to Say Goodbye as a gift from performer Drew Tretick from Los Angeles. She originally wanted to use it for Berezhnaya and Sikharulidze, but decided to use it for Borzenkova and Chuvilaev instead. “The long program music was suggested by the choreographer who did the first draft of the program,” Moskvina said, “then I redid the whole thing to show their strong points. The short program was my idea. I did the entire short program.”

Both programs are new this season. “I like to skate to different programs every year,” Chuvilaev said. “I like to skate to Oriental music,” Borzenkova said, “but it has been used by many different skaters.” She likes the new short program music. “We think of it as “Time to Say Hello,” she said. Off ice, Chuvilaev listens to mostly Russian music, but not pop. “I listen to different kinds of music depending on the moods I feel,” Borzenkova said.

Off ice, both skaters like snow skiing. Borzenkova also loves horseback riding, a sport she has enjoyed for the last five years. For the last three years, Chuvilaev has also accompanied her on her rides. Among her other interests, she also likes to read classical foreign novels and books on psychology and he likes to cook. “He’s a very good cook,” Borzenkova said. From the different countries that they have visited, she collects refrigerator magnets and he collects souvenir plates. “I haven’t traveled a lot yet,” she said, ” but I liked France and Japan.” “I liked Iceland,” he said. “It was very beautiful with all the natural things.” He would like to visit Ireland and Scotland, while she would like to visit the United States. For holidays, Chuvilaev returns to Moscow to visit his parents.

Both skaters have graduated from the Academy of Physical Culture, but don’t have firm plans for future careers. “We are thinking now only of what we can achieve in skating,” Chuvilaev said.