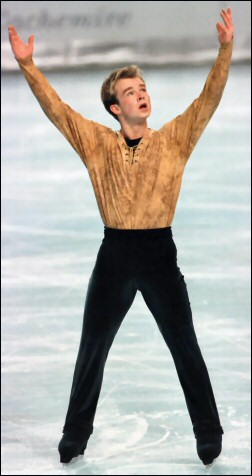 Stefan Lindemann was the first German man to win the World Junior Figure Skating Championships in 2000.

For the last several years, three German men have battled for the top of the podium at German Nationals – Stefan Lindemann, Silvio Smalun, and Andrejs Vlascenko.

But this year, the stakes are higher. The World Championships are in Germany for the first time since 1991 and the winner will represent Germany there. “My goal for this season is to go to the Worlds in Dortmund,” Lindemann said, “but it will be very hard.” On Jan 4, he met that goal by winning the 2004 German Figure Skating Championships.

Lindemann has won the German Nationals twice, but wasn’t successful last season. “I was injured on the day I was going to Paris for Trophée Lalique when I hurt my groin on a bad landing on a loop. I was off for four weeks, then had weeks of physio and cycling before training again. I was back for German Nationals but I was not the same.”

The 23-year old has had some success on the international circuit, finishing as high as eighth at Europeans in 2000 and 13th at Worlds in 1999. He was the first German man to win the World Junior Figure Skating Championships in 2000. This season, he finished ninth at Skate America and 11th at Trophée Lalique.

Lindemann began skating when he was four. “My father wanted me to be a soccer player like he was, but my mother thought I should try skating so she took me to the rink. I do play soccer sometimes, but just with my friends to relax.” He landed his first triple jump, a triple toe loop, when he was thirteen and his first quad, also a toe loop, when he was 16 or 17. “I like jumps the most,” he said. “It’s a great feeling to be in the air, turning around four times. It’s like flying.” He has also been practicing the quad salchow and the quad lutz, but hasn’t landed any of the jumps cleanly. Lindemann has already gone into the record books as the first German to land a quadruple jump in competition at the Bofrost Cup on Ice, where he won both the jumping competition and the long program to take the overall gold medal.

“I enjoyed the jump competition at the Bofrost Cup very much,” he said. “I was very relaxed there. There was more audience participation and more fun. For me, it wasn’t as difficult as doing a short program. I like the new judging system too. It’s good that you can move up many places by yourself and not because of other skaters’ mistakes, but I don’t like it when you two-foot a harder jump and get less credit than a clean lesser jump. From the judges marks at Skate America, I saw that my marks for spins were not so good, so I’ve been working more on spins in practice, but spins are hardest for me.” Lindemann noted that in the non-CoP competitions he will be attempting a quad toe/triple toe in both his short and his long programs. “I want to get the feeling for doing it in every program,” he added.

Lindemann tries to change either the short or the long program each year, but not both. Iwo Svec choreographs his programs. This year, he is using music from the Earnest soundtrack for the short program and Le Petit Poucet for the long. “The short program is a Dixie-jazz piece that my choreographer found for me,” he said. “Several years ago I used music like that and I thought about going back to it. Last year I only used the free program at Nationals and Europeans so I wanted to use it again. We had two choices for the music, this or “Spy Game,” but this is more difficult than the other. I didn’t want to skate an easy program even though I’m not so good at presentation.” Off ice, he said he enjoys “black, soul and rhythm and blues music.”

Lindemann trains with coach Ilona Schindler in Erfurt, except in the summer when the rink has no ice. Then he goes to Oberstdorf or Austria for summer camps for two or three weeks at a time. In season, he normally works for three hours on ice every day, plus another 2-3 hours off ice. He does ballet and conditioning work and lifts weights in the gym. In the summer, he goes cycling with the speed skaters in his local club, but said he doesn’t like jogging because “it’s boring running by yourself.” He also spends four or five weeks training in the German Army. “I am just a regular soldier,” he said. “I’ve been in the Army three years and have reached the third rank.” But he doesn’t intend to make it a career “I have started to study at home in sports and tourist management. A lot of people want to do sports and there are a lot of jobs in Germany so I’d like to go in that direction. I pan to compete for sure until 2006. After that I’ll decide on my career.”

For fun, he likes to play tennis, visit clubs, and watch movies, especially comedies and movies with George Clooney and Robert DeNiro, his favorite actors. He saves all the badges from his skating events and keeps the toys he receives in his apartment. “I use my computer a lot at home,” he added. “I use it for email and to see what’s new in the world and in skating.” On holiday, he likes to go to either to the beach or to the mountains for skiing. “Last year was the first time I went skiing for five years,” he noted. Lindemann, who speaks German and English, plus a little French and Russian, enjoys travel. “I want to visit Australia to visit my cousin in Sydney some day,” he said.