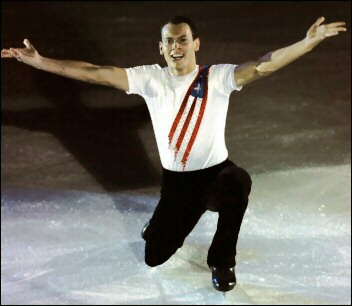 One of the up and coming US figure skaters in the men's division is Nicholas LaRoche, who won the junior men's title in 2002.

One of the up and coming skaters in the men’s division is Nicholas LaRoche, who won the junior men’s title in 2002. Since then, LaRoche has moved up to seniors, finishing eighth at the 2003 U. S. Nationals. This season, LaRoche placed third at the Nebelhorn Trophy in Germany and eighth at the Golden Spin of Zagreb in Croatia. LaRoche has the confidence needed to excel at the highest levels, stating forthrightly, “I’m just starting, and if you haven’t heard of me yet, you will!”

LaRoche is focused on achieving the highest levels in skating. “I think every athlete’s goal is to make the World and Olympic scenes and for me to have those dreams as well, I need to just take each training day, and each event one at a time learning from both the successes and failures,” he said. “I concentrate on the present with my future in sight, but giving 100 percent to each season and being a consistent skater is what will help me achieve those goals that are not too far off.”

He began skating when he was nine. “Watching Kristi Yamaguchi win the 1992 Olympic Gold inspired me to try skating,” he said. Four years later, he landed his first triple jump, a salchow, but the triple lutz is his favorite jump. He is using a triple lutz/triple toe loop combination in both his long and short programs this season, but noted that “the triple Axel/triple toe is still very new for me and I have yet to try it in competition. Maybe by the time Nationals comes around I will be ready to add it into my long. I am working on three quads, but I am going to keep which ones a secret. And yes, I have landed a few.”

The talented 20-year-old trains for two to three hours a day on ice and an hour off ice, primarily cardio and gym work. Although he has taken ballet for six years, he is not currently working with a ballet trainer. He currently trains in Harbor City, CA with Nedda Soltani, with whom he has been been working for two years now. Grant Rorvick does his choreography. “Grant and I work very well together,” LaRoche said. “We have learned to be honest with each other and if we don’t agree on something then we need to change it. We are really good about finding stuff that we both agree on, whether it be something he came up with or I.”

This season, LaRoche is using a piece of music from The Secret Garden for the short and music from Dragon Heart and Jurassic Park for the long “Most of the time I will hear a piece of music and just know that’s the one,” he said. “When you are able to feel like the music inspires you or that you feel a fire from it that helps your performance and the way of being able to project a character, or portray a story. I have skated to all different types of music and I would say the ones I express the best are slow pieces of music that just keep building throughout the song. I am very musical with those types of songs. Off ice I have lots of favorite music. It would be way too hard to narrow it down to a favorite artist or song but a few of my favorites include: Celine Dion, Nsync, Cher, Stevie Wonder, and Barenaked Ladies.”

LaRoche has graduated from high school but hasn’t made any college plans. “At this point in time I am not sure what I would like to do with school,” he said. “Skating only goes for so long, and school will always be there. If it’s something I would like to go back and do, I will do it later. I would like to skate professionally, but I am going to enjoy every moment of my amateur career and see what I can make out of it,” he continued. “Then I would like to skate in a show such as Champions On Ice, and possibly do some coaching.”

To relax, LaRoche said, “I love to go to the beach, and spend time with friends. I like to get away from the skating aspect sometimes and just clear my mind. I don’t collect anything, but I can say I love to shop. That would definitely have to be my weakness. As far as movies, I’m open to pretty much all of them. I am more so into the romantic types, or comedy. But I can’t say that horror is my favorite. I like to read stuff that I can relate to. If I can put myself into the situations in the book, I have a hard time putting it down.” He also uses his computer to keep in touch with friends and update his website at www.figureskatersonline.com/nicholasLaRoche.

LaRoche loves to travel. “I would say that Oberstdorf, Germany has been my favorite place so far that I have been to for competition,” he said. “It was so beautiful. For just regular travel and being able to relax I loved Hawaii. I would love to go to Fiji.”