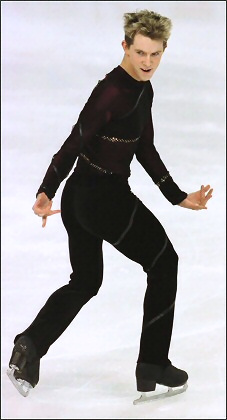 After taking the silver medal in junior men at the 2002 Canadian National Figure Skating Championships, Keegan Murphy was hoping to have as much success in seniors as gold medalist Shawn Sawyer.

After taking the silver medal in junior men at the 2002 Canadian Nationals, British Columbia’s Keegan Murphy was hoping to have as much success in seniors as gold medalist Shawn Sawyer. But he’s been stuck on number 13 since then. Murphy finished 13th in senior men in both 2003 and 2004. This year he was 13th in both the short and the long. But he was more concerned about his little sister, Kelsey, who was competing in senior pairs with Ryan Shollert. “Finally, she’s getting some attention,” he noted. And where did his sister finish? She and Shollert were 13th in the short, the long and overall. Quite a pattern.

Murphy has competed in several Junior Grand Prix events including those in Bulgaria, Italy and Slovenia. He has won three silver medals in international competition, including the 2002 Gardena Spring Trophy, 1999 Triglav Trophy, and 1999 North American Challenge Skate in Burnaby. He also won a silver in novice men at the 1999 Canada Winter Games.

Murphy started skating when he was three. “My mom is a coach so as soon as we could walk, we could go to the rink,” he said. “Hockey never appealed to me but I played soccer and baseball until I was fourteen in community leagues. I played defense in soccer.” Murphy landed his first triple salchow at eleven. He’s been working on a quad salchow and quad toe loop since last summer and has come close to landing some. He is using a triple lutz-triple toe combination in his programs and is landing a triple Axel fairly consistently. “I have two triple Axels in the long and I really look forward to doing it now,” he said.

Murphy trains for about two and a half hours every day with his mother, Eileen Murphy, in Burnaby. Off ice, he does Pilates and ballet in the winter, plyometrics and hip hop classes in the summer, plus weight training and ab work at home. “I’ve had ballet since I was 13,” he said. “I have a good spiral now.”

Mark Pillay choreographed Murphy’s short program to Imagined Oceans while Mitch Millar choreographed the long program using Led Zeppelin’s Stairway to Heaven and Paint It Black. “I picked the music for the long program,” Murphy said, “and Mark found the music for the short. He’s in modern dance and can find music no one knows. I usually change one program every year. The short is new and the long is the same as last year. When I get a new program, my goal is to try something new. I won’t say no to anything. I listen to all kinds of music. For me, all music is good. I want to learn to play the piano.”

In addition to listening to music, Murphy likes to go out with friends and go to movies. “I like movies with a point, where I can learn something,” he said, “but no chick flicks.” He used to collect pins but quit when he got too many. All of the stuffed animals goes to his sister, who keeps them in her room. Murphy is also known for chatting on skating forums on the Internet, posting what’s going on with British Columbia skaters. He also enjoys travel. “Courchevel was amazing,” he said. “It had beautiful mountains. I’d like to go back to Slovenia and I’ve never been to Asia so I’d like to go to Japan and China someday.”

He plans to compete until 2010 and hopes to eventually reach the Worlds and Olympics. After that, Murphy said, “I’d like to do some coaching, but I’m taking classes in journalism now at the British Columbia Institute of Technology. I started in September, just taking a few courses in my spare time. My best subject was English in high school and I’ve read a lot of novels in the past.” Murphy also works at The Bay to help fund his skating.