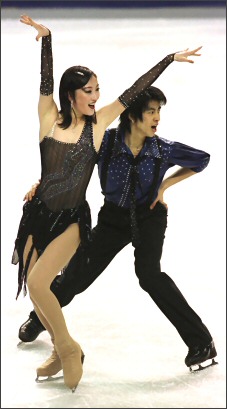 China's three-time ice dancing champions, Fang Yang and Chongbo Gao, made a good impression on the judges and the crowd at the 2004 Four Continents Championships.

China’s three-time ice dancing champions, Fang Yang and Chongbo Gao, made a good impression on the judges and the crowd at the 2004 Four Continents Championships in January, finishing sixth in the field and ahead of the national bronze medallists from both the United States and Canada. That was a solid improvement from last year’s tenth place finish. Now the dancers are planning on attending their first worlds, where they hope to finish in the top 16.

Gao began skating when he was six. “Most skaters start because their parents like skating and want them to do it or because they want their children to be more healthy,” Gao said. “My mother sent me for both reasons. I competed in singles for a year and then the coaches chose me for dance when I was nine. I like it because it’s more artistic. I like the performance and showing beautiful movements on the ice.”

Yang also began skating when she was six. “Before I started, I was very weak,” she said. “I went to the hospital every month. My parents thought that soon I would be going to the hospital every week so they sent me to skate for my health. I skated in singles for a few years, but stopped in 1993 for a year because my parents thought it was too hard for me to fall down all the time. I took traditional Chinese dance classes instead. But my coach came and asked me to try ice dancing. He put us together. Gao was my first and only partner, but I’m his third partner. I like ice dancing because it’s like regular dancing.”

The dancers train in Beijing with coach Bing Han. They work for four hours a day, six days a week, plus another hour of off ice training. “During the busy season, we sometimes go all seven days,” Gao stated. Last summer, they spent almost three weeks training with Natalia Dubova in Connecticut. “It was our first time training abroad,” Yang said, “we were suppose to go early in the summer, but because of SARS, we could not leave China. We had to rush there and rush back for our first competition.”

Dubova selected the music for the couple’s programs. They are using Boogie Woogie and Blues for the swing combo original dance and Overture and All That Jazz from the Chicago soundtrack for the free dance. “We watched Chicago and knew the music,” Yang said, “but I don’t think the style fitted us very well. We like to skate to anything slow and soft. For the compulsory dances, we like the waltzes and he tangos, but we’re tired of the Yankee Polka. They picked it at every competition this year. We did it too many times.” Dubova choreographed the original and free dances with assistance from Han. Before this season, they often did much of their choreography themselves. Neither of the skaters plays an instrument, but both enjoy singing karaoke. He also listens to rap music, while she prefers more melodious tunes.

Among his off ice interests are playing basketball and billiards, watching hockey, playing computer games, surfing the Internet, and watching movies – mainly fighting films, like Kung Fu. “I’d like to go swimming but I can’t,” he said. “I have no feeling for the water, only for frozen water.” She most enjoys shopping, partying, and watching comedy movies at home. She goes out with friends to the disco, but not often. Gao collects lighters, while Yang collects only the stuffed toys that fans throw on the ice. Both of the skaters enjoyed traveling to Germany. He liked the history of the country, while Yang said, “I’m a quiet person. I liked the silence there and in Norway.”

Both skaters have finished high school and will begin attending the university in July as sports majors. “We are thinking about being coaches,” Gao stated. But we will compete for at least four more years. In ice dancing, the older you are, the more feeling you have for the dance and the more experience. It’s not like in singles. You can dance for a long time.”