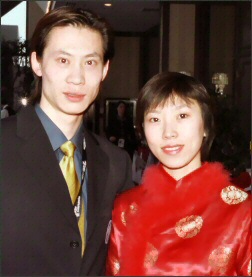 China’s Qing Pang and Jian Tong won the 2004 Four Continents Championships in Canada in January. They also won their second Chinese Nationals this season. They had been second five times. “We are eager to be champions again for a long time,” Tong said. “We’re always trying to be the best. We’re hoping for the top three at Worlds this year.”

The pair also won the Four Continents Championships in 2002, finished fourth at Worlds in 2003, and placed ninth at the 2002 Olympic Games. They won their first Grand Prix event in 2003 at Skate America, and then took the silver at the Cup of China and Cup of Russia to make the ISU Grand Prix Final, where they finished fifth. They will keep skating for at least one more Olympic Games.

Tong began skating when he was six. “I was a roller skater first, when I was five,” he remembered. “Then a coach found me and said I had talent and could be a figure skater. I competed for five years in singles and two more years as an ice dancer. I won the gold medal in my province in juniors and was third in China in juniors in singles. In dancing, I was second in juniors at Nationals.”

“I was taking ballet when I started skating,” he said. “I was gifted for dancing. Even now, everyone thinks I’m a dancer. I thought the jumps were too hard and I didn’t like falling so I decided to be a dancer. But dancing wasn’t as challenging. I couldn’t reach a high international level in dancing. So pairs became more attractive than singles or dance. I like it better.”

“I began skating when I was six,” Pang said. “All the schools had outside rinks so I went with my class and fell in love with skating.” She landed her first triple salchow when she was eight. Between 1985 and 1993, Pang competed in singles, placing as high as sixth in junior ladies in China, then she switched to pairs. “I find the technical parts and elements to be more challenging and more fascinating, especially the throws and spins,” she said. “I like throw jumps the most. Our hardest one is the quad salchow.”

“Bin Yao put us together in 1993, but then he had to leave to coach the national team so we had no coach for a period of time,” Tong noted. “We had to find our own way to train ourselves. So we watched videos and talked to each other. That’s why we have our own specialties, different from other pairs.” Later, they returned to working with Yao. Pang and Tong train in Harbin. “When we are very busy, we train for three to four hours a day, including off ice,” Tong said. “In the summer, we work six or seven hours a day, five days a week.” Off ice, they do bodybuilding and conditioning, plus ballet in the summer, six times a week.

Yao and Hailan Jiang are their choreographers. Yao found the music for their short program, Illumination by Rolf Lovland, while Leann Miller suggested the music for the long, Rachmaninoff’s Variations on a Theme of Paganini. The short is from last season, while the long is new. “The coaches show us the music and we pick and choose,” Tong explained. “I like very fast music when I skate. The rhythm is more challenging and makes me feel more active. Classical music fits us best. I have a special liking for Rachmaninoff. I like the rhythm very much. Last year we also used Rachmaninoff.” Pang added, “At first I didn’t know opera music, but then I realized I loved it.” Off ice, Tong listens to popular music, usually rock and roll, except when he’s reading. Then he likes to play classical and other soft music.

He loves playing video games and fishing in the lake. “Some day I want to live near the sea so I can fish there,” he said. “I have all the equipment for it.” She likes to read fashion magazines and novels, go on the Internet, and go shopping. Both skaters like sports. She enjoys bowling, basketball, and horseback riding, while he likes all kinds of sports including basketball, bowling and golf. She most enjoyed traveling to France and Switzerland because of the scenery. She collects skating pins and key chains, while he collects stamps from China and sports stamps from all over the world.

Both skaters are in their final year at a sports college and will graduate in July 2004, but they are not sure of their future careers. “If I were a coach, I would be the very best coach,” Tong said, “since I once had the experience of training ourselves.”