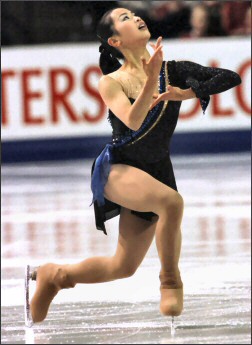 While many of the Japanese ladies have been inspired by Midori Ito to focus on the technical side of skating, balletic Yukina Ota has focused on the artistry involved in the sport. Her heroine is Yuka Sato, the 1994 ladies world champion. “She has a good balance of everything – jumps, skating, edges, and artistry,” said Ota. “I have met her and she has helped me on how to use my edges and change the tempo in my program.”

The 17-year-old from Kyoto stunned the more experienced senior skaters when she won the Four Continents Championships in Hamilton, Ontario, Canada in January. Ota finished third in the short and second in the long to take the gold medal. “I was really proud to be there,” she said. “I wanted to show my skating in front of a big audience and not be afraid to skate for them.”

“My hardest competitions have been the Japanese Nationals and NHK Trophy,” Ota said, “mainly because they were at home. I learned a lot from Junior Worlds and the Junior Grand Prix Series about the international experience, how to practice, and how to conquer jet lag. There were a lot of skaters from the same generation and I made a lot of friends.”

Ota began skating when she was four. “My brother had a figure skating class so I went with him,” she said. “I landed my first triple toe loop when I was eleven. It’s my favorite jump. I haven’t tried a triple Axel or a quad jump. I need to build up the muscles in my upper body first. I like spins better. That’s my favorite part of skating. I’ve seen Lucinda Ruh on television and I like to try new positions.” Ota is a good jumper, using a triple lutz/double toe combination in the short and the long as well as a triple toe/double toe in the long. With her musical sense, Ota would have made a good ice dancer. “I was interested in doing pairs or dance,” she said, “but it’s very hard to find partners in Japan.”

The lovely youngster trains with Mie Hamada, her first and only coach, who was a friend of her father’s. She works on ice for three hours a day, six days a week and does an hour or an hour and a half of off ice training. She has also taken ballet once a week since she was nine. “My coach recommended that I take the class and I love it,” she said.

Tom Dickson choreographs Ota’s programs, although Hamada helps with the choreography. Usually, she changes one program each year, but since she switched exclusively to seniors this year, both programs are new for this season. “Tom and I went to see my daughter do a Japanese dance and we thought the music would be good for Yukina,” Hamada said. “You can really feel the dance movements in her short program. “The short program music is Picasso’s Dance and Omotai from Between Black and White.” For the long program, Dickson selected Daphnis and Chloe by Maurice Ravel. “Tom really liked the music a lot,” Hamada noted. “I made a few changes so the program would be more dramatic at the end.” For her exhibition program, Ota skates to Donna Summer’s Last Dance. Her favorite music is classical. She has played the piano since she was four, but had to quit her lessons because she was so busy with skating and school.

Ota, who is in her second year of high school, is very serious about her studies and can often be seen studying in the rink at events. She likes calligraphy and gym as her favorite subjects. “I plan to go to the university to become a lawyer or a sports psychologist,” she said. “Yukina is very smart,” said Hamada. “She is an honor roll student.” Ota also likes studying English but said, “I read more than I talk.” She loves to read, especially books on psychology.

To relax, she likes to take walks, watch movies, go shopping, listen to current music, and chat with friends on the Internet. Ota also collects skating memorabilia and keeps all of her stuffed animals in her room at home. Ota likes to go to the beach on holiday, but she likes traveling to competitions. “I liked Milan and Canada most,” she said. “Milan was a very historic place with lots of memorable places. Canada has very beautiful scenery and the people are very warm. They make me feel comfortable.” She would like to go to France some day.