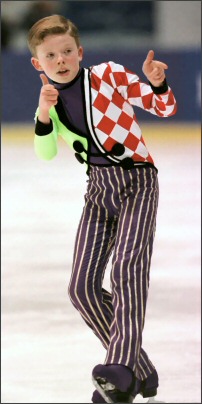 Thirteen-year-old Kevin Reynolds was a huge crowd favorite at the 2004 Canadian Nationals in Edmonton, just as he was at the 2003 Junior Nationals in Brampton. A large group of ladies chanted, “Kevin, you’re the next Canadian Idol” as he took the ice for the free program. “I was surprised that I had so many fans and that so many people came up to me for autographs,” he said. The charismatic youngster, who won the novice men’s title last year, challenged for the junior men’s gold against skaters nearly twice his size, finishing fourth. “My goal was to make the Junior National Team and I reached it,” he said. “I want to win next year.”

The diminutive redhead began figure skating when he was five. “I was playing hockey and I thought figure skating classes would help my hockey,” he remembered. “My dad played recreational hockey, but I’m the first figure skater in the family. I played in a novice hockey league for three years on defense because I could skate backwards really well, but then I had to quit because I was too small.”

Reynolds began training with Joanne McLeod when he was nine and soon began his mastery of triple jumps. He landed his first clean triple salchow when he was ten and landed a clean triple toe loop two weeks later. The remaining triples came quickly so now Reynolds is working on his triple Axel. “I’ve landed it on two feet, but not clean yet,” he said. “I even tried it in my long program. I hope to have it soon. I also started work on the quad toe last summer.” Reynolds has also landed a three jump triple combination – lutz/toe loop/loop. “Emanuel (Sandhu) gives me a lot of help,” Reynolds added. “He gives me someone to look up to.”

He practices about two hours a day, five days a week, in the summer and three hours a day in the winter. He also tries to get in another hour and a half on Saturdays. Off ice he does a lot of jump training. “I’m trying to get that fast twitch you need for the triple jumps,” he said. “I also do a bit of ballet, three times a week. It helps me with my flexibility, but I’m not flexible enough for a Biellmann. I like jumps and I like spins, but I really like the atmosphere of competing. I haven’t done too many shows, just some local ones and Stars on Ice when it came to Vancouver. It was hard to skate with the spotlights, especially in front of 17,000 people.”

McLeod choreographs all of Reynolds’ programs. “She’s a really nice coach,” Reynolds said. “She picks all my music for me. I don’t listen to music much myself but I like to skate to anything but heavy metal. It’s fun to get the audience going. The more they get into it, the more I get into it.” This season, he is using Duel by Bond for the short program and Gershwin’s Concerto in 7 Major and Crazy For You for the long. McLeod, who likes to compare Kevin to Tiger Woods, said, “Tiger had an encouraging Dad and constantly broke records at such a young age.”

Reynolds is in grade eight. He’s home schooled because that works better with his training time. “Math is my favorite,” he said. “And I have to read a lot for science.” But he’s not sure what he wants to do for a career.

Off ice, Reynolds likes tobogganing and sometimes plays video games. He said he doesn’t use the computer much because he’s not a good typist. “This was the first time I got so many toys,” he said, “so I don’t really have a collection. I collect pins from the different countries that I’ve visited. I’ve been to Austria, Slovenia and France. Slovenia was my favorite. It was snowing in April. Then we went to Venice afterwards. It was amazing, especially that big palace. I’d like to go to Rome and see all the sights. I like the history of it.”

Reynolds, who plans to compete until the 2010 Olympics, also won two other novice events in 2003, the North American Challenge Skate in Edmonton and the Triglav Trophy. Next season, he hopes to get some Junior Grand Prix assignments and eventually become Canadian champion and go to Worlds.