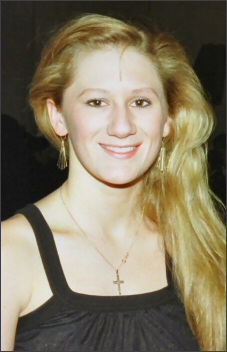 Sarah-Yvonne Prytula got into figure skating when she was seven.

Australia’s Sarah-Yvonne Prytula has her future all mapped out. The19-year-old has been working towards a career in the design field. “I just finished my exams to complete my first year at university,” said Prytula, who turns 20 in May. “The first two years cover everything in design,” she explained. “I’m now thinking about environmental design – landscaping, buildings, architecture, but I’m not sure where I’ll finish. I even designed some jewelry.”

Prytula got into figure skating when she was seven. “My brother was involved in a lot of sports,” she said. “He played ice hockey so I went to the rink to try skating. Eventually he quit and I stayed. I tried pairs some for fun when I was young, but I never tried dance.” She landed her first triple loop when she was 13, but considers the toe loop to be her favorite jump. “I plan to work a lot this year on making my triple jumps more consistent,” she said. “That’s one of my personal goals.”

Prytula trains at the new Norwest Glacarium in Sydney with Galina Pachin. “It’s a beautiful rink but I have to drive two hours each way to skate,” she said. “so I do about ten sessions in five days for an hour each. Off ice, I don’t do very much, maybe two hours a week.” That doesn’t include ballet. “I took a lot of ballet between the ages of three and 13,” she said. “I did a lot of recitals and performed in a troupe called Dynamite. But ballet was more structured and I’m more of a free spirit, so I liked skating more. But the ballet helped me with my positions and presentation on ice.”

She works with her coach to select each year’s music. “Galina and I listen to music and usually we’ll catch on to something nice,” Prytula noted. “Both of my programs are new this year. Usually I only change one.” For the short program, she is using Sahara by Bond and Frida for the long. “I’m more of a classical music girl when it comes to skating,” Prytula said. “But I like skating to Spanish guitar music. I just listen to pop off ice. I go through phases, but I definitely don’t listen to the boy bands. I tried piano a little when I was young, but I couldn’t sit still for lessons.”

Prytula isn’t involved in too many activities off ice. “I like to go out with my friends and go to the beach and lay in the sun,” she said. “I do keep my skating pins and all of the toys. It’s very sweet that people think of you and throw you things. And I have lots of pets. I have two dogs, including a black Russian, a sun conure, and a carpet python over two meters long. The snake was my brother’s, but he moved out and the snake remained. He stays in his cage, but when I was younger and the snake was smaller, I used to wrap him around me.”

She enjoys her skating trips. “I’ve never had a proper holiday,” she said, “so Joanne Carter and I went to Whistler and Vancouver after Four Continents. This was my first trip to North America so why waste the opportunity? We tried skiing.” She also enjoyed events in Japan and China. “Japan was so well organized and the people were so appreciative,” she said. “The atmosphere was really good and the country was beautiful. China was an experience as well. I went to the markets a lot with the girls and saw the Great Wall. All the traffic with all the bicycles was a fantastic thing to see.”

“I’ll skate as long as I enjoy it,” she said, “but it’s more pleasure on my side. The challenges I’m meeting make me feel good so I don’t put pressure on myself to get a certain placement. I just hope to keep in the top three at Nationals and stay as high at Four Continents.”