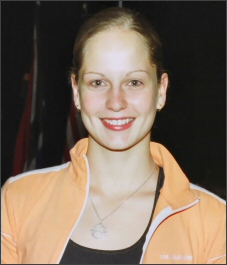 For the first time in 12 years, the Republic of South Africa has a new ladies figure skating champion - Jenna-Anne Buys.

For the first time in 12 years, the Republic of South Africa has a new ladies champion. Jenna-Anne Buys dethroned twelve-time ladies champion Shirene Human, earning a trip to the World Championships as well as another visit to Junior Worlds and Four Continents. “It’s been a very good year for me,” said Buys. “I just want to skate my best and enjoy myself while I’m doing it. My ultimate goal is the Olympics in 2006 or 2010, but I have to enjoy myself to get there.”

Buys was a late starter in skating, not taking to the ice until she was nine. “I went to the rink in our town with my mother and her friend,” Buys stated. “I really liked skating so I started lessons within a week.” Before that, Buys had been involved in rhythmic gymnastics for a year, but hadn’t reached the competitive level. The 18-year-old is a multi-sport athlete. “All through school, I competed in swimming and athletics,” she explained. “I did everything except the backstroke in swimming, and I did that in the intermediate medley. I did mainly the short distances. In athletics, I did the high jump, the long jump and distance races. I got school letters in both swimming and athletics.”

She still swims and runs for conditioning, although she hasn’t competed since graduating from high school. That’s part of the ten hours a week she spends in off ice training. Buys also trains two to three hours a day between three and five days a week on ice. She trains with Lisa Stigant, who also does her choreography in conjunction with Buys mother, Adele, who got involved in skating after her daughter’s career began.

Stigant selected most of the music that Buys used for this season’s programs. The short program is to Spirit of the Dance, while the long includes Allegretto by Bond, selections from the soundtrack of the movie Mighty Joe Young, and music from Cirque du Soleil. “I was watching Mighty Joe Young and I thought that it would be good skating music,” Buys said. “I had to get the music from the DVD because we could find the soundtrack on CD. I usually like strong, energetic music to skate to, but I listen to a mixture of things off ice. At the moment, I like All American Rejects and Avril Lavigne. Buys isn’t musically inclined although she played the recorder in school.

To relax, she likes to spend time with her family and friends, go to the mall, and watch movies. “I like action movies and I quite enjoy thrillers,” she said, “but I don’t like those stupid comedies with Jim Carrey. That’s against my nature. Some of my favorite movies are Cool Runnings and Mulan.” She collects pencils, but doesn’t keep most of the toys she receives on ice. She donates the stuffed animals to several charities. “I’ve been involved with AIDS babies and orphans through my church youth group,” she added. Buys also likes to keep up with skating news through the Internet and to email friends.

She is looking forward to her trips to the Netherlands and Germany in March. “I’d like to go to Paris and see the Eiffel Tower,” she added. So far, her trip to China has been the highlight of her travels. “It was so different there,” she said. “I went to the Great Wall and it was like, wow! It was hard to communicate with people who spoke no English but it was kind of fun acting out what I was trying to say. I’ve never been west before, so I liked coming to Canada for Four Continents.”

Buys doesn’t plan to be a skating coach after she finishes competing. “I’d like to go into orthodontics. I have to take two subjects before going to university,” she said. “When I was in high school, I was a pretty good student. I liked biology and creative writing. I liked to write at school.” She speaks, English, Afrikaans and a little Zulu.