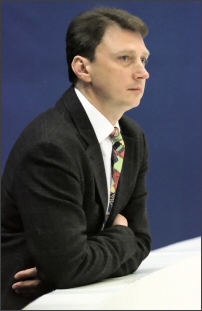 Oleg Vasiliev, the 1984 Olympic champion and 1988 Olympic silver medallist in pairs with Elena Valova, now coaches skating himself. His primary focus is the team of Tatiana Totmianina and Maxim Marinin, two-time Russian pairs champions and two-time World silver medallists. When he skated, Vasiliev trained with the dean of pairs coaches, Tamara Moskvina.

“I never wanted to be a coach,” he remarked. “I saw how difficult a job it was and how hard Tamara worked. It looked too difficult. Definitely what I didn’t want to do. But I graduated from the Institute for Physical Culture in St. Petersburg, like most Russian skaters. I learned a lot from Tamara, all of the basics. But I have changed some details. Maybe I use a little more psychology to prepare my skaters. Right now I love coaching. I plan to do it as long as I live. It makes a big difference in how you feel about yourself if you’re in the right place doing what you’re supposed to do.”

“I started skating when I was only five,” he said. “My parents decided that I should skate. I had pneumonia two times that year and the doctor recommended to them that I do some sort of outdoor activity or sport. At that time, figure skating was an outdoor sport, so my parents took me to skate. Until I was 18, I was a singles skater, and then I started pairs. I was with my first partner for only three months because there was no connection between us. So Tamara split us up and matched me with Elena Valova.”

“I enjoyed competing,” he recalled. “I remember the Olympics like it was yesterday. It was like a huge holiday. We worked for a few days and then we had off. It was very exciting with all the different athletes from the different sports. I watched skiing, hockey, luge, speed skating, even curling. But I missed the opening ceremony because we had to skate the next day and the closing ceremony because we had to leave early. After we won, we got to meet all kinds of famous people, like the president and famous artists and other interesting people. We got $500 for winning the gold medal. But I didn’t skate for money. I skated for the love of the sport and the pleasure it gave me. You can always tell the people who skate for money or for their own pleasure.”

“Traveling was the most exciting thing about competing,” Vasiliev stated, “because in the Soviet Union, it was very difficult, almost impossible to leave the country. I saw many other people and other cultures that not many people had an opportunity to see. I saw countries from the Far East to America. I even did a show once in India. I like France, Italy, Germany and most of Europe. They have a lot of history and culture there and the people are different.”

“Elena and I competed together from 1979 to 1988,” he continued, “then skated as professionals and did shows until 1995. We did the Tom Collins shows and the Michael Rosenberg shows and a tour of Australia. We did Russian ice shows and even tried Holiday on Ice, but that didn’t work out. The most memorable was the Brian Boitano-Katarina Witt show that we did for three years. There were a lot of good skaters and it was a good atmosphere. Everyone worked to help one another. Then the owner died in a helicopter crash and the show ended. In 1995, Elena had a baby so we stopped.”

“In Russia, there are not many ice rinks but there are a lot of coaches,” Vasiliev noted. “To work there, I would have to steal students from other coaches and I didn’t want to do that. So I decided to start somewhere abroad and see how I could do in this field. Conditions for work were better and there was not as much politics. I started coaching a Latvian team, and then I worked with a French team for two seasons. I moved in December 1997 to work in Chicago and it took me three years to get my green card. Three years and $11,000. Now I work in two rinks, The Edge in Bensenville and Oakton Ice Arena in Park Ridge. From April to October, I have a lot of kids, mostly American singles skaters, but in the winter I spend a lot of time out of Chicago with Tatiana and Maxim and don’t have time for too many other skaters.”

He has worked with Totmianina and Marinin for three years. “Tatiana and Maxim asked Tamara Moskvina several times to coach them,” he stated, “but she said no. She already had two teams. Tamara recommended me the first time, in 1998, but I had no connections and no ice so I told them no. Then on New Years Eve in 2001, Tamara asked me again and I told her I’m ready. So we met with Tatiana and Maxim, made the decision to work together and the federation approved it. It was an unpredictable situation and I had to decide how to manage them and find the right way to do it.”

“I try to let the skaters have their own different styles,” Vasiliev said. “At first, I tried to work with other people, but it didn’t work and I did everything myself. It was my mistake and I paid for it. Now I invite other people to do the choreography for my skaters and I let them work. Giuseppe Arena helped a lot with last year’s program and the new program. I like more classical programs; probably 70-75 percent of my programs were classical. But it’s good to have skaters trying all kinds of different styles. We have a couple of more years to try things before the Olympics. I’m not looking for any other couples before the Olympic Games. One couple is enough when you are fighting for first place.”

Vasiliev supports the proposed change to the new Code of Points judging system. “The system will change,” he said. “If you know it, it can work for you. If you don’t, it can be kind of tough. I have studied the system and know it pretty good, not 100 percent, but pretty good. This season, we did more difficult lifts in the long program and added more elements to get some extra points. Sometimes some small changes in the choreography, some small details, can get you extra points. When everyone is so close, one point can be a big difference. For the new long program, I designed it with the Code of Points in mind. I tried for more Level 3 elements, which should help in any judging system.”