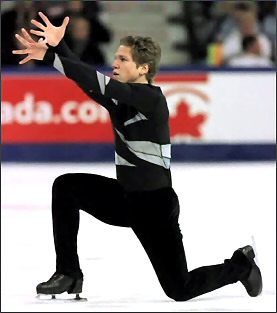 Jayson Denommee won the Canadian novice men's figure skating title in 1994, finished second in junior men in 1996, and won the silver in senior men's in 2001.

Canada’s Jayson Dénommée has medalled at the three top levels at Canadian Nationals, but has yet to win the gold medal in seniors although he has placed in the top ten for seven of last eight years, missing only 2000 when he was felled by illness. He’s been in the top five on four of those occasions. Dénommée won the Canadian novice men’s title in 1994, finished second in junior men in 1996, and won the silver in senior men’s in 2001. This season, he finished 7th after errors in the short program left him out of contention.

The 26-year-old has been skating since he was seven. “I started like every good Canadian boy that wants to play hockey to make my Dad happy,” he remembered. “But then I decided that I liked figure skating instead. I played hockey in a garage league for fun, mainly defense. I was small but I could skate backwards well.” He landed his first triple jump, the salchow when he was 15. “I like all the jumps except the triple sal,” he remarked. “I’ve been seriously working on a quad for a year, but I keep getting shin splints, just unbearable pain. The longest I can practice them is about three weeks. I’ve landed a couple and might put it into my program for competition hoping that the adrenaline gives me the few additional centimeters I need to land it. I don’t want to land a cheated jump. I want it to be nice and clean.”

Dénommée switched coaches this season after working nine years with Josée Normand and now works with Stephane and Thierry Yvars and Ian Connolly in Boucherville. “It’s the first time I’ve been with male coaches,” he noted. “The focus is totally different. There’s lots of planning and goal setting. I know what to do every day since it’s all written down. It’s not just about the jumps. It’s more like you should feel like this in three weeks, like this in five weeks, etc. I’ve been in such good shape that my confidence level has been way up.”

Annik Schmidt and Julie Brault choreograph his programs, but Dénommée always picks his own music. “I try to always change both programs,” he noted. “I like to reinvent myself every year. I get comfortable with my programs quickly. I start in March or April so they’re ready in summer. But last year I was just not there. I didn’t feel good in the programs. I had the wrong perspective. Sometimes things just don’t click.”

This season he used Danse of Curse and Black Escaflowne for the short and Four Rooms, Darla’s Premiere and Blues in the Night for the long. “For the short program, my choreographer’s daughter liked the music so I rented the movie and watched it. It felt very natural. The long program is based on the movie Oceans Eleven, one of my favorite movies in both the old and the new version. I liked the songs from the new one and the feeling of the old one so I tried to do something to combine them. I found music that I liked and felt good skating to.”

“What I like to do most is something I’ve never done,” he added. “I listen to everything, but I’m a rock type of guy, long hair and spandex — bands like U2, Bon Jovi and Phish. I also like Canadian and U.S. folk music. I’m into everything except techno. I always try to play music myself. I can play guitar and a little piano. Everyone in my family was a musician. If I didn’t play, I’d be the black sheep. Sometimes I’ll go into a guitar shop and just look at them.”

“I’m addicted to cinema,” he remarked. “I need to go as often as I can, at least once a week. I love Japanese anime. The action is powerful. I’d actually like to be a filmmaker. Right now I’m a video editor in my third job. Skating’s my first job and coaching skating is my second job. I’m almost finished with college, but it would be pointless to go to university to be in film making because your portfolio gets you accepted. I need to put skating first. I tried doing both school and skating together, but it didn’t work out. I started CEGEP in social studies but went into writing because the writing process is important in filmmaking. I don’t need math and economics, which I wasn’t good at.”

He likes to travel. “I find at least one thing I like about every country,” he said, “but there’s no place like home. Japan was memorable because of the way people interacted with you. Germany had great food and France had good wine. Paris was very beautiful. And I was amazed by how nice the people were in Russia.”

Dénommée is also addicted to computers. “We have four computers at home, each with its own function, including the video editor,” he noted. “My girlfriend (Genevieve Denis, also a figure skating coach) says the computer’s my mistress.” But she’s the one that he’ll be marrying next July. “We’ve known each other for eight years, but only decided a year and a half ago,” he said. “She’s very patient and supportive and knows what it takes to succeed. She wants so much for me.”