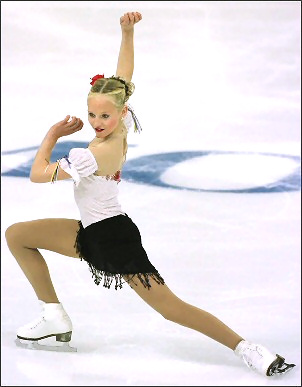 Terra Findlay was a busy girl at Canadians, figure skating in both junior ladies and junior pairs.

Findlay comes from a skating family. Her mother is coach and choreographer Sandra Findlay, while her father and brother are both hockey players. “My mom took me to the rink with her,” Findlay said. “I either had to sit in the stands or learn to skate.” She began at three and landed her first triple toe loop when she was eleven. It’s still her favorite jump. One of her goals from this season was to make all her triples consistent. “Last year all I had was triple salchow and triple toe,” she said. “I was moving up kind of a lot to learn all five triples and I got a little unfocused so I dropped the triple flip from my long program. I’m landing triple lutz about three times in ten but I keep coming off the edge. I think I like toe jumps more.”

This is Findlay’s second season in pairs. “I always liked pairs when I watched on television,” she said. “I had tryouts when I was younger, but I wasn’t ready yet. When I tried out with John, I really felt we had potential so I tried it and I liked it. I was really disappointed in the short so I was thinking we wouldn’t be on the podium, but the long is always our strong point and we really wanted to skate well. The throw jumps are the hardest but it was a shock when I missed them. I just need to turn more. I like the lifts and twists most so it’s really weird that I like the twists most but didn’t do it in the short. But we’re really happy where we finished.”

Her mother choreographed both of Findlay’s programs for ladies. For her short program, Findlay skated to Zorba the Greek. For the long, she used Sabrina and Amelie. “Usually I only change one program each year,” Findlay said, “but I had each of my last year’s programs for two years. I like fast peppy music but this year the long program is slower. I like it. It’s really elegant and brings out a different version of me. I live with the Buttles in Barrie so when it’s time to pick the music, I listen to a lot of things with Jeff, then show it to my mom to see if she’s OK with it.”

Findlay trains at the Mariposa School of Skating with Lee Barkell, Doug and Michelle Leigh, and Shane Dennison. She trains for two hours in ladies and two hours in pairs five days a week, running through all four of her programs every day. That doesn’t leave too much time for off ice work, but she does Pilates twice a week and another hour and a half of conditioning work three days a week. “I did do some ballet, but it didn’t work out with my schedule,” she noted.

The talented youngster is in eighth grade, taking classes at a public school beside the rink in Barrie. “French is my favorite subject,” she said. “I like learning about it. It’s fun to know different languages. I plan to go to the university but I’m not sure of what to study. I like school teaching.”

To relax, Findlay likes to go to the movies or hang out with her friends. “My favorite movies are comedies and Finding Nemo,” she said. “I like to read, but not too often. But I go on MSN a lot.” She collects Beanie Babies but likes to go with Buttle to give extra toys to children in area hospitals. In the spring, she likes to play baseball, usually as a pitcher. She wanted to play volleyball on her school team but practice conflicted with her skating schedule. Findlay also participates in track meets, usually at 1500 meters.