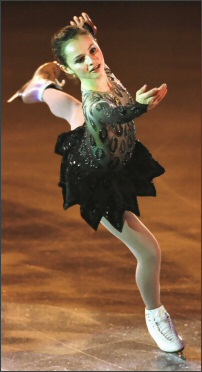 For years, Sasha Cohen has been viewed at times as a 'porcelain ballerina encased in glass'.

“My plan is to attack and skate full out,” Cohen said at today’s press conference, on her approach for the upcoming World Championships. “No holding back.”

The three-time and current US National silver medalist has been working for nearly three months with her new coach, Robin Wagner, and feels both confident and excited about the upcoming event.

“It’s been a great process,” said Cohen, of her new relationship with Wagner. “I learn more about her every day and love spending time with her, both on and off the ice. Robin is very positive and I think she’s going to help me be very comfortable and confident [at Worlds] and I’m very excited about this competition.”

For years, the 19-year-old has been viewed at times as a ‘porcelain ballerina encased in glass’. When asked if she plans to break out of that glass, Cohen replied, “I definitely do. When we practice our run-throughs there’s no holding back. Robin has me skating full out and skating big.” Cohen feels that Wagner’s training philosophy has really influenced her figure skating in that regard.

“I think Robin’s a very energetic coach,” said Cohen. “She’s very positive, understanding and patient. As far as a coach goes, I feel she has all the components that makes a brilliant coach.” Cohen emphasized that Wagner really knows and understands that everyone is different. “She listens, which is so important,” Cohen continued with admiration. “She’s really smart about her decisions.”

Cohen is optimistic and happy with her current coaching situation despite the change in mid-season. “It’s definitely different,” she said, “but I really enjoy Robin’s training techniques. She brings very positive energy to every practice. We get a lot of work done.” Cohen, who placed fourth at the last two World Championships, added, “Practice has been a little longer and Robin has really helped me to work on the base on my stroking; including control, position and posture. It’s really helped to get speed in my program, in correct positions as well as in jumping.”

Due to a good rapport with Wagner, Cohen didn’t feel any apprehension about making the switch when she did. “I think of myself as pretty adaptable,” stated Cohen. “Robin’s a great listener so if I’m not comfortable with anything, I can always let her know and she’ll work with me.”

Despite various points of view from media and fans on splitting with former coach Tatiana Tarasova, Cohen insists that it was just time to move on for both of them. “Tatiana was a good coach,” maintained Cohen. “We still speak when we see each other and while Tatiana was pretty much set in her ways, I still learned a lot from her. On and off the ice. I will remember and use those things in the future.”

On staying with Wagner during the week to cut down on commuting time, Cohen said, “I think it’s a good experience. It’ll make me stronger.” Cohen went on to say, “It just makes me realize what I want to do and the sacrifices I’m willing to make. Knowing that I have a coach that is willing to make the same sacrifices makes us a strong and committed team.”

In addition to her coach, Cohen also feels that fans influence her skating. “It’s always great to get a new perspective,” said Cohen. “When I read fan letters, it brings me back to earth. The fans are so sweet and supportive, letting me know that I make a difference and/or being a good role model. It’s really special because you can get really caught up in competing and training, but the fans are there to keep you grounded.”

Cohen was off to a strong season, winning three Grand Prix events and placing second at the Grand Prix Final. At US Nationals, she was first after the short program but fell to second overall after falling on a triple toeloop and stumbling on a triple Lutz in her long.

“I think it’s really all about the training and coming in prepared,” said Cohen, referring to getting back to good form. “I think I really have had the chance to do that. I’ve had two months since Nationals. I expect Worlds to be a great competition for me.”

Cohen felt that she had over-packed the front end of the season, competing in three Grand Prix events and other competitions. As a result, she wasn’t able to train as much as she would have liked. “I was all over the place,” said Cohen. “You can only do so much so well.”

When asked how she might end the doubts of those who feel there might be a replay of Nationals at Worlds, Cohen said, “I’ve done great performances in the past and I’d like to do more of them. Everyone’s different and you just have to keep working and try to get to where you want to be.” Cohen confessed that she didn’t have the answer to all those questions yet. “I’m still answering some of those for myself,” she said. “I’ve put in the time everyday in training. I’m working hard and I’m getting better, but I’m not where I want to be yet.”

Since Nationals, Cohen has incorporated some changes into her long program to Swan Lake, changing some of the music cuts in the beginning, middle and end. “Some of the order of the elements have been repositioned as well,” revealed Cohen, “and I think it makes for a stronger and more dramatic program. It flows really nicely and we’re really happy how it turned out.”

Cohen’s putting Nationals behind her, though. “I think everyone has those doubts,” she said, “but after you evaluate, you just put it behind you and learn from it so you can have a more successful performance the next time.” In her case, she continued, “It’s the training and I’ve been doing that. I know that I’m capable of skating great programs and I just have to keep working and trying again.”

With the new judging system onboard and going strong, this may be the last chance for a skater to earn a 6.0 at a Worlds event. “I haven’t even thought about that,” said Cohen. Supporting the Code of Points (CoP), she continued, “I like the fact that it rewards every aspect of a program. The complexity of the choreography, the connection of different moves, the quality of jumping, and [it] doesn’t forget about the spinning and spirals.”

Cohen, who placed fourth at the 2002 Olympics, feels there is a very strong field in the ladies discipline and takes nothing for granted. “They are all very strong,” said Cohen of her competitors, “and it depends on who puts out a better performance. It just depends on how everyone skates.”

Despite the strong competition, we won’t be seeing a triple-triple combination in Cohen’s programs at Worlds. “I’ve worked on them in practice,” revealed Cohen, “and they are coming along fine, but I don’t plan on using them in my programs for Worlds. They will definitely be a big priority over the summer.”

After Worlds, Cohen will begin touring with Champions On Ice. Of the 2004 US men’s champion, Johnny Weir, who will be touring with her, Cohen said, “I absolutely adore Johnny. He’s an amazingly gifted skater and an extremely hard worker. When he’s out on the ice, he doesn’t stop. He just trains and trains! He’s got great jumping ability. I think he’s got a great future ahead of him.” She continued affectionately, “As a person [off the ice] he’s very loyal. Really there for you. He’s got a great personality and he’s a lot of fun to be with.”

Cohen, who leaves for Dortmund next week, said, “I’m really excited about this opportunity and I think I’m going to have a great time at Worlds.”