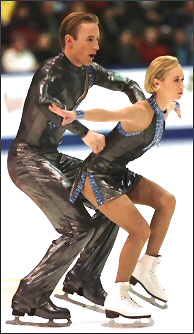 Julia Obertas is now skating for Russia with Sergei Slavnov.

Perhaps her third partner will be the right match for diminutive Julia Obertas. She is now skating for Russia with Sergei Slavnov, after reaching Worlds with two other partners in the past. Although she is only 19, Obertas is a seasoned veteran of international competition. She won the World Junior Figure Skating Championships twice and finished second once with Dmitri Palamarchuk while skating for her native Ukraine. The couple reached as high as sixth at Europeans and 11th at the World Championships, but split after a nasty fall on a lift at the 2000 Worlds in Nice left him unconscious and her unwilling to continue.

Obertas then teamed with Alexei Sokolov to skate for Russia. “I had always wanted to skate for Russia,” she said, “so when my mother moved there, it became possible.” The couple finished fourth twice in Russia while enduring the mandatory waiting period for changing countries, then made it to third in 2003 to qualify for Europeans and Worlds, where they finished fifth and eighth respectively.

Meanwhile, Slavnov teamed with Julia Karbovskaya to finish second, fourth and fifth in three Junior Worlds appearances and to win both a gold and a silver medal in junior pairs at Russian Nationals. Obertas and Slavnov decided to team up in August of 2003 because they wanted to skate with one another. “I love Sergei,” she said. “He’s a very nice guy and he likes to skate very fast.” Julia is a very beautiful and accurate skater,” he stated. “She is cute as a button.” The skaters then approached Tamara Moskvina to train them. “She is a good coach, one of the best,” Obertas said. “We wanted to try a partnership with her to improve our figure skating at the world level.” The partnership has proved successful as the pair finished third at Russian Nationals and fourth at Europeans, higher than they reached with their former partners.

Both skaters began skating when they were five. “My cousin was a pair skater for Ukraine so I wanted to start pairs too,” Obertas said, while Slavnov admitted that it was his grandmother’s idea to take him to the rink to skate. Obertas went almost immediately into the pairs program, but Slavnov remained a singles skater until he was 16. Then he switched to pairs because he liked it better. Both landed their first triple jump, the triple toe loop, when they were about the same age, Obertas at 12 and Slavnov at 13. The jump remains their favorite as they use a triple toe-triple toe sequence for their side-by-side jumps. The twist is actually their favorite element. “I can throw her very well,” Slavnov said. “I try to throw her so high she’ll stay forever but she always comes down.”

They practice for about two hours a day on ice five days a week with another hour on Saturday. Off ice, they do about 45 minutes of conditioning exercises before each practice and work with a choreographer on their movements. During the summer, they plan to do more off ice work.

Former coach Nikolai Velikov selected the music for their short and long programs this season. The short is to a Spanish theme, while the free skate is to The Truman Show soundtrack and Secret Garden by Rolf Lovand. “We don’t know the name of the short program music,” Obertas said, “because he found it for us. We kept the programs because we didn’t have time to change them. Because we’re a new couple, we don’t know what music will best fit us.” “I want to use something passionate,” Slavnov added. They are using Not Going to Get Us by TATU for their exhibition program. Off ice, Obertas likes Russian pop music while Slavnov prefers modern drum and bass music, some Turkish music, and Russian rock. “I like the typical Russian rock groups,” he said, “but the music is not suitable for skating.”

To relax, he plays soccer while she sometimes plays tennis. Obertas also likes to go disco dancing, go to parties, and watch movies, especially the most popular ones like Lord of the Rings. She used to collect spoons. “I had a lot of them, but I don’t collect them anymore,” she said. “I used to collect everything,” Slavnov said. “I had stamps, cigarette boxes, coins, car models, all kinds of things. But now I collect nothing.” As for travel, they both like to go to hot places. One of his favorite trips was to Turkey and she wants to visit there in the future.

Slavnov is in his last year at the Institute of Physical Culture, studying so he can become a coach if he decides to do so. Obertas has finished high school and will go to college next year. She plans to study English and get the education required to coach.

They plan to continue to skate “not less than ten years,” Slavnov said, then do professional shows. “I like to skate well at the competitions,” he continued. “but I also want to entertain the public. Praise comes from the audience although we are grateful to the judges who give the marks.” “It’s nice to get good places,” Obertas added, “but we just want to show our best skating. It’s a long process to get to the top and we are just at the beginning of the process.”