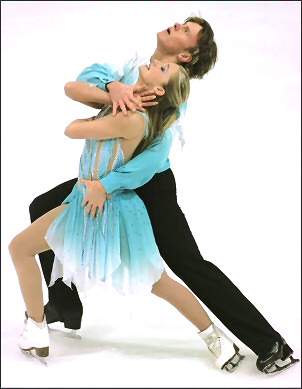 Ice dancers Mylene Lamoureux and Michael Mee are hoping to make the Canadian Olympic team in 2010.

Young Quebec ice dancers Mylène Lamoureux and Michael Mee are hoping to make the Canadian Olympic team in 2010. The couple finished ninth in junior dance at the 2004 Canadian Nationals after moving up from the novice level. In 2003, the dancers won the silver medal in novice dance at the 2003 Canadian Junior Nationals after winning both the Quebec Sectionals and the Eastern Challenge.

Mee began skating when he was seven. “I started taking hockey, then switched to CanSkate,” he said. “Kurt Browning was around and it made me want to skate. I played hockey in a community league for a few years, but then quit to concentrate on skating. I made it to the Quebec Games in freestyle, but decided to switch to ice dancing four years ago. I like the fluidity and movement on ice. In free skating, I enjoyed the skating rather than the jumping. Dance captures the spirit of skating and pushes it to the limit.”

Lamoureux was six when she began skating. “My mom was a coach so she took me along to the rink and signed me up for CanSkate lessons,” she said. “I started dancing three years ago. I like skating with another person and I knew I could go farther in dance than in freestyle. I also like the lifts and the other elements that you can do in dance but not in singles.” Mee is Lamoureux’s first partner, while she is his second. “She’s a great skater and we get along well together,” Mee said. She noted that Mee, “has a very positive attitude. He’s very nice and easy to get along with.”

The dancers train at Pierrefronds Figure Skating Club and the Ste. Julie Club with Julie Marcotte and Shawn Winter. They work on ice for about two and a half hours a day, five days a week and off ice for about three hours a week. “We do a little bit of ballroom dancing and gym training,” Lamoureux said.

Marcotte choreographs all of the couples dances. “Choosing our music is a group effort,” Mee stated. “Last season, we did a Latin free dance but this season, we wanted something to show our maturity. It’s a big jump between novice and junior.” For the 2003-04 season, Lamoureux and Mee used Gene Vincent’s Be-Bop-A-Lu-La and Jerry Lee Lewis’ Great Balls Of Fire for their swing combo original dance. Their free dance included Unity and Aral from Catherine Lara and Windmills by Violaine Corradi. “I like any kind of music that will bring something out of us,” Lamoureux said, while Mee stated a preference for waltzes, tangos, and the paso. Although she doesn’t play any instruments, Mee plays the guitar, saxophone and piano and used to play in his high school band. He still likes to jam with friends.

Off ice, she likes to snowboard, go out with friends and most of all, shop. He likes to ski, both alpine and cross country. He also likes to do a lot of canoe tripping and plays shinny hockey. They keep some of the toys they receive and throw some to other skaters. Neither skater collects anything else. For travel, Mee most enjoyed a trip to New Zealand for its beautiful landscape and would like to go to Africa. She most enjoyed a family trip to Hawaii and would like to go to the Virgin Islands. “I like hot beaches and sun,” she said.

Lamoureux is in her final year of high school, where her favorite subject is math. She plans to go to university in the future. She has no career planned, but would be interested in skating professionally, coaching and choreography. Mee graduated from high school and is now in CEGEP. He plans to begin studies at Macgill University next year, majoring in health sciences and biology for a possible career in the health field. But the dancers plan to compete as long as they can before going on to other endeavors.