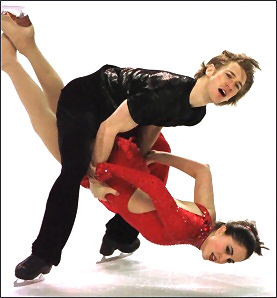 The unique ice dancing team of Loren Galler-Rabinowitz and David Mitchell continues to make its mark on the U.S. skating scene.

The unique ice dancing team of Loren Galler-Rabinowitz and David Mitchell continues to make its mark on the U.S. skating scene. Not only are they the country’s top native-born ice dancing team, they are also the only team where both partners are award-winning musicians and honor students who attend school full-time.

Galler-Rabinowitz is a senior at Buckingham, Browne and Nichols School in Boston and will graduate this spring. After scoring near perfect marks on her college entrance exams and winning the headmaster’s prize for academic achievement, she was accepted at Harvard and Yale. She plans to go to medical school and specialize in either fetal cardiology or pediatric orthopedics. “Lately I’ve become more interested in my mother’s work in malnutrition and brain development,” she added.

Mitchell will graduate this spring from Tufts University with a bachelor’s degree in political science with a minor in economics. “It was pretty challenging taking a full class load over the last four years,” Mitchell stated, “but I’m glad I did it. I didn’t want to be a perennial student. My class selections depended on the time the courses were given and the flexibility of the professors. With rare exceptions, they were very flexible. They either gave me assignments before I left or allowed me to make up work on my return.”

“I feel that I’ve had a wonderfully normal college experience,” he remarked. “I was a member of a fraternity, Delta Tau Delta, and served as Secretary and Academic Chairman. I’m glad that I had the experience. It made me appreciate what we have on the ice even more. Eventually I plan to go to business school, but for the next year or so, I’m looking for a part-time job. I’m looking into corporate sales and possible internships with consulting firms.”

This was the team’s first full senior season. Last year, they competed on the Junior Grand Prix circuit and finished fourth at the World Junior Figure Skating Championships, but competed in seniors at U.S. Nationals, finishing fourth. This season, they took the bronze medal at U.S. Nationals and placed ninth at Skate Canada, sixth at the Bofrost Cup, and seventh at the NHK Trophy, even though Galler-Rabinowitz had sprained an ankle before the free dance at Skate Canada which also hampered her at the Bofrost Cup. They finished the season by placing eighth at the 2004 Four Continents Championships. The couple also won the U.S. novice title in 2000 and the junior dance gold in 2002, making them only the second U.S. dance couple to medal in all three divisions within four years.

“This was a good foray into the senior competitive field,” Galler-Rabinowitz said. “It was a very good learning year. We feel it’s our time now and we’d like to move up. For next season, we want to make a really big push and give it everything we’ve got. We want to find out how far our talent, our love of the sport and our work ethic can take us.”

“We know we have to work more on our speed and power,” Mitchell added. “This season, we concentrated on improving our expression. We wanted to make our programs more intriguing to bring in the people more. When we came into the season, our only expectation was to gain experience and exposure and soak up the atmosphere at the senior events. It’s great to have the Grand Prix events and to be skating with skaters that we look up to like Navka and Kostomarov, Denkova and Staviyski, and Belbin and Agosto. As visual learners, we got to pick up different things from each team that we might incorporate into our style. We don’t try to emulate any other skaters. We don’t consider our style to be the same as the others.”

The skaters have been together since early 1998, when they were matched up by coaches Barret Brown and Tom Lescinski. Galler-Rabinowitz began skating when she was two. “My mother skated and I just loved watching her,” said the talented dancer, who just turned 18 during Four Continents. “I started dance when I was nine.” Mitchell began when he was eight. “I was always stranded at the rink while my sister skated,” he remembered, “so I started lessons too.” He began dancing when he was ten.

The dancers train with Brown, Lescinski and Karen Cullinan at the Skating Club of Boston for four hours every morning before school, plus similar sessions on Saturday and several hours of off ice work every week. “I also do Pilates by myself at least three times a week,” Galler-Rabinowitz said. “I really love it.”

“Over the last six years, we’ve developed a great base,” she remarked. “We’ve had really solid skills training from Barret, Tom and Karen. All the pieces are together. We have a goal and now that the season is over, we’ll evaluate what we need to do to achieve it. We have a lot of support from our coaches, families, and friends who believe we have the ability to move up and be a real asset to U.S. ice dancing. One of our strengths is to not worry about the teams ahead of us, but to skate as well as we can and let they chips fall where they fall.”

Both skaters favor the new Code of Points judging system. “We definitely noticed the effects in dance,” she said. “You could see what each team is doing for every component. You come away from each competition with more information so you can look at each part and see where improvements need to be made. It’s very helpful for both skaters and coaches and for judges to evaluate each program. The only complaint is subjectivity, still noticeable in the second set of marks.”

They are definitely aiming for the 2006 Olympic Games. “It would be an honor to get there,” she said. “We’ve spent six years together so we have the longevity and the ability to handle pressure well. Our strong fundamentals will help us on the curve of improvement we need to make the Olympic team. The most resounding feedback we’ve received all season is that most of the other ice dancers are older and that now is the time age-wise.” “Skating is our love, so we plan to continue as long as possible,” Mitchell emphasized. “We’d love to go to the Olympics but if we don’t, it doesn’t mean we’re done. As long as we’re happy, we’ll continue. By now, we’re masters at juggling all parts of our lives and that keeps us more sane.”

Not only are they great skaters, but both dancers are also talented pianists who have won awards for their abilities. “I’m not competing as often now,” Galler-Rabinowitz explained, “because I would have to put in a lot more time. I play at least two hours every day, even at competitions. My mother said I would appreciate my piano lessons as I got older, and I do. I plan to pick it up again later. Playing in the Van Cliburn competition would be cool.” I haven’t had time to play since I started college,” Mitchell noted.

Galler-Rabinowitz has plenty of music to listen to at home when she’s not playing herself, as both of her younger twin sisters are pianists and composers. “There’s no way to listen to a CD or the radio over the din,” she explained, “especially when they’re each on one of the grand pianos. So I just sit and listen to them play. Not many people have that kind of in-house entertainment.” Mitchell likes to listen to jazz when he’s not skating.

Since they are both so musically inclined, both of the skaters are very involved with the selection and choreography of their programs. This season, they used Floodin’ Down in Texas and House is a Rockin’ by Stevie Ray Vaughn for the swing combo original dance and Bajofondo Tango Club for their free dance. “The tango is a very fiery and expressive dance,” Mitchell related. “We didn’t want to anything too traditional. It’s avante garde but still a tango. We were lucky enough to work with Hector Falcon, who’s an Argentine tango master and choreographer for several traveling Argentine tango companies when he was in Boston. He gave us a good basis before we started. We wanted to use the program as a vehicle to show our maturity and expression and our interaction with each other.”

Both skaters like to read a lot. “I’m reading Three Comedies by Aristophanes,” she noted, while he reads mainly historical fiction and biographies. She also writes poetry and short stories and does some painting. “I was doing a lot of seascapes with oils in one phase, but now I’m doing watercolors. It’s frustrating but I want to master it.” Mitchell is an avid golfer and sports fan, especially of the Boston teams.

The skaters are committed to helping others. They have performed for five years at Harvard University’s Evening with Champions to benefit the Jimmy Fund and the Dana Farber Cancer Institute, the Salvation Army’s Skatefest benefit, and the Skating Club of Boston’s Ice Chips show which benefits the Make-a-Wish Foundation.

“We’ll do a few shows in the spring, but we’re eager to get started on next season,” Galler-Rabinowitz stated. “We’ll get two months lead time since we’re not going to Worlds. We’re looking forward to learning the Golden Waltz from its inventor, Natalia Dubova, this summer. And we’ll be working with Marie Lawler, who’s an expert on the Charleston, the quick step and jive to prepare for next year’s original dance.”