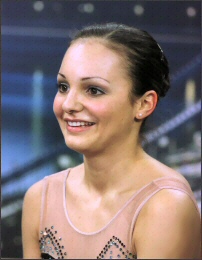 Sarah Meier showed that she was back after missing much of the 2003 season due to injuries.

Sarah Meier showed that she was back after missing much of 2003 with injuries. The three-time Swiss senior ladies champion finished tenth at the 2004 European Championships in Budapest, Hungary and 13th at the World Championships in Dortmund, Germany. Before suffering a string of injuries, Meier had finished as high as fifth at Europeans in 2001, third at Junior Worlds in 2000, and 12th at Worlds in 2001. She placed 19th at Worlds last season.

The 19-year-old does not have any particular goals for placements this season. “I’m just happy to be skating again,” she said. “I missed it in the summer. I just want to compete and show people that I am still here. I just hope to be able to train well and be able to show all my programs. I love skating because it has a little bit of everything. You can do many different things. It’s a good mix of athleticism and music, like dancing.”

Meier comes from a family of skaters. “I was first on the ice when I was two years old,” she said. “I started lessons when I was four. My mother and my aunt were figure skaters and my father was a hockey player so they were always at the ice rink. It was natural that I start to skate. My aunt is also my coach.”

She landed her first double Axel when she was ten and her first triple lutz a year later. “The triple lutz is my favorite jump,” she stated, “although it changes from day to day. I like the outside edge better for some reason. I landed the lutz before the loop or the flip. The most difficult triple-triple I have is the triple lutz-triple toe, but I’m only using triple lutz-double toe now because I was injured and could only practice for six weeks before the European Championships.”

The injury was the latest to plague Meier in her career. “I got new boots that caused tendonitis in my right foot. I could do anything except put my boot on and skate. I was off the ice from July through December. The other injury was to my left foot during the Olympic year. I twisted my left ankle and tore the ligaments. I missed almost three months so there was not much time to practice before the Olympics but it was all right there. I had no pain.”

The youngster finished 13th at the 2002 Olympic Games in Salt Lake City. “It was a wonderful experience,” she remembered. “The figure skating competition was not much different from the World Championships, but it was interesting meeting all the athletes from the other sports and being with the Swiss team. I didn’t arrive for the opening ceremony, but I marched in the closing ceremony. It was a lot of fun. I’m not sure how much longer I will compete but it won’t be longer than the 2010 Olympics.”

After she finishes, Meier plans to continue a career in the sports field, probably as a teacher. “I only go to school on Friday and Saturday now, but I have schoolwork at home the other days. My favorite subject is English. I also like biology and chemistry. I will finish my school this summer and then start in the university in the sports program,” she said. “I enjoy all kinds of sports, like soccer, tennis, swimming and snowboarding. I go cycling and jogging and rollerblades in the summer for endurance training.”

During the summer, Meier has to train at different locations because the rink in her hometown only has a roof and isn’t enclosed so there is no ice in the summer. She trains in Oberstdorf in Germany and in Flims in Switzerland when there is no ice in her town of Bulach. Meier tries to work on ice for two hours a day, five or six days a week. She does an hour or two of off ice training every day, less right before competitions, and more in the summer. “I do a lot of weight training and jumps off ice,” she said. “Sometimes I do Pilates.”

Eva Fehr, Meier’s aunt, has always been her coach. Mark Pepperday also assists in her training. Meier has used several different choreographers, but always picks her own music. “I have an idea of what I want to skate to,” Meier explained. “I listen to a lot of CDs and choose what I want, then I take it to my mother and my aunt. If they think it’s OK, then we keep it. Otherwise, I look for something different.”

Salome Brunner and Tatiana Druchinina choreograph Meier’s programs. “Salome does the structure of the program, then Tatiana helps me with my facial expressions, arm positions, and overall expression on the ice.” This season, Meier is skating to Pure Mood, No Woman, No Cry, and Would You be Loved by Bob Marley, performed by Mouthy Alexander for the short program and music from the Evita soundtrack by Andrew Lloyd Weber for the long. “I don’t like very classical things,” Meier remarked. “I like to have unusual music that other skaters don’t use because I hate hearing the same music over and over. I also try to change both programs each year because it’s more interesting, but this year I had to keep my short program because I didn’t have time.”

“I’ve always loved Evita,” she noted. “I used Don’t Cry for Me Argentina about five years ago. I wanted to do it again for the free program. For the short, I wanted something slower, so I chose Big Love Adagio by Bond but with no time to finish the choreography, I went back to last year’s program. My choreographer suggested that I do something in jazz or blues. My mom brought me the CD and told me it had something that would be good for me.” Off ice, Meier likes hip hop, R and B, and rock, especially the Red Hot Chili Peppers. She used to play the flute when she was in primary school.

Off ice, Meier enjoys going out with friends, going to the lake in her hometown, dancing and going to the cinema. “I like most films,” she said. “I’m not very critical when it comes to the cinema. I liked Lord of the Rings and I enjoy watching comedies and movies where I don’t have to think too much.” She also surfs the Internet and has a website at www.sarahmeier.ch, which her cousin is redesigning so she can make more changes herself to keep it updated. “I also have very many stuffed animals,” she said. “I keep them all in my room. I also have a brown and black cat with a short tail. I call her Bunny because she looks like a rabbit.”

Meier usually goes on holiday in the summer with her family’ last year to Marco Island and Naples in Florida and the previous year to Dubai. Her trip to Vancouver for Worlds was one of her favorites as she enjoyed the shopping and the sightseeing as well as cycling in the large park by the sea. She wants to go to London and Australia.