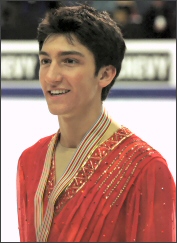 Evan Lysacek did not feel well enough to compete in the Marshall's Figure Skating Challenge in early April, finishing fifth in a strong field.

Disappointment has dogged promising American skater Evan Lysacek at the World Junior Figure Skating Championships. Three times he’s skated well enough to win and three times he’s been second. “My big goal since 2001 was to win Junior Worlds, but it wasn’t meant to be,” he said. To make matters worse at his last Junior Worlds in The Hague this March, Lysacek wasn’t able to warm up properly in practice for the exhibition and tore a groin muscle, reducing his training time. He did not feel well enough to compete in the Marshall’s Figure Skating Challenge in early April, finishing fifth in a strong field.

Lysacek has been moving up steadily. He won the novice and junior men’s titles at U.S. Nationals back to back in 1999 and 2000, the first time in 50 years that the feat had been accomplished. Then he won two silver medals in the Junior Grand Prix series in the fall of 2000, qualifying for the JGP Final, where he finished eighth. As a substitute for Ryan Bradley, he took a silver at the 2001 World Junior Figure Skating Championships and was poised for a strong season in the fall. But the junior season was cancelled after September 11 and he finished only 12th in seniors at the 2002 Nationals and was left off the 2002 Junior World Team. That wasn’t his only problem. “I sprained my ankle and it took a couple of months to heal,” he added. “Then I had three broken ribs and compensating for that caused a back injury.”

“I also felt I had lost track of my goals after Nationals,” he stated. “I took skating for granted and wasn’t working hard enough to move to the next level.” That led him to take some motivational seminars to change his outlook. “I wrote my own mission and adopted one of their premises – if you don’t change something every ten minutes, you won’t meet your goals in a year.” That led him to change his lifestyle, emphasizing skating over everything else, improving his diet, getting more sleep, and partying less. He even has a screen name to remind him of his purpose.

The approach has worked well. For the last two years, Lysacek has done well at both junior and senior events. In 2002-2003, he won the Triglav Trophy in seniors and finished second at the Junior Grand Prix events in Courchevel and Montreal before finishing fifth at the JGP Final. He was seventh at the U. S. Nationals in senior men and tenth at Four Continents. “My goals were to finish in the top ten at Nationals, qualify for the Junior Grand Prix Final and improve my placement there, win Sectionals for the first time, have a triple Axel, and qualify for Junior Worlds, all of which I accomplished,” he said.

Last season, he won the Junior Grand Prix Final, the SBC Cup in Japan and the Croatia Cup in Zagreb. He took a bronze medal at the Four Continents Championships, and finished fifth at U. S. Nationals. And that was after having surgery on his foot during the summer.

“I kept going from senior to junior to senior all year,” he said. “So I was used to going back and forth between the junior and senior programs. I was always training both, so it was no big deal. I did a full run-through of my junior and senior short every day since the required elements are different. Then I did a run-through of my long program. I actually skated my junior short program at Nationals instead of my senior program, although I used my senior short at Four Continents.”

The 18-year-old currently trains in California with Frank Carroll and Ken Congemi, with whom he has worked since June 2003. He usually skates for an average of three hours a day, six days a week and does about 5-6 hours of off ice training each week. For the previous two years, Lysacek had worked with coaches Viktor Kudriatsev and Maria Jezak-Athey in Chicago. “I think Russian skaters have more artistry and better technique, while American skaters have more stamina and consistency,” he said. “I felt that a blend of the two methods would work for me so I went to the best Russian technician. But last season, Viktor had to stay in Russia. He said I could come but I wanted to stay in the U.S. He recommended that I work with Frank.” In past summers, Lysacek has often worked with Kudriatsev as he conducted clinics in other countries, including Russia, Germany, Switzerland and the Czech Republic.

Lysacek started skating when he was eight. “My grandmother aspired to be in the Ice Capades,” he said. “She bought us skates for Christmas, and my mother signed my older sister and me up for group lessons. After that, I learned fast. I was ten when I won Juvenile Nationals, then I won novice at Nationals at 13 and juniors at 14. I had two triples when I won novice, the salchow and the toe loop.”

His favorite jump is the triple lutz. “It took a while to get it, but that’s the one jump I got on my own. It’s one of my most consistent jumps. I got my triple Axel the day before I went to Four Continents the first time, so I put it in my programs there. I fell in the short and two-footed it in the long. My first clean one in competition was in the qualifying round at the World Juniors in 2003. That boosted my confidence. I had done three big competitions in a row and was physically and mentally tired. Then to land another clean one in the free skate under pressure was a huge boost.”

Lysacek upgraded his programs even more last season. “Frank has been changing a lot of my technique and I changed my short program a lot,” he said. “I added a triple Axel/triple toe combination to the short and I’ve been working on the quad salchow and the quad toe loop. I was actually landing the quad toe a lot before Christmas. But I’m still having some trouble with the height on my triple Axel.”

He usually changes only one of his programs each year. “I’ve skated to a variety of music,” he continued. “All of them are difficult at the beginning, but I’ve been comfortable with most styles.” He used Espana Cani for the short program last season, the same as in 2002-2003. “I wanted something fast and exciting for the short,” Lysacek explained. “The music is classical, but exciting. A lot of people have used it before, but I did a new interpretation. It was a good match between the music and the choreography and between the choreography and me. It made me a lot more confident.”

His free skate was new for 2003-2004. For the previous season, he had used music from the Drop Zone soundtrack for the free. “Oleg Epstein found the long program music for me. He thought it suited my style. It was a challenge but the music was really comfortable for me. It’s kind of unusual music that sparked some interest in the audience. The judges didn’t like it, so I picked Rachmaninov’s Piano Concerto No. 2 for this season.” Lysacek also has three exhibition programs which he uses depending on his mood. They include Time to Say Goodbye, Sting’s Desert Rose, and Enrique Iglesias’ Hero. Epstein choreographs all his programs.

To relax, Lysacek listens to music, hangs out with non-skating friends, and goes to the mall and to the movies. He enjoys suspenseful movies and alternative and rock music. He’s also learning to play golf, a sport that his older sister also plays. He collects model cars and gives most of his stuffed animals to friends and charities, although he keeps some special ones at home.

Of all the places that he has traveled, Courchevel in France ranks as one of Lysacek’s favorites. “That was really nice,” he said. “I did the Junior Grand Prix and then was invited back by the French Federation for a Christmas exhibition. I love France and even took French in high school.” Lysacek always wanted to visit Asia, so he was happy to be invited to Four Continents in China. “Beijing was a new kind of experience,” he said. “I also enjoyed Montreal. We did a lot of sightseeing there. And the people in Malmo were great.”

For next season, Lysacek hopes to do some senior Grand Prixs. “I just want to go out and improve on my best,” he said. “I don’t have any expectations on placements. I want to have strong showings and make a good first impression.” Lysacek hopes to compete at the Olympics in 2006 and medal in 2010. Then he would like to skate professionally.

He doesn’t plan to coach. “I want to go to the Harvard Business School and study international business, he said. “I’ve been to the Jimmy Fund show several times and really like the atmosphere at Harvard.” Lysacek has graduated from Neuqua Valley High School, where he was taking advanced placement classes, but took off last year because his move to California left him no time to apply to California colleges. He plans to start courses in the fall.