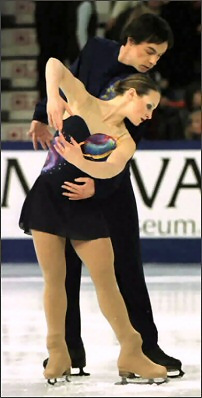 Canadian pairs skaters Pascale Bergeron and Rob Davison have been together less than three years.

Canadian pairs skaters Pascale Bergeron and Rob Davison have been together less than three years, but in the 2003-2004 season, they medalled at both their internationals, taking the silver at the Finlandia Trophy and the Nebelhorn Trophy. They have finished in the top seven at the highly competitive pairs competition at Canadian Nationals every year, including a sixth place in 2004. Next season, they are hoping for some Grand Prix assignments, but have no timetable for their careers.

“We’re just planning year by year,” Bergeron said. “It’s harder to decide when there’s two people involved. Sometime we’ll decide that we did it, now it’s time to try something else.” “We’re not just skaters,” Davison emphasized. “We both aspire to other things. It’s good that we have other ambitions.”

Davison currently works 35 hours a week in a skate shop, but doesn’t plan a post-competition skating career. “I have no plans to coach,” he said. “I have a bachelor’s in political science and plan to get my law degree. It runs in the family. My dad and my uncle are both lawyers.” Bergeron is almost finished with CEGEP and plans to go to university to be a primary school teacher. “I’m taking some correspondence courses now so I’m getting good results because I’m not as tired,” she said. “I used to work and am looking for a job now. We don’t get any help except from mom and dad.”

Bergeron began skating when she was three. “My older sister used to skate and I had to go to the rink anyway, so my mom gave me skates too,” She said. “I skated freestyle until three years ago when I was 19th in senior ladies, but I always had an interest in pairs. I did my first double Axel when I was 12 and my first triple loop when I was 13. I like to watch dance and I had two dance tests, but I never wanted to be a dancer. I was 19 when I first tried pairs because Rob needed a partner. His coach called me and asked me if I want to try it.”

Davison didn’t start skating until he was nine. “My sister had an old pair of white skates and my mom wanted me to try it,” he recalled. “I didn’t like playing hockey that much as a kid. My mom wasn’t sure if I’d like skating. I was always falling because of the toe picks. So she just dyed the old boots black. It wasn’t until my third pair that she bought me new black boots.” Davison skated in singles, making Divisionals in novice men and passing his junior tests, but switched to pairs at 17 partly because he couldn’t do a triple Axel.

“The first time I tried pairs at camp, all of a sudden I had a flash of things I hadn’t tried,” he noted. “I took it on as a challenge. I like the fact that you have someone to spend your day with. I don’t understand how singles skaters do it. It makes so much difference how you spend your day.” Davison made it to Nationals in junior pairs with Keridawn Thomson, but she was injured before they could make it to seniors and retired from the sport.

“I was away from it for four months or 20 more pounds,” Davison stated wryly. “Pascale and I started after Worlds in Vancouver. My coach was doing his finagling for a partner, but we kept it secret until she passed her senior tests.” “We have been really lucky because we have such a good relationship,” Bergeron stated. “Everyone cares for one another. We have great communication and never get mad at one another.”

The skaters train for three hours a day, five days a week at the St. Leonard Club with Manon Perron and Richard Gauthier. Bergeron also does Pilates exercises at home. “We have also trained with an acrobatic instructor from Cirque du Soleil for the last year,” Davison noted. “We’ve learned lots of things that are relevant to skating, but we haven’t been able to incorporate as many moves into our programs as we’d like. It depends on my mood what kinds of moves I like best. Sometimes it’s spins; sometimes it’s lifts.” “I need the big tricks,” Bergeron stated. “Throws are my favorites.”

Julie Brault choreographed the couple’s programs. “It’s always the worst job to try and find skating music,” Davison said. “It drives me insane. It’s hard to differentiate between an emotional response and a physical response. If I had a choice, it would be to use something completely unconventional, but that’s not good for results. You have to use something conventional. We try to find music, but Richard has the final say. For the long, I brought in a CD to show him a piece, but when I played it, he picked a different one. I found a couple of different arrangements before we found the ones that we used.”

For the 2003-2004 season, they used Sabrina’s Theme for the short and two pieces from Gustav Holst’s The Planets for the long – Jupiter and Venus. “I hate classical music,” said Bergeron. “I can’t stand it any more. But this year’s long program was fun to skate because there’s a story behind it. I like to play a character and not just go skate, skate, skate, jump.” “The short is from last season, and after this season, it’s gone,” Davison said. “If I hear one more violin, I’ll crack. I think we’ll have a big bonfire and burn the CD.”

Off ice, Davison said, “I’m a real music buff. I have three turntables and 500 or 600 albums. I listen to different things depending on the day. Sometimes ABBA, sometimes electronic music or trance or 80s dance music.” He also likes to spend time on his computer, doing things related to his car. “I try to be a car buff,” he said, “but my car is 13 years old.”

Bergeron likes to watch television, especially the Learning Channel. “I love Trading Spaces,” she said. “I’ve watched every show twice. I also watch lots of movies to relax. I really liked Lord of the Rings. I also collect frogs. I have 200 or more frog things. Somebody even tossed me a big mat with a frog on it. I always bring one as a good luck charm. My dad gave me a talking frog when I was in juvenile and it’s continued every since. But my boyfriend’s getting a bit tired of them being everywhere in my apartment.” This year, the couple also got showered with 70 toy turtles that Davison’s mom and aunt decorated for friends and family to throw on the ice. “Last year, it was ducks,” he said. “There’s no special symbolism, just what ever they can find.”