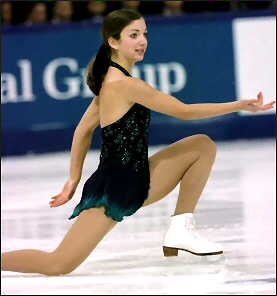 Alberta's Monica Boucher has been moving up steadily at Canadians, hoping to reach her goal of making it to the top in figure skating.

Alberta’s Monica Boucher has been moving up steadily at Canadians, hoping to reach her goal of making it to the top. She has progressed from third in novice ladies in 2001 to eighth in juniors in 2002, fourth in juniors in 2003, and finally 12th in seniors in 2004. “I was hoping to be around where I was for my first year in seniors,” Boucher said. “I had a really good short, but the long was both good and bad. I had never skated in front of that many people but there were a lot of friends here from my club.” “Monica was really nervous in the qualifying round,” said coach Ravi Walia, “but she really fought back during the week to finish strongly.” Only 17, Boucher is one of a number of young Canadian ladies hoping to make it to the Olympics. “I plan to keep going as long as I enjoy it and see how far I can go,” she said.

Boucher began skating when she was five. “My parents put me into it,” she said. I kept going because I was doing well. I tried soccer for a couple of years when I was eight or so but I liked skating more.” She landed her first clean triple salchow when she was 12 and now uses all five triples in her programs. “I’m a jumper,” she said. “My favorite jump is the triple toe loop and I’m working on a triple toe/triple toe combination. I’m landing triple lutzes now but it’s hard work to keep all my jumps consistent. One of my goals is to have a consistent triple lutz for next season.” Walia noted, “Monica is a great jumper. She has excellent technique but she has struggled recently with the consistency of the more difficult triples.”

Boucher has worked with Terri Gallant since she was ten and with Walia for the last four years. She skates at the Sherwood Park Figure Skating Club for two hours every day except Sunday and does Pilates, ballet, and yoga as part of her off-ice training. In the spring, she works out with the track and field team to improve her conditioning. She does a complete run-through of both her short and her long program each day. “Monica’s one of the hardest workers I’ve ever seen in skating,” Walia stated. “We have been working a lot on her presentation and trying to bring out more of her personality on the ice.” “It’s fun to be at the club,” Boucher said. “I like working on something really hard and then doing it. It makes you feel good.”

For the 2003-04 season, Boucher used Rushing Wings of Dawn in her short program and music from West Side Story in her long. “We heard the music for the short at a competition in Italy and Terri found the CD for it,” Boucher said. “And I liked the music in West Side Story.” The short program was choreographed by Terri Gallant and the long program by Lance Vipond. Boucher usually changes one of her programs each season. “We kept last year’s short program,” she said, “so next year we’ll keep the long. I like to skate to inspirational music, but not to major dramatic music right now.”

Off ice, she listens to lots of different kinds of music. She likes to go out with friends, watch movies except horror films, and read. “I read a lot of stuff,” she said, “mostly fiction.” She also collects stuffed animals. Boucher said she likes to travel. “I like to go see things on holidays,” she said. “I’d like to go all over the world. My favorite trip was to Italy because I got to go twice so I knew my way around. They had really good food there.”

Boucher attends public school where she is a grade 11 honor student. “The next semester will be harder,” she said. “I’ll have to take some courses by correspondence. I’m good at sciences and plan to go to university but I’m not sure in what yet. Maybe I’ll be a physiotherapist.” Boucher is also good at languages, being fluent in French as well as English.