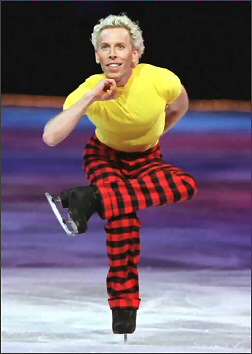 Craig Heath, 36, has not allowed his blades to dull or rust since his last professional figure skating competition at the 2001 American Open Professional Championships.

Craig Heath, 36, has not allowed his blades to dull or rust since his last professional competition at the 2001 American Open Professional Championships, where he won the bronze. “If anything, things have sped up,” said the 1998 World Professional Bronze Medalist, who’s been performing all over the world for the past 10 years.

Heath, who began skating at 9, won his first medal (a bronze) at the 1987 US Junior National Championships. “Skating was the first thing that I found that I absolutely loved,” said Heath. “Although I liked taking piano and guitar lessons and roller skating, ice skating was by far my favorite.”

For the next eight years of his amateur career, Heath competed on both the national and international level, gaining notoriety for his unique spins. “Three years after I began skating, an instructor noticed me spinning and encouraged me to do more, while showing me different techniques,” said Heath. Practice paid off and Heath improved his spinning techniques dramatically, and as a result, they became the highlight of his programs.

Like most other skaters, Heath wanted to go to the Olympics and Worlds, but that looked unrealistic for him. “I worked to be the best I could with the talent that I had,” said Heath, who worked with Frank Carroll and Wendy Olson. “I really think that I did the best I could and had the best amateur career possible for me. I look back with pride. I do not regret anything.”

Heath’s parents were always supportive of his skating. “They still are,” he said, adding that he was lucky to have parents who could both afford and appreciate his love for the sport.

After placing fourth at the 1993 World University Games in Poland, Heath decided to turn pro. “I went to the 1993 US Nationals in Phoenix,” recalled Heath, “but in my heart I knew that it was time to move on.” Though Heath loved the sport of figure skating, he felt that he needed to find a different outlet in order to do it. “Cindy Stuart was at my rink and I had worked with her a bit, so she really helped me get into show business,” he recalled, adding that he still uses the same work ethic now as he did when he was an eligible skater. “I LOVED it and never looked back. I have really had a great career in both disciplines (amateur/pro). I feel so fortunate.”

Although Heath has pro experience under his belt, he still takes occasional lessons. “Brian Wright did many numbers for me,” said Heath. “I still have one that he choreographed that I have not performed yet. I am saving it for the right time.” Heath has also worked with with Toller Cranston,  Jamie Isley, Cindy Stuart, Robin Cousins, Richard Swenning, and Jeri Campbell, just to name a few.

Heath, who has been the president of the Professional Figure Skaters Cooperative (PFSC) for the past four years, now spends what available time he has teaching in the summer. “I just worked with the Danish men’s champion, Michael Tyllesen,” said Heath, who works with many other talented kids in Sun Valley, Idaho and is known as the ‘spin’ coach.

“I love to spin,” Heath emphasized. “I feel like I am flying while I am spinning. I like working on new spins, practicing old ones and just rotating as fast as I can! So I love helping other people to perfect their spins and I love to see them get excited when they get better.”

Heath likes to skate to music that is catchy, inspiring and happy. “Two of my favorite artists are Elton John and Madonna,” he said, adding that the double Axel is his favorite jump. “Sometimes I did 10 double Axels in a row for many shows of Disney on Ice’s Toy Story.”

As with his preference for music, Heath also enjoys movies that make him feel good and have inspiration. “I don’t have much time to watch many movies,” he maintained, adding that he is currently reading Toller Cranston’s Ice Cream.

Like many other skaters, Heath has learned how to improvise when necessary and to ‘go with the flow’. “I feel that Brian Boitano is one that has changed professional skating forever,” Heath said, adding that he admired his work ethic. “I also admire Dorothy Hamil. She is still incredible and beautiful. She is such an inspiration. And the Chinese pair champs. Incredible! Michelle Kwan. She shows her heart every time she skates!”

When not promoting professional skating, which takes a lot of time and energy, Heath likes going to Starbucks, doing Pilates, Yoga, biking, reading, hiking, writing articles, driving, going to the beach, and visiting with friends. While he doesn’t have time for other sports, the health conscious vegetarian likes to collect properties.

“I love looking for and buying real estate,” revealed Heath, who currently owns property in Waikiki, Hawaii, Mill Valley, Calif., and Sun Valley, Idaho. “It is my dream to own a hotel (or many hotels) in the future. I feel that since I stay in them enough (about 330 days a year) that I know what people would like and what makes them the happiest.”

Heath, who has been traveling for the past 10 years, likes to go to Hawaii when on vacation. “I have been away from home for approximately 330 days a year!” he exclaimed. “I just went to Hawaii to buy property and that was the first real vacation that I have taken for myself.”

Now that vacation time is over, Heath is currently training in order to prepare for shows in Sun Valley this summer, as well as a competition. “I still like to do pro competitions,” said Heath. “That is why I accepted the offer to compete in the 2004 Major League Figure Skating Championships (MLFS) in Lakeland, Florida in June.” After the MLFS competition, Heath will be getting ready to tour with Holiday on Ice for the Hollywood production in Europe next season.

“I absolutely have loved my time touring with Holiday on Ice,” commented Heath. “I am now going on my third tour with them.” Being an American, Heath was skeptical at first of touring in Europe. “But I really ended up with a great group of people and a wonderful show to perform in.” Robin Cousins and Cindy Stuart choreographed it, while Anthony Van Laast (Mama Mia and Bombay Dreams choreographer) directed it. Heath continued, “The house is almost always sold out and the audience members rave about show. I have to say, skating in this show is a dream come true for me in many ways. I have great costumes, excellent music and I get to bow front center! How’s that for a life?”

On occasion, Heath is also asked to perform on one of the five Royal Caribbean Cruise ships that have an ice rink on it. “Sylvia Froescher, the Production manager for Willy Bietak Productions, based in Santa Monica, Calf., needs me to help out sometimes when I am not on tour,” said Heath. “It can really be a fun job to skate on those ships.” The shows are of the highest quality and are the pride of the fleet. “The audiences go wild and often come back to see more than just one show,” he added. “Living at sea is not so bad either. Visiting all those beautiful Caribbean Islands and just being in the tropical weather all the time can really spoil a person! When I do go work on the ship, I treat it like a vacation and relax as much as I can.” Heath also goes to the gym almost everyday when at sea. “They have the most beautiful spa/gyms that I have ever seen…and with the best view!”

After touring with Holiday on Ice, Heath gets to live, perform and teach in Sun Valley, Idaho for three months every summer. “It doesn’t really get much better than that!” Heath stated. “Sun Valley is the most beautiful place that I have ever skated. We do the show on the outdoor rink every Saturday night. It is extraordinary to skate in such a beautiful setting. And to perform at that!”

Of competing and touring, Heath said that this is the first competition in many years that he would not be attending right from a tour. “It is always difficult to train while on tour,” Heath explained. “The tour is hard enough without adding all of the other work to get ready to compete. It is these challenges that keep me going, though. I love to see what the human body can actually do under such extreme circumstances.”

As for touring, Heath recalls a humorous moment when he was performing in Moscow. “The producer asked me to do an extra number in the show on opening night,” explained Heath. “He said it was really easy and short and to just put ‘the costume on and go make something up’. I said ‘OK’. So I get in this costume with a big cape and a mask that I couldn’t see out of. I had never heard the music but the producer pushed me out on the ice on cue. The music turned out to be about four minutes long! The cape was too big so I kept tripping over it and falling.” He continued, “The mask went down over my eyes so I could not see. Then, I had to help this magician by pulling a rope that was dangling over a carpet. I skated over to the carpet and ran tiptoe across (I was supposed to be scary) and pulled the rope, but it did not work properly. When I got off the ice, the producer and his wife were laughing so hard that they were crying. They still talk about that and wish that they had it on video!”

Additional info pertaining to Heath’s tour schedule can be found at www.craigheath.com.” This site was was created to keep my summer students involved with where I was (since I travel all the time) and with what I am doing,” said Heath. “I wanted them to feel like they could contact me for any reason while I was away. It has been a blast hearing about what new jumps they are doing, what competitions they have won, etc.” Heath’s site also has a Travel Log that he keeps updated with fun photos and stories of his travels. “I probably have more fun doing this than the people reading it!” he laughed.

In addition to the stories he writes and shares, Heath also has a biweekly column in the worldwide entertainment paper Callback Newspaper called Sk8 Talk. “I interview skaters, write fun articles about life ‘on the road’, and do an occasional book review (about a skating-related book of course),” said Heath. “I have a new interview with Brian Boitano that was just put up a week ago. There are also interviews with Peggy Fleming, Kristi Yamaguchi, Anita Hartshorn and Frank Sweiding, Gia Guddat, just to name a few.”

When asked what he felt was the key to success, he replied, “TAKE ACTION! Yes, it takes hard work, initiative, positive thoughts, and belief in yourself, but taking action is the key. I have learned this on many occasions. I see so many people who want to achieve their goals but who don’t do what is required in order to succeed. We all have to ‘make it happen’ by taking action and then giving 100%.”