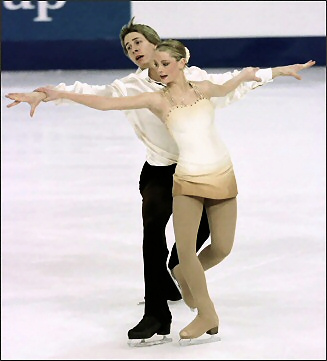 Michelle Cronin and Brian Shales, the 2003 Canadian novice figure skating pair champions, made a successful debut in junior pairs this past season.

Michelle Cronin and Brian Shales, the 2003 Canadian novice pair champions, made a successful debut in junior pairs this past season. They placed third at the 2004 Canadian Nationals, second at the 2003 SBC Cup, third at the 2003 Mexico Cup, and second at the 2003 Triglav Trophy. They had hoped to make it to Junior Worlds this season but missed by one spot. The skaters want to continue as long as they are among the top skaters in their discipline. Their long term goal is to compete at the 2010 Olympics.

Shales began skating when he was six. “I had been a hockey player for a year before that and I wanted to improve my hockey skills,” he said. “I’ve been playing center in AA and AAA for most of my life and I’m still playing in a rec league just for fun. I skated in singles for four years before I tried pairs. There’s more to do in pairs – a lot more elements and interaction between partners. There’s someone to be with rather than just being on your own.”

Cronin started when she was four. “My sister was in figure skating so my parents put me in it,” she remembered. “I enjoyed it a lot. I started pairs when I was eight. I like the variety. It’s not just jump, jump, jump. You get to share the experience with someone who has the same dream as you do.” She was also a competitive swimmer in her younger days. Both of the skaters like the throws best. Shales also likes death spirals, while Cronin prefers lifts.

The skaters have been together for five years. “My mom called her mom to set up the tryout,” Shales noted. “We have so much in common that we get along like brother and sister. Michelle has a lot of good qualities.” “We match each other very well,” Cronin agreed. “We have the same lines on the ice. The same style and the same personalities.”

The skaters train at the Toronto Cricket Skating and Curling Club with Kris, Kristy and Paul Wirtz. They skate for about 3-4 hours a day, six days a week, plus an hour or two of off ice work. They also play handball with other skaters at the rink. Steven Belanger is their choreographer. “Steven chooses all our music,” Shales said. “We like good all around music that we can use to bring the crowd into our performance. We like to skate to a variety of music as long as it has good qualities and brings out our highlights.” Cronin added, “I really liked our short program music from last year so we kept it, but the long program was new.” They used Jumping Jack for the short and Les Miserables for the long in 2003-04. Off ice, they both listen to everything from hip hop to dance and rock. Cronin said she also learned how to play the piano when she was younger, but Shales doesn’t play any instruments.

Off ice, Shales likes to listen to music, play video games and shop. He also likes to play football, baseball, and soccer for fun. She likes to shop, listen to music, roller blade and hang out with her friends. All they collect is the items people throw to them on the ice. Cronin cited Japan as the most interesting place that she had visited. “It was a beautiful country and the culture was very unique and interesting,” she said. She would like to visit France, especially Paris, while Shales wants to go to Italy.

One of the reasons that Cronin would like to visit Paris is because of the fashion. She hopes to be a fashion designer and has created some of her practice outfits. She’s an honor roll student in grade 11, where her favorite subject is English. Shales is just finishing high school through some on-line courses. “I liked social sciences and drama,” he said. “I was in a couple of plays in school. But I haven’t decided on a career yet. Maybe I’ll coach.”