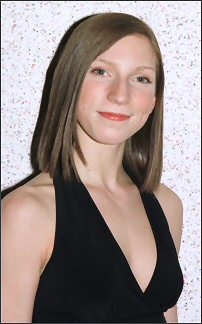 Mexico's most promising figure skater is Michele Cantu who won the senior ladies title this season after winning the junior title in 2003 and the novice gold in 2002.

Mexico’s most promising skater is Michele Cantu, just 16, who won the senior ladies title this season after winning the junior title in 2003 and the novice gold in 2002. Cantu follows in the footsteps of her sister, Ana-Cecilia, who was the Mexican senior ladies winner in 2003. “My sister helps me a lot,” Cantu said. “It’s good to train with her.”

Cantu charmed audiences this year with her musicality and skating skills, showing an artistic ability well beyond that of many more experienced skaters even if her jumps weren’t always consistent. She gained a lot of international experience by placing 15th at the Four Continents Championships and 26th at the World Championships. “Next season, I want to win a medal in the Junior Grand Prix Series,” Cantu continued. “I wasn’t ready this year as I only had all my triples since the summer. I wasn’t comfortable with them yet. I need to qualify for the Olympics in Moscow and I want to go to a senior Grand Prix event. No one from Mexico has ever skated in one.”

Cantu began skating when she was three. “My family was building a house near the country club in Monterey,” she said. “So my parents joined the club. They had an ice rink there so my sister and I started skating. It was only a small rink, about 15 by 30 meters, so when we started competing, we had to go somewhere else to train. For the last nine summers, I have trained in Connecticut. Last year, I moved to Simsbury to train there all year. But the first year was very hard. I boarded at Ethel Walker Girls School, but the school had required events that interfered with my training and I had to take a taxi every day in the afternoon to go to the rink.”

For her sophomore year this season, Cantu switched to Northwest Catholic High School, which is more flexible with regard to her training schedule. Now she skates every weekday for an hour before school every weekday and two and a half hours in the afternoons after classes, plus another hour and a half on Saturdays. She works with Galina Zmievskaya every morning in Simsbury and three days a week in Newington, CT. The other two weekday afternoons she works with Vladimir Petrenko in Simsbury. She also goes to the gym every day and has an hour-long ballet class two days a week and off ice jumping and strength training for an hour on two other days.

“When I was little, I played with jumps a lot,” she said. “I don’t remember which triple I learned first. I had up to triple loop for two years before last summer, and then I landed the triple flip and the triple lutz the week of my birthday. It was my present to myself. I’ve learned the triple loop-triple loop but I don’t have it in my program yet. I’ve also tried triple toe with almost everything. I need a triple-triple in my program next year so I will work on it during the summer.”

“I like competing but sometimes I get really nervous,” she added. “I like the practices right before the competitions. There are lots of people watching but I don’t get nervous about the competition. I really like meeting all the people from all the different countries at the events. And I like to see the different places. I really liked Slovenia. We stayed at a cool hotel in a ski resort and it was snowing. Everything was all white. I never saw snow before the first year I lived in Connecticut.”

Cantu loves sports. She used to play center for her school’s basketball team and still plays for fun. She also used to compete in cross country running for her school while she was still in Mexico. For fun, she also goes to the mall a lot, watches movies, and goes disco dancing. She collects watches and the toys she receives from fans. She also enjoys listening to popular music. “Slow music like the Goo Goo Dolls,” she said, “not hard rock.”

“I usually skate to fast music,” she said. “And I usually change both of my programs each year. Next year, I will probably keep the short and have a new long, but I like making up the short program. It’s easier to fit in all the elements you have to do.” For the 2003-2004 season, Doris Beckley found the music for the short program, which was choreographed by Maia Usova. Doris’ husband, Edgar Beckley, found the music and choreographed the long program. Cantu’s short was to selections from the Broadway musical 42nd Street while the long was to Don Quixote by Leon Minkus.