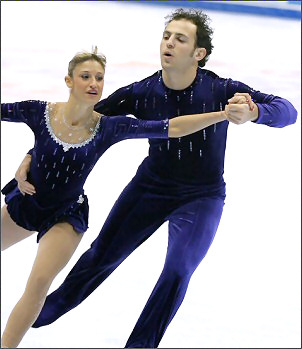 Tiffany Ann Sfikas and Jeffrey Weiss had hoped to finish in the top six in senior pairs at the 2004 U.S. National Figure Skating Championships in their first season together.

Tiffany Ann Sfikas and Jeffrey Weiss had hoped to finish in the top six in senior pairs at the 2004 U. S. Nationals in their first season together, but only placed 14th. Seeking additional training time, the couple decided to move from Calif. to Oldsmar, Fla. after last season. “Tiff and I decided to move to Florida in March, when we were offered more ice time at the Tampa Bay Skating Academy,” Weiss said. “We moved in April, and are currently training under Pauline Gasparini, Lyndon Johnston, Jim Millns and Petr Barna, who handles our jumps. We are very excited about the opportunities that have been presented to us at this venue.” Last season, they trained in San Jose, Calif. with Tracy Prussack and Kevin Peaks.

“We train about three hours on the ice,” Weiss continued, “and have an off-ice regimen of 2 to 3 hours, which includes lift training, Pilates, strength training, plyometrics, and cardiovascular endurance training. We have both received our certifications in Pilates. Later this year, I hope to convince Tiffany to join me in studying Capoiera, a Brazillian martial art that is disguised in the form of a dance. Also, we extensively use Rollerblade products in our off-ice training, as they are now our official off-ice equipment sponsor.”

“I have always been active in weightlifting and exercise physiology,” Weiss stated. “I have followed many tenets and workout programs, involving much time sweating in a gym, pool, track, or ballet studio. Recently, I have fully turned to the Pilates method to continue my strength training, as it seems that only this method will eliminate the severe bulking up that many male pair skaters go through, all the while preserving the quick reflexes lost when muscle mass is packed on. This, coupled with my martial arts, has proven to be indispensable in improving my balance and coordination.”

Weiss has always been fascinated by the martial arts and began training at the West Coast Martial Arts School in Willow Glen, California when he was 23. He studied a mixed martial arts system developed by Master Ernie Reyes, Sr., one of the pioneers of the modern martial arts school of thought. According to Weiss this system combines the best of Tae Kwon Do, Muay Thai boxing, Western Boxing, Escrima, Kung Fu, Ju-Jitsu, and grappling to create a separate, and highly efficient art form. Weiss is a first degree black belt in Tae Kwon Do.

Weiss began skating when he was four when his parents took him and his sister, Julie to the rink. “I displayed an early propensity towards pair skating, as my first partner, Melissa, and I, teaming up at the ripe age of seven, earned many medals skating to “Zippity-do-Dah,” he remembered, but she outgrew him. Later Weiss teamed with Erin Elbe, taking the silver medal in junior pairs in 1995 at U.S. Nationals and placing 12th and ninth at the 1995 and 1996 Junior Worlds.

After Elbe retired, Weiss moved to the University of Delaware to train with Ron Ludington. “After studying under he and his wife Karen and the staff at the University of Delaware for nearly two years, I found myself to have developed a much broader sense of what it means to be a pair skater, and what it takes to become a champion,” Weiss said. But his partnership with Christie Moxley ended and he returned to California, leaving the sport for a year to attend De Anza College in San Jose. Moxley later switched to ice dancing and competed in senior dance with Alexander Kirsanov.

“While the pursuit of academic goals holds a very strong place in my life, nothing supercedes my desire to be a champion figure skater,” Weiss emphasized. “This inner drive has been with me for as long as I can remember and it was during this time away from the ice that I began to see and appreciate this motivation for what it truly is. So, with a new outlook on my reasons for skating, I decided to accept an invitation to the USFSA Pair/Dance Partnering Audition, where Jesi Miller and I teamed up as one of the only teams to come out of that year’s camp. Miller and Weiss placed sixth and seventh at the 2000 and 2001 U.S. Nationals, but the partnership ended in 2001, leaving Weiss to look once again.

Sfikas began skating when she was five. “Skating has been a major part of my life since I could remember,” she remembered. “My mom enrolled me into numerous activities because I was a bundle of energy. I participated in ice skating, gymnastics, and dance classes. I was also involved in acting and modeling. After enduring such an expensive and hectic schedule, my family gave me the choice to put all my energy and concentration into one activity. Without any hesitation I chose skating.”

“I chose skating because I feel that it is a combination of all the activities that I enjoy,” she continued. “Skating is a wonderful combination of grace and strength and it creates great character and style. I actually fell in love with the feeling of gliding across the ice and the tremendous speed that one can gain. I enjoyed the idea of wearing beautiful costumes and there’s nothing better in the world than the feeling of triumph after a practice, competition, or an exhibition.”

Sfikas competed in both singles and pairs, taking a pewter medal in senior ladies at the 1998 South Atlantics before competing in the 1998 Eastern Sectionals with a broken fibula in her right leg. Her first pairs partner was Josiah Modes, with whom she finished fourth in juniors at the 1998 U. S. Nationals after winning Easterns. During the 1998-99 season, she skated with Bert Cording, finishing tenth in senior pairs at Nationals. Then in the fall, Sfikas moved to England to compete with Andrew Seabrook for Great Britain, winning their first British pairs championship in 2000. They finished tenth at the 2002 Europeans before Seabrook retired from skating prior to the 2002 Worlds. She then tried skating with Mike Aldred, but the partnership ended badly.

Sfikas returned to the states to look for a new partner and was referred to Weiss by a friend. After six months of email and phone conversations, Sfikas traveled to San Jose, CA for an official tryout. “As soon as we started skating around the rink, the brightest smile emerged from my face,” she said. “Everything felt so right! Our skating gelled perfectly. I felt so relieved to finally experience such a wonderful feeling on the ice. Jeff is an extremely strong partner inside and out. I have great respect for him and I’m very lucky to have Jeff in my life. I’m unbelievably happy and excited as Jeff and I prepare for a promising future.”

Weiss was equally enthusiastic. “From the first moment that Tiff and I held hands on the ice, I knew that something special was happening,” he said. “She is an absolutely beautiful girl inside and out, and many people flock to her affability and charm. There is definitely something special in our skating, something that has been present from Day 1 and only builds stronger each time we hold hands. I don’t recall a time in my career that has felt more right than when I am on the ice with Tiff, and it is with this certainty that I hope to pursue our highest goals and most sought after dreams.”

“We enjoy the bond with your partner and having someone there by your side in good times and bad,” Sfikas said. “We really enjoy the thrill of the pair elements. Pair skating takes major strength and focus. We both enjoy doing pair spins, death spirals, and lifts. Jeff loves the twist, while I love throw triples.” They are currently doing side-by-side triple toe loops and triple salchows and throw triple loop and triple salchow in this year’s programs. Sfikas landed her first triple jump, a triple salchow, when she was 13, while Weiss landed his first triple toe loop at 17.

Chris Conte choreographed the couple’s 2003-04 programs, which included a classical piece performed by Benjamin Brittan for the long and Jimi Hendrix’s Little Wing performed by Stevie Ray Vaughn for the short. “Our music is chosen from a collaboration of our coaches and us,” Sfikas said. “We choose our skating music to bring out our personalities and our chemistry on the ice. We enjoy skating to music that moves us emotionally.” For the coming season, Weiss said, “Our short program is to the score of Legend of 1900 and is choreographed by our longtime friend and mentor Chris Conte. We will be keeping last year’s Brittan long program, but will be updating it for the 2004-05 season with Chris Conte.”

In addition to her skating exploits, Sfikas was also a “pageant girl” In her senior year of high school, she won Miss Teen of Chicago and participated in the Miss Teen of America Pageant in San Diego, California, winning the talent portion of the competition in which she displayed a video of herself skating to Sweet Home Chicago and recited a speech. She has also appeared in Seventeen Magazine. She now does some modeling work for skating wear.

The skaters are both well traveled. Sfikas has seen England, Scotland, Ireland, Iceland, and Switzerland, while Weiss has visited France, Hungary, Australia, Germany, and Italy. “I really enjoyed Reykjavik and Lausanne,” Sfikas stated. “I especially loved living in England and traveling through the British countryside. I hope to travel to Hawaii and Australia eventually. I’m also looking forward to visiting my roots someday in Italy and Greece.” Weiss said, “I really enjoyed Australia. I would love to travel to Turin, Italy, hopefully in 2006.”

For relaxation, Sfikas enjoys watching weekly drama and reality shows, reading thrillers, writing in journals, and scrap booking. As for Weiss, he said, “I thoroughly enjoyed weekend trips to Lake Tahoe with friends, burning by them as they snowboard down a hill as I use mini-skis, also known as snow skates. When I’m not in a cold weather environment, I enjoy reading, going to movies and clubs, playing pool, and my favorite pastime, cooking.”

“Even in eighth grade, I found myself drawn to the art of preparing food,” he explained. “This passion continued through high school, as I worked in an Italian deli and catering operation for five years. My cooking has taken me through several respected kitchens in the Bay Area, from Sous Chef work in Whole Foods Market to working with one of the largest catering firms in the Bay Area. Eventually, I intend on utilizing my skills to open several restaurants/bakeries of my own.”

As for her career aspirations, Sfikas would like to skate professionally in shows, then coach skating. Both she and Weiss already teach skating in Oldsmar to pay for their training, although they are actively seeking sponsors. Weiss has also found a niche as a personal trainer for the skaters and their parents at the rink.

Sfikas attended William Rainey Harper College in Schaumburg, Illinois, where she majored in English with a minor in Sociology/Psychology. She completed her freshman year as an honors student and served as Vice President for the National Honors Society. She plans to complete her degree once she finishes competing. “Skating will always be a part of my life,” she said, “but I am also interested in opening a party planning company for weddings, birthdays, anniversaries, graduations, showers, holiday parties, etc.”