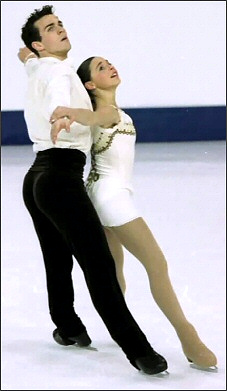 Jessica Dube and Bryce Davison nearly had a perfect figure skating season this year, winning every competition they entered except for Junior Worlds, where they finished second.

Jessica Dube and Bryce Davison nearly had a perfect season this year, winning every competition they entered except for Junior Worlds, where they finished second. But since they’re still eligible, the talented couple plans to return to Junior Worlds next year to try again for the gold. Dube won her second consecutive junior pairs title at the 2004 Canadian Nationals in Edmonton this year. Last year, she won the title with Samuel Tetrault. Dube and Davison won this year’s Junior Grand Prix Final after Dube finished second last year with Tetrault. And their silver at Junior Worlds was a big jump form Dube and Tetrault’s ninth place finish last year at Junior Worlds. They also won two Junior Grand Prix events, the SBC Cup in Japan and the Mexico Cup.

Dube began skating when she was four. “My mom put me in skating,” she said. “My older sister and I skated together.” Her sister, Veronique Dube finished fifth in juniors last year at Canadians. “My mother, my sister and my brother were all skaters so it looked like a fun thing to do,” said Davison, who started skating when he was three. “My brother and I were both hockey players too. I played recreational league hockey for ten years, up to AA. Mainly I played defense since I was stronger on my skates. I also played lacrosse in a league. Any sort of sport that looked fun I did.”

Both of the skaters are still competing in singles. Dube was second in junior ladies at Canadian Nationals, up from fifth last season. Davison finished tenth in junior men after winning the bronze in novice men last year. Dube said it was no problem competing in two events at Canadians. “I’m used to it now. I’ve been doing two events since pre-novice.” “I like doing the throws and lifts in pairs,” Dube added. “We do jumps in singles.” Davison said, “I love the lifts and the twists but everything has its own unique challenges.” Dube landed her first triple, the lutz, when she was 12. “The lutz is my favorite jump,” she said. “It’s easier for me than the salchow.” Davison landed his first triple salchow three years ago in practice. He doesn’t yet have a triple flip or a triple Axel although he’s tried them in practice.

Davison started in pairs when he was 12. He won juvenile pairs and placed fifth in pre-novice with Jessie McNeil, then finished fifth in novice and seventh in juniors with Claire Daugulis. The skaters started working together in July 2003 when the coaches contacted each other. “It’s been a great year because it all happened so quickly,” Davison said. “We jelled really fast.”

The skaters train with Annie Barabe and Sophie Richard in Drummondville, Quebec, They do two hours of singles practice five days a week and two hours of pairs, plus 45 minutes of conditioning every day. In the summer, Davison does more weight work and off ice work just lifting Dube. Barabe and Richard also coaches Dube in singles, while Davison works with Barabe, Kevin Wheeler and Linda Purdy.

David Wilson choreographs their pairs programs. Last season, they used Michael Babbitt’s Whose Woods These Are for their short and Romeo and Juliet for the long.” “I like classical music for pairs because it works really well,” Davison said. “I haven’t branched off yet. For singles, I like powerful music that if I skate well, my mom will cry.” “For Jessica’s singles, I like to have delicate music,” Barabe noted. Dube used music from the Patch Adams soundtrack for her short and Danse Macabre for her long in singles, while Davison used the Eagles’ Hotel California for the short and several pieces from the soundtrack of Sleepy Hollow for the long. Davison’s sister Ashley choreographed his short program. He also worked with Annik Schmidt and David Wilson on his long program. Both skaters like to listen to hip-hop music off ice. “I enjoy all kinds of music, including a little bit of techno dance,” Davison stated.

Dube enjoys biking, swimming, watching hockey games and going to the movies. She also likes the Harry Potter films. Dube keeps all of her stuffed animals, with Tweety Birds as her favorites. “Anything athletic I like to do,” Davison stated. “I was on the volleyball team in school and I still play some hockey. I like beach volleyball, wakeboarding, and water skiing.” He doesn’t collect anything. “I just try to be a normal kid and play with the kids I live with,” Davison said. “When I’m not at the rink, I’m usually on the computer, chatting with friends from around the world. Sweden was really fun and I like Colonna in Canada. Italy would be nice. Wherever I can go, I’ll go. The experience of going somewhere foreign is a really fun part of figure skating.”

Both of the skaters are still in school. Dube just completed the 11th grade at College Saint-Bernard, where her favorite subject was math. Davison is in the final year of high school through the Internet since there are no English-speaking high schools in Drummondville. Both of them plan to go to university in the future, but Dube has not planned on a career after skating. Davison said. “It would be really cool to get into some sort of medical work, but I like business too. I’d consider coaching but not choreography. I’m not that creative myself.”

“We plan to keep skating as long as we’re having fun and things are going well,” Davison noted. “It will be in pairs for sure.”