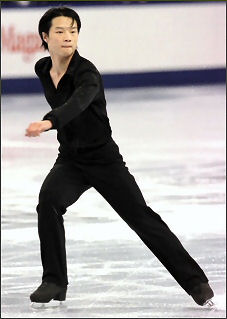 China's Song Gao is one of the most artistic of the Chinese men in figure skating.

China’s Song Gao is one of the most artistic of the Chinese men. “Figure skating is both a sport and an art,” he said. “You must train the artistic part inside yourself as well as the technical part to succeed.” Gao has been quite successful, winning the ISU Junior Grand Prix Final in 2000 and finishing fifth at this season’s senior Grand Prix Final in Colorado Springs. “I did not expect to go,” he said. “The time was too short between my two Grand Prix events, so I did not expect to get good results. I was exhausted in my free skate at the NHK Trophy.” But with a fourth at the Cup of China and third at NHK, Gao made the Final, where he finished fifth. “I felt very tired there because of the altitude,” he admitted.

Gao has been very consistent at Chinese Nationals, finishing in the top five each of the last five seasons. He was third at the Four Continents Championships in 2002 and eighth last season, sixth at Junior Worlds in 2000, and 16th in his only appearance at Worlds in 2002. Gao wants to become world champion, but when asked how long he planned to skate, he said, “Only until I am 29. When I’m 30, I’ll be a man. I’ll need to think about getting married and having a family.”

This season, Gao is currently slated to compete at Skate America and Trophee Eric Bompard.

“My parents wanted me to skate,” he said. “They took me skating when I was four. My first triple jump was the toe loop. I was about eight. Last year I landed my first quad toe loop. I’ve tried the quad salchow but haven’t landed one.” Gao is using a quad toe/triple toe combination in both his short and long program. “I like the quad toe loop the most,” he said. “I like the feeling of meeting a new challenge and being successful.”

The 23-year-old trains in Beijing with Xu Zhaoxiao, his coach for ten years. He skates for three to four hours five days a week and does another hour or two of off ice work. That includes running and bodybuilding all year, plus ballet classes in the summer. Gao also does jump training off ice, using a trampoline or a harness. Before competitions, he works in front of a mirror by himself, trying to improve his posture and carriage.

Gao chooses his own music and does his own choreography. “I like music very much,” he said. “I listen to a lot of music and when I find something I like, I try to skate to it. I like soft piano music, modern not classical. Because I know the music, I choose the order of the elements for what is best for me.” For the 2003-2004 season, Gao used Angelique by M. Magne for his short program and music from the Pirates of the Caribbean soundtrack for the long. “My choreographer (Jiang Hailan) helps me with the starting and ending positions, arm movements and other things like that, Gao added. “My coach gives me opinions on the technical parts of the program.”

“I want to become a famous coach,” he stated, adding that he wants to major in English at the university. “I also want to learn Korean. I liked Korea and I would like to go there again. The Korean girls were very soft and I liked the feeling I got when I was there.” He would also like to see Switzerland some day.

To relax, Gao likes listening to music, disco dancing, playing computer games, and playing soccer. “I am a shooter,” he added. He likes listening to guitar music and wants to learn how to play. He also likes to watch movies, mainly love stories. “I also keep all the toys and the letters from fans,” he said. “They are very nice.”