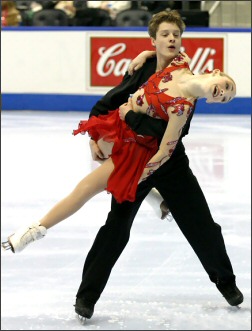 In the ever changing world of U. S. ice dancing, where partner switching is de rigueur, Meryl Davis and Charlie White have been together for eight years.

In the ever changing world of U. S. ice dancing, where partner switching is de rigueur, Meryl Davis (17)and Charlie White (16) have been together for eight years. During that time, they have moved up from second in juvenile dance in 1998 to first in intermediate in 2000, second in novice in 2002 and finally second in juniors this past season. Even more astounding is that they’ve had the same coach for all that time, Seth Chafetz, of the Detroit Skating Club.

The dancers plan to compete at least until 2010. “We don’t have any plans to stop,” White said. “I want to skate until my knees give out. We want to stay in juniors for now. Our goal for this year was to get to Junior Worlds and we accomplished that. Next season, we want to go to the Junior Grand Prix Final and make the top five at Junior Worlds.” This year, they finished 13th at the World Juniors and fourth at both the SBC Cup and Czech Skate. Their only international win so far was at the Helmut Sebeirt Memorial in Vienna in 2002. “We also want to improve our standings each year at Nationals,” Davis added. The team is currently scheduled to compete in two Junior Grand Prix events this season – Romania and Serbia & Montenegro.

White began skating when he was five. “My mom started me skating so if I went to the rink with friends, I’d be able to skate,” he said. “I started playing hockey as a center in midget A and I’m still playing. Our team was the state champion a few years ago.” He’s also skating freestyle, winning a bronze medal in novice men at this year’s Nationals. “My coach actually had me start dance to smooth out my skating when I was seven,” he said. “Then I started with Meryl when I was eight. All of my skating is fun in different ways. I like them all about the same, but hockey is more for recreational fun.”

Davis started out when she was five. “We lived on a lake so we skated on it in the winter,” she said. “I started out just doing some singles, then I started dance when I was eight. I got as high as Mids (Midwestern Sectionals) in novice ladies, but I took this year off from competing in junior ladies.”

Chafetz said, “It was my bright idea to put them together. Meryl was a standout at our rink, our best skater. So I put them together and they took off. They got it right from the first second.” “Meryl’s very easy to get along with,” White stated. “She’s not pushy like some people and we click well together.” “Our personal lives go well together,” Davis echoed.

The dancers train for two hours a day, six days a week, for dance and another hour and a half each for freestyle. They do about one to two hours of off ice work, more in the summer. White does tae bo and kick boxing, while Davis does conditioning and ballet every morning, plus some additional work at home.

Last season, Marina Zueva choreographed the couple’s free dance using Hasta Que Te Conoci and De Mis Manos – Boy a Bonqustarte Que Viva la Alegria. “It’s a little more mature and lively than we’ve had before,” Davis said. “My mom found part of the music. She looks for music for hours. Whenever we watch a movie, she says that will work for skating. Our coach and the music person found the other parts.” Elizabeth Punsalan choreographed the swing combination original dance. It included Pennsylvania 6500, Lightnin’ Slim Boogie , and This Cat’s on a Hot Tin Roof. “We generally like to use fast music,” White added.

They didn’t have any favorite compulsory dances. “We work so hard on all of them,” White said. “They all have pluses and minuses. It’s kind of cool to do different ones.” Off ice, he listens to all kinds of music while she said, “It depends on my mood.”

To relax, White watches television, plays video games, and reads all types of books, but mainly fiction. She also likes to read fiction as well. She also likes to spend summers at the lake wakeboarding, water skiing and doing other water sports. She has a pet dog, while he has two cats and a dog. Neither of the skaters collects anything.

Both skaters will begin their senior year in high school this fall and both of them like science. Davis also likes English. He plans to go into a career in engineering, but she’s still undecided. “I might be a coach as a side job,” she noted.