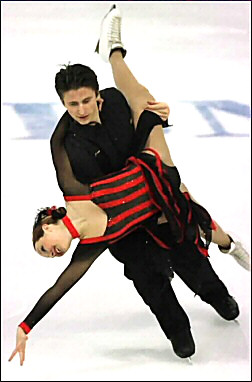 Ice dancers tend to be on the flamboyant side, so the last thing you might expect from one is to admit to a more serious side like that of Amy Saucke-Lacelle and Jamie Britton.

Ice dancers tend to be on the flamboyant side, so the last thing you might expect from one is to admit to a more serious side. But that’s what you would get from Canada’s Amy Saucke-Lacelle and Jamie Britton. “We’re both kind of nerds,” Saucke-Lacelle admitted. She is in CEGEP studying science, with a goal of working in the medical field after college, while he is working as a research assistant in chemistry and plans to study science at the university. “I like ethics, science, political science, and philosophy,” Britton said, “things that have a relevance to the real world.” We’re both very technical as skaters too,” Saucke-Lacelle said. “Our coaches are working very hard to help us bring out our creative side.”

Saucke-Lacelle and Britton had been a team for only six months when they finished 11th in junior dance in their first trip to Canadian Nationals in 2004. When they first got together, it was a long distance relationship. “I told one of my coaches that I had seen Amy skate and he contacted her,” Britton recalled. “We had a tryout, and it felt really good, but she was in Montreal and I was in Calgary. “The first time we skated, it felt so easy and natural, we both knew we had to skate together,” Saucke-Lacelle stated,” but we both had three months of school left.”

The dancers spent the summer training in Calgary, and then returned to Montreal in September. Darryl Van Luven and Shawn Winter are the couple’s coaches in Pierrefronds, where they train four hours a day five days a week. “It’s a team-motivated program,” Saucke-Lacelle stated. Off ice, Kathy McCraw teaches them ballroom dance. They also go to the gym on their own. Britton also does some cycling, while Saucke-Lacelle snowboards for fun. “I used to ride horses a lot,” she recalled.

Julie Marcotte choreographs most of the couple’s dances. Last season, for the swing combo original dance, they used B. B. King’s My Sweet Little Angel and Shout by the Isley Brothers. For the free dance, they used Hey Big Spender and Kingot Swing. “We had to listen to music over the phone,” Saucke-Lacelle said. “We didn’t know each other at all, so it was like picking music out of a hat,” Britton added. “She really liked Big Spender so we did a show program with it, then I decided I liked it.”

For the 2004-2005 season, the dancers are using music from the soundtrack of Assassination Tango and a tango selection by Astor Piazzola for their free dance, choreographed by Marcotte. Their original dance is a foxtrot to K. D. Lang’s A Kiss to Build a Dream On, and a quickstep to Cheek to Cheek by Frank Sinatra, choreographed by Bernie Ford. Off ice, Saucke-Lacelle listens to hip-hop and alternative music, while Britton listens to “anything except hip hop”. He especially enjoys blues and jive.

Saucke-Lacelle began skating when she was four “because my older sister was a skater and it looked like fun,” she remembered. “I skated freestyle until I was 13. My little brother was doing dance and I had done solo dance before. I liked the idea of having a partner on the ice.” Britton started skating when he was eight. “I played hockey for a year because I wanted to try it. I played defense.” After he began concentrating on figure skating, Britton made it to Western Divisionals in pre-novice and was trying triple jumps before he started dancing at 13. “I tried doing both for a couple of years,” he said, “but I enjoyed dance more and there wasn’t time to do both.”

In addition to his work as a research assistant, Britton spends several additional hours a week partnering test skaters in Quebec and Ontario to pay for his skating. “I’d like to stay involved in the sport because I like teaching, but more as a hobby, not as my base,” he said. “I definitely plan to stay involved after competing,” Saucke-Lacelle noted, “but not as a coach. I don’t like the cold.” This summer, she also spent time as a hospital volunteer.

With work, school and skating, they don’t have too much time for hobbies, but they both enjoy reading, music, travel and hanging out with friends. “I like reading, both fiction and non-fiction,” Saucke-Lacelle said. “And I spend a lot of time on the computer.” “I like talking politics and philosophy,” Britton stated. “I read anything in those fields. But I don’t use a computer much because I don’t like reading off the screen.”

Saucke-Lacelle also has a lot of stuffed animals, especially Beanie Babies, and one unusual collection — two books with the autographs of almost all the old-timer hockey team. She also sews and made a skating dress for a project. “I’d like to wear it for a tango or something Latin,” she said. “I really like the rhumba and the samba.”

For travel, Saucke-Lacelle said, “I like to go to warm places. I was supposed to go to Haiti on a project to help out last year, but the trip got cancelled because of the tryout. I’m hoping to go this summer. I’d like to go to so many different places.” In contrast, Britton said, “I like to go to places with mountains and unique lifestyles, everywhere except Asia. I definitely want to go to Brazil.”

After Canadian Nationals, the dancers participated in the Saskatchewan Road Show, skating in five shows in five towns in one week, and covered at least 2000 kilometers, gaining experience for the 2004-2005 season. “We plan to continue competing as long as we’re having fun,” Britton concluded.