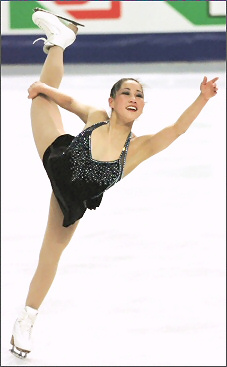 Jennifer Don is the only U.S. skater competing nationally and internationally at the senior level in both ladies and pairs.

Jennifer Don, a 19-year-old from Sugar Land, Texas, is the only U. S. figure skater competing nationally and internationally at the senior level in both ladies and pairs. Don finished eighth in senior ladies and fourth in senior pairs with Jonathon Hunt at the 2004 U. S. Nationals in Atlanta. Then she finished her season by placing 13th in ladies at the Four Continents Figure Skating Championships in Hamilton, Ontario, Canada. In the 2002-2003 season, Don finished 11th in senior ladies at Nationals and sixth in senior pairs with Hunt. The couple also took bronze medals in pairs at Junior Worlds and the Junior Grand Prix Final in 2003.

In singles, Don won the 2003 Nebelhorn Trophy and the 2003 U.S. National Collegiate title and placed sixth at the Golden Spin of Zagreb. At U. S. Nationals, she won the bronze medal in novice ladies in 2001 and the silver medal in junior ladies in 2002 before moving to seniors.

Don began skating when she was ten. “A rink opened near my house,” she said. “I had watched skating on television and told my mom I wanted to go. I didn’t do any pairs until I was 17. I honestly don’t know how I stumbled into it, but I loved watching pairs on television and thought the lifts were really cool. I love the freedom that comes from singles skating, but in pairs skating, there’s no better feeling than to step out on to the ice and know that there is someone next to you that you can trust.” Don landed her first triple jump, a triple toeloop, when she was 15. But jumps aren’t her favorite moves. “My favorite element is my blade layback,” she said of a move that has become one of her trademarks.

Don has been training in Delaware but is looking for another training location. She usually does six sessions a day, five days a week, and a couple of extra sessions on Sundays, to cover both singles and pairs, a total of 18 hours a week. “It’s tough to do both,” she said, “but skating both disciplines has made me a stronger skater.” Her eight hours of off ice training each week includes dance classes, off ice lifts and weight training. She works with Jeff DiGregorio and Pam Gregory for singles.

Paul Wylie choreographed Don’s long program for the 2003-2004 season, using Butterfly, Graduation, and Freedom Battle. She choreographed the short program herself to Journey of Man and will be keeping it for 2004-2005. “I normally choose my own music,” she said. “I went to Washington, DC to see the Journey of Man at the IMAX theatre. The music was very moving and I could just picture skating it in my mind. I was also awed by what the performers were doing and the amazing forms they created with their bodies.” For an exhibition program, she used A Love Before Time sung by Coco Lee from the soundtrack of Crouching Tiger, Hidden Dragon. Off ice, she listens to all kinds of music.

Don is currently enrolled as a full time freshman at the University of Delaware, where she is a pre-medicine major. She made the Dean’s list in her first semester with all A’s. To help pay for skating and school, she coaches several students and choreographs other skaters’ programs. One of the pairs teams that she coaches with Hunt qualified for Junior Nationals as intermediates.

With her hectic schedule, Don doesn’t have much time to relax. “I divide my life into S’s,” Don said,” skating, school, studying and sleeping with a little socializing and shopping.” She also used to be a competitive swimmer, another ‘S’. And she keeps all the stuffed animals from the competitions.

Don enjoys the trips that come with competitions. “Skating gives you an opportunity to see things that most people don’t get to see,” she said. “I’ve traveled to parts of the former Yugoslavia three separate times. Wherever I travel, I try to make the most of the experience by taking side trips to visit local attractions. When we went to a competition in Milan, we made a day trip to Venice and when we were in The Hague, we visited Amsterdam. I’d love to visit Australia and I want to take a vacation on a warm, sunny beach.”