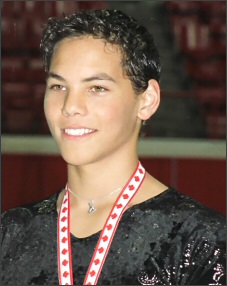 Switzerland’s Jamal Othman may be the sport’s tallest singles skater at six feet, three inches (186 cm). If not, he’s close to it. Othman is just starting to recover his form after an ankle injury cost him most of the 2002-2003 season. “I had surgery on my ankle last year,” he said. “I injured it for the first time three years ago. After that, my whole season was gone. Then I hurt it again and had to have the surgery. I started back skating in July of last year but couldn’t do any jumps until September. Now I can practice like I want.”

Before his injury, he had won the silver at the Junior Grand Prix in The Hague in 2001 and bronze medals at the ISU Junior Grand Prix in Montreal and Trofeo Rita Trapanese in 2002. At the 2002 Junior Grand Prix Final, he finished ninth. Othman also won the Swiss novice title in 1999 and the junior gold medal in 2000 and 2001. He has a silver and a bronze from Swiss seniors. But he has not fared well at Junior Worlds, with a personal best of 18th in 2002, the second of his four trips there. Despite his injury, Othman elected to compete at the Gdansk Cup and SBC Cup where he finished 13th and sixth, respectively. Currently, Othman is scheduled to compete at the upcoming Junior Grand Prix event in Harbin, China.

Othman started skating at the age of six, but he had actually tried gymnastics and rock and roll dancing before that. “I told my mother I wanted to go skating,” he said. “Once I began figure skating, I stayed in it. I like it because it combines dancing with music and athleticism with the jumps and the spins.” Although he is one of the taller skaters, he never tried pairs or dance. “I always wanted to skate alone,” he explained. “Jamal could never be without jumping and spinning,” added his coach, Jacqueline Kiefer. “But since he rose up in height, his jumps must be perfect.”

He landed his first triple salchow when he was eleven and still considers the salchow, along with the triple lutz, to be his best jumps. He didn’t land a triple Axel until the middle of last year after being slowed by injuries the previous season. This season, he hopes to add a triple lutz-triple loop combination to his arsenal. “With the new system, he needs more triple-triple combinations,” Kiefer noted.

Kiefer, who has always been Othman’s coach, added, “His practices still must be controlled. He cannot do too much on the ice every day.” Othman practices for about an hour and a half on ice for five days a week, not much time to prepare for both junior and senior competitions. “We made the junior program long and the senior program short,” Kiefer explained, “so it’s no big deal to change between junior and senior. It’s only a few seconds difference.”

Othman does more off ice work. He has dance classes for two hours a week, physical conditioning and weight training for three hours a week, plus other off ice activities adding up to over ten hours a week. He also goes to Atlanta for a few weeks in the summer to work with Herbert Wiesinger and Almut Peyper on his choreography when there’s no ice in his hometown of Bern.

Because he lost so much training time, Othman kept his long program from last season, set to music from the soundtrack of L’Ultimo Bacio. “If a program is good, we’ll keep it for up to two years,” Kiefer said, “but usually we try to do two new programs. I pick the music and the costumes. We use lots of classical and Latin music, but next year we may try something more modern.” “I like different styles,” Othman said. “I just need to like it. It has to be the one.” Off ice he mainly listens to R&B and hip hop music.

He also cuts his own music on the computer. “I’ve been doing that for years,” he said. “I also do autograph cards and Christmas cards on it. And I chat and look at some of the skating news.” Othman also likes to go out with friends and watch all kinds of movies. “I play beach volleyball in the summer and swim,” he stated. “Maybe once a year, I’ll play some hockey with some friends.” He collects key chains but often gives his stuffed toys to younger skaters training with Kiefer.

On his travels, he has enjoyed visiting Montreal, Milan and Japan. “Montreal was like a European city, but big as in the U.S.,” he said. “I liked the shopping too. It’s a big hobby of mine.” Someday he’d like to visit Malaysia again. “My dad is from Malaysia,” he noted.

Othman will graduate from high school in the summer of 2005. “I’m interested in going to university to study law, but I’m not sure yet,” he said. “I also like languages. I know French, German, English and some Italian.” For now, he’s focusing on reaching his skating goals – Europeans, Worlds and the Olympics. “I’ll be skating as long as it works for me,” he said.