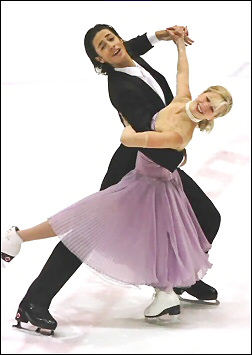 Canadian junior dancers Alice Graham and Andrew Poje, both 17, hope their new partnership will allow them to place well in the Junior Grand Prix series and medal at Canadians in junior dance. The couple started strongly at Minto Summer Skate in Ottawa, bringing home a gold in compulsories, and a silver in the original and free dances.

They then crossed the border to compete at the Lake Placid Ice Dance Championships, winning the original dance and placing third in the free dance in their group as well as winning two golds and two silvers and finishing third overall in the compulsory dance championship round.

Then it was off to Courchevel, France for their first Junior Grand Prix, where their luck changed for the worse. The luggage for the Canadian skaters from Ontario got lost so they were unable to practice. When most of the luggage did arrive, Graham’s skates were not there. Jane Summersett offered Graham her skates and a dress but Graham’s skates and costumes finally arrived just before the compulsory dance. They eventually finished fifth overall. Long-term, Poje said “We’ll just take it one year at a time and see how we feel.”

Poje began skating when he was six. “My sister was at the rink skating and I had nothing else to do,” he stated. He started dancing the next year “because they needed more guys in dance and my coach thought I’d make a good dancer. Something about the footwork and trying to express the music made it more interesting to me.” Poje also continued skating freestyle until he was 13, reaching the juvenile level. Poje danced with another partner for a year, before skating with Alexandra Nino for nine years, finishing fourth at 2004 Canadians in juniors.

Graham started when she was around eight or nine years old. “I always liked dancing around my house just for fun,” she remembered. “Since we are in Canada my Mom and Dad thought I might like figure skating. I thought it was great because I would show off for all the parents.” The Grahams are a skating family, she added. “My younger brother Jesse was the Canadian Juvenile bronze medallist but has moved on to other sports. My older brother, Ben, played recreational hockey and my Dad is an old timer hockey player.”

Although she competed in singles, Graham admitted, “I was never a really good jumper, just a performer. I also competed in synchro and enjoyed the team camaraderie. I started ice dancing when I was 13. Ice dancing is very different than singles. I like how I can concentrate on all the little details like leg extensions and edges. I think ice dancing was made for me because I’m able to express the emotions I’m feeling to an audience. Having a partner is also great because the choreography is so much more interesting with two bodies.”

Graham was the 2002 Canadian Novice champion with her original partner of three years, Eric Neumann-Aubichon, and finished fourteenth at Canadians last year with Iliya Koreshev. She and Poje began skating together part-time in March, and full time at the end of June. “I had skated with a couple of really nice guys but for personal reasons those partnerships came to an end,” she lamented. “I still really wanted to compete and fortunately there were a few other great male skaters in the same situation. Andrew and I decided to skate together after a few tryouts, but I knew I wanted to skate with him from the first time we stepped onto the ice together.”

The dancers train at the Kitchener-Waterloo RIM Park with a team headed by Paul MacIntosh. “Rebecca Babb and Susie McGrigor are also important coaches on our team in Kitchener,” Graham said. “We also work with Bernie Ford when our schedule allows. It has been rather crazy this summer getting everything ready, my move to Kitchener, a new partnership, new programs, finishing school in Montreal, new surroundings and now competition and preparation for JGP’s. We plan to work more with Mr. Ford this fall.”

They work for four hours on ice and one to two hours in the gym five days a week. They also take ballet in the summer. “The strength, flexibility and control it develops is helpful,” Graham noted. She also runs, swims, cycles and rollerblades.

Julie Marcotte choreographed the couple’s programs, while Babb and McGrigor helped with details and polishing. Their coaches let them do some of their own choreography. “It was great how we were able to have input with our programs,” Graham said. “I think that it is important because if certain steps don’t feel right, it will probably have to be changed later down the line although we like trying anything the choreographers throw at us.”

They are using Seal’s Mona Lisa and Almost Like Being in Love by Nat King Cole for their original dance and Cuka Rocka, Traeme Paz, and Malaguena from the soundtrack of Once Upon a Time in Mexico for the free. “My Dad picked the free dance music and mixed it and Mr. Mac picked the OD,” Graham said. “We bounced around lots of music possibilities. It was a real team approach. I like music that is unique and draws the audience into our program. I don’t prefer any one style but it is an essential part of a good program” “I like music that brings out our skating abilities and emotions,” Poje added.

“I like dances that challenge my abilities, like the Austrian Waltz,” Poje said. “That’s the hardest dance I’ve ever done.” Off ice, he listens to “a large genre of music, mostly rock and alternative,” he said. “The type of music I listen to depends on the mood I’m in,” Graham said. “I like most music with the exception of the pointless screaming stuff; that’s more like noise to me.”

With school and skating, neither skater has much time for off ice pursuits. “I’m usually pretty tired in the evening because my day starts at 5 AM,” Graham said. “In the evening after homework is done, I like to snuggle up in my bed and watch TV until I fall asleep. I like to get home to North Bay when I can and spend time with my family. We live on a lake and I like all water sports in the summer. In the winter I like cross-country skiing and snowshoeing or skating on the lake. Poje partners other dancers two or three evenings weekly as well as being a member of the Alpine Dancers, a German folkdance group, with his sister. To relax, Poje plays video games, golf,and roller hockey and snowboards. Both skaters use their computers mainly for schoolwork, but have a new website at www.aliceandandrew.com.

As for travel, Graham said, “I went on a school trip this past spring to Europe. It was a blast meeting all kinds of new friends, traveling on trains and trekking around.” Poje likes to travel, but doesn’t have any particular place he’d like to visit.

Graham just graduated from the Quebec school system and decided to enter grade 12 in Ontario. She is an honor student who won the Bryden Murray Award for highest academic and athletic achievement in the sports study program. “I plan to continue my education through university and keep my door open to opportunities,” she said. “I’m thinking about something in the field of nutrition but I really don’t know exactly what I will be doing after skating. Maybe skating and a good education will open doors that may not have been open to me otherwise.”

Poje is also an honors student going into grade 12. Although Poje’s studies focus primarily on math, sciences and business aspects, he at times surprises even himself on his literary skills. He plans to pursue a career in the future as an orthodontist.