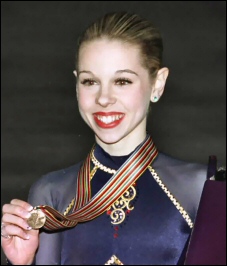 USA’s Katy Taylor was the wild card at the 2004 World Junior Figure Skating Championships. Although she had finished second at Skate Slovakia and fourth at the JGP in Japan, Taylor had not qualified for the Junior Grand Prix Final and all of the finalists were in The Hague for World Juniors. “I had no idea I would make Junior Worlds,” she said. “I was shocked because usually they take the girls from seniors. When I came, I hoped for the top ten so winning the bronze medal was really cool. My performance was one of my better ones. When I saw the 5.7, I thought it was really cool. Those are the marks you see for seniors so I felt like a senior.”

The 14-year-old from Houston, Texas made the team by finishing second in junior ladies at U. S. Nationals, following up her silver medal finish in novice ladies the year before. “I was third in juvenile and tenth in intermediate, so my goal at my first Nationals was not to get last. This season, I just hoped to make Nationals and make the top half.”

For the 2004-2005 season, Taylor finished third overall at the JPG event in Budapest, Hungary. One of Taylor’s goals this season is to make the Junior Grand Prix final. Next stop is the JPG event in Chemnitz, Germany next month.

Taylor tried a lot of different activities when she was younger. “I tried swimming, gymnastics, soccer, ballet, tennis and T-ball,” she said. “I didn’t start skating lessons until I was six. Actually when I was about four and a half, we were playing charades and my parents were trying to guess what I wanted to be and they thought I wanted to be a ballerina, but it was a figure skater.”

She landed her first triple jump, a triple loop, when she was ten. After using a triple lutz-double toe in her short and long programs this season, she wants to have a triple-triple next year. “I plan to work really hard on getting my triple lutz-triple toe and triple toe-triple toe,” Taylor said. “I’m also hoping to make progress on my triple Axel. Then I’ll go from there.”

Taylor practices for three hours a day, five days a week, plus another two hours on Sunday on ice. “I do about an hour a day off ice,” Taylor said. “I work in the gym with my trainer, Jeff Peacock, and my off ice coach, Catherine Ondrusek works with me on a program that’s like Pilates.” She works with Jana Conter and B. L. Wylie on the ice. “Miss Jana has always been my main coach,” Taylor said. “I go to Mrs. Wylie for stroking and polishing.” Taylor also takes ballet one day a week under the tutelage of Mary Ling. “I really like working with Mary because she realizes I’m a figure skater and not a ballet dancer and she works with me in that area.”

“My coach and I both look around for music,” Taylor said. “Then we each listen to it and decide. I like to try different things and then grow into them. I like music that changes with high and low points that let me show off all my different kinds of skating. Last year, we wanted music with a patriotic theme. That’s why we used the American medley.” The medley, which Taylor used for her long program included selections from America the Beautiful and the soundtrack of the movie Patton. Her short program music was an Irish medley by Leahy Lakefield while her exhibition program was to I Hope You’ll Dance. “I heard that on the radio and really loved it,” Taylor explained. “It shows the prettier side of my skating.” Conter choreographs all of her programs. Taylor kept her short for the 2004-2005 season and is using Rhapsody on a Theme by Paganini by Rachmaninoff for the long.

Taylor is in the ninth grade in public school. “I like Spanish,” she said. “It’s interesting to have a new goal every week and to see if I can learn some new words.” After she finishes high school, she plans to go to college. “My ultimate goal is to go to the Olympics,” she said, “probably 2010. That’s my main goal. Then I want to do tours like Stars On Ice and Champions on Ice. I want to be either a chef, a lawyer, a psychiatrist or a veterinarian. I love cooking, I love debating and standing up for what I believe. I love animals and I love to help people with their problems.”

She has one dog herself, a cocker spaniel-golden retriever mix. “I like playing with my dog and hanging out with my friends,” she said. “I also like to play tennis with my dad on Saturdays. And I like to cook and swim. I like to read mysteries and books related to skating. Sometimes I go online and chat with friends or look at some of the skating sites. A few girls put together a website for me after Nationals.” She also collects “anything with frogs or butterflies.” Her favorite trip was to Venice, where she enjoyed riding in the gondolas and shopping. Some day, she hopes to go to Hawaii.