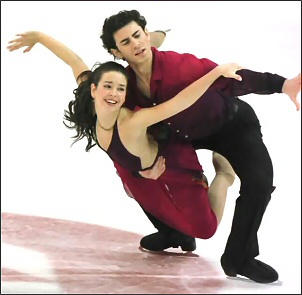 Canada's Bradley Yaeger, who competes in senior dance with Mylene Girard, has the rare distinction of being the only competitive figure skater who has been clinically dead, yet was brought back to life and resumed competition.

Canada’s Bradley Yaeger, who competes in senior dance with Mylène Girard, has the rare distinction of being the only competitive skater who has been clinically dead, yet was brought back to life and resumed competition. “I was just working in the kitchen when I passed out and fell on the floor,” he related. “My head hit the corner of the counter and opened a huge gash, so I went to the hospital. They hooked me up to a monitor and it happened again. I flat lined for about 13 seconds before they got my heart started again. Something electrical in my heart wasn’t conducting right so it would just slow down and then stop. So they put in a pacemaker.”

“It puts things in a different perspective,” said the 19-year-old. “Athletes feel invincible but we’re as vulnerable as anyone else. When the reality sank in, I began to really appreciate the smaller things. Just being outside after being in the hospital was great. I was in the hospital for two weeks, and then I had a month-long recovery period. I couldn’t skate for a month and a half so we were very late getting ready for the season.”

Girard and Yaeger finished eighth in senior dance at the 2004 Canadian Nationals after winning the silver medal in juniors the previous season. They have only been skating together since August 2002, after Girard split from Brian Innes, when he decided to pursue his education after winning the junior dance title with Girard earlier that year. “We just hoped to make a good impression on the judges, because they hadn’t seen us,” Yaeger stated. “We want to make the National Team and plan to skate until the 2010 Olympics.”

Yaeger was a late starter in figure skating. “I started playing hockey when I was three,” he recalled. “I played center or left wing through pee wee hockey in Ottawa. I could skate fast, but I had trouble stopping so I got into figure skating lessons when I was ten. I stopped competing in hockey when I was 12, but I still play some for recreation. I got up to pre-novice in singles at Divisionals, but I only had one triple jump, the loop, which I landed when I was 14.”

Yaeger competed in juvenile dance with Stephanie Arsenijevic, then competed with Sabrina Granata for five years, reaching as high as third in juniors at Canadians. “We both went in different directions after that,” he explained. “I knew Mylène from competing with her and we had become friends. We played with the idea of working together on the phone, and then organized a tryout and it went well. Mylène’s the most determined person I’ve ever seen. We both have similar skating styles, but we haven’t had time to build the chemistry on ice.”

The dancers train with Igor Tchiniaev at the St. Hubert Club, working on ice for three to four hours a day, five days a week. They also take ballet twice a week and ballroom dance classes as well as working at the gym on their own. Tchiniaev also choreographs most of their programs. For their swing combo last season, Girard and Yaeger used Bee Bop A Lula and Great Balls of Fire, while for the free dance, they used La Notte Etterna.

“For last year’s free dance, we played around with a lot of ideas,” said Yaeger. “Mylène found this music and felt that it would capture the audience. It was a big change from our first year’s Santana program.” This season, their free dance is to two Russian waltzes by Evgeni Dolga, and was choreographed by Igor Tchiniaev. The original dance is a foxtrot and a quickstep by the Atomic Fireballs, and it was choreographed by Angelika Krylova.

“Choreography interests me,” Yaeger stated. “We participate a lot in the choreography for all of our dances. The movements are our own. It’s important that the movements be our own rather than acting out what some other person gives us.”

“Typically for the compulsory dances, I enjoy anything,” Yaeger said, “but I love the tango and I like the Austrian Waltz. For the original dance, I prefer a more dramatic style than rock and roll. For this year’s free dance, we played around with a lot of ideas. Mylène found this music and felt that it would capture the audience. It’s a big change from last year’s Santana program.” Off ice, he listens to anything, but prefers acoustic and modern techno music. He listens to a lot of Dave Matthews and John Mayer.

Yaeger is very musically talented himself. He began playing the piano when he was five, then played a lot of different instruments in high school, including the oboe and the clarinet. He was a drummer in the school’s jazz band and currently plays the guitar, an instrument his father favors. Yaeger’s mother played clarinet for several bands.

To relax, he likes to go out with friends, go to parties, and watch movies. “I’m a big movie buff,” he said. “I love Canadian and foreign movies. I watch a lot of independent cinema rather then the cliché-driven Hollywood films.” He also collects coins from other countries. “The collection was passed down to me from my grandfather and I’ve continued it,” he said. He also uses the computer to chat all the time with friends and skaters from overseas. “One advantage of skating is the ability to travel,” he stated. “I prefer travel to anything else in life. Helsinki was very beautiful when we were there. I’ve planned a trip to Israel and Jordan and I’d love to visit Egypt and Greece.

To help fund his training, Yaeger currently assists other skaters for a couple of hours a day, five days a week doing dance partnering. He is taking college correspondence courses in political science, philosophy, and English and plans to go to law school in the future.