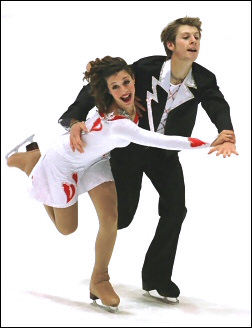 Ice dancers Lindsay Cohen and Evan Roberts moved from intermediate to juniors this year, based on the recommendations of their figure skating coaches.

Lindsay Cohen and Evan Roberts moved from intermediate to juniors this year, skipping novice based on the recommendations of their coaches. “Our goal is to put out the best performances we possibly can and leave a good impression with the judges, Cohen said. “Of course, we’d love to place in Sectionals and go on to Nationals. “We would just like to get the competition experience of skating well in the higher levels,” Roberts added. “For our career goals, we want to at least make it to Worlds, and if everything goes our way, skating in the Olympics is our all time dream.”

Last season, the dancers finished tenth at the U. S. Junior Nationals in Scottsdale, AZ after winning the 2004 South Atlantics. This season, Cohen and Roberts started by finishing fifth in the junior original dance and seventh in the free dance at the Lake Placid Ice Dance Championships in August. They also finished sixth in the Cha Cha Congelado and the Argentine Tango and tenth in the Starlight Waltz and Blues to finish seventh overall in compulsory dances. They are currently slated to compete at the 2005 Pacific Coast Sectional Championships in November.

Both of the skaters began at the age of five. “I wanted to start skating after my parents took me to a public skate one day for fun and I really liked it,” Roberts recalled. “It didn’t take long before I got hooked and started pursuing it as a real sport instead of just a fun thing to do once in a while. I started skating in a toddler and parent class at the Skating Club of Wilmington. From there, I took additional group lessons and did public skating. I started with my first private coach, Phillip Frazer, at around age eight. Mr. Frazer was a former Canadian ice dance champion.”

“Both of my brothers played hockey,” Cohen said. “My oldest brother, Ryan, played for the Philadelphia Junior Flyers team. I was constantly at the ice rink with my family, watching my two older brothers play hockey, so I told my parents I wanted to skate too. From age seven to fifteen, I competed in singles freestyle up to the novice ladies level. My highest ranking in the South Atlantic Regional Championships was 12th in novice. I started ice dancing at around age 10. I think in dance you are able to express yourself entirely differently then in singles. I love being artistic, and also because I love having someone to talk to on the ice.”

“I spent most of my early skating years, before becoming an ice dancer, doing singles,” Roberts said. “I was never very competitive at it, but I practiced quite a lot in the hope of competing one day. However, instead I chose to do dance before ever really getting into freestyle competition and I never looked back. I also did two years of synchronized skating with one of the University of Delaware teams. That was different, but not enough boys in the sport.”

“I started ice dancing 4 years ago with my first partner, Allie Novertia,” Roberts continued. We competed one season at South Atlantic Regionals in juvenile. I like dance because I can express myself much more than I find I can do in singles. Also, I find it technically more interesting because when you have a partner, your routines become much more about understanding and interacting with each other.”

Cohen and Roberts started skating together in 2002 after she split from former partner Torsten Joerger. “Our original coach, Jerry Santoferrara, put us together in the hope that we would be a good match for each other,” Roberts said. “We had both just come out of other partnerships and were still interested in dancing. Jerry Santoferrara and Gary Irving were our primary coaches for our first two years. In preparing for Lake Placid this year, we worked with a number of different coaches, led and coordinated by Gary Irving. This team included Natalia Linichuk, Vitali Potipov, Jerry Santoferrara, Scott Gregory, Jonathan Hunt and Joel McKeever. After Lake Placid, Natalia Linichuk and Genadi Karponosov will be our head coaches.”

They train at the University of Delaware in Newark, DE. “During the summer, we train for six forty minute sessions every weekday with a 40 minute off-ice work-out in between,” Roberts said. “During the school year, we both get out early and train from 12 – 5:30 daily, plus off ice work-outs.” In addition, Roberts said, “I do a lot of pedal and motor biking outside of skating, just for fun. But it does help with my cardio conditioning and stuff. I play around with BMX biking and ride my dirt bike when I have time to take it to the track.” Cohen swims and played softball for several years on a township team.

Their off-ice regimen doesn’t include ballet, although they take weekly ballroom dancing lessons with Charles Hoefgren. Roberts noted, “Lindsay is the ballerina. I have not taken any serious ballet instruction to this point. I have sometimes attended the off-ice ballet class that is offered at the skating rink, but I don’t usually have time because of conflicts with sessions when we have to skate.” Cohen began Russian classical ballet at the age of eight and progressed on to take pointe. She had three parts in the annual performances of “Nutcracker” with the Pennsylvania Ballet Company at the Academy of Music in Philadelphia.

Linichuk does most of the couple’s choreography although the other coaches join in with suggestions. “Occasionally we do some ourselves,” Roberts said, “starting this year in junior, mainly in character development and upper body movements and expression.” “Our steps are all done by our coaches but we add our own personality to our expression,” Cohen added.

“As soon as one season is over, Gary, Jerry, and Natalia start bringing in selections from many artists,” Roberts explained. “We take them home and sample them, and bring them back the next day with our opinion. When we find one we all agree, which sometimes isn’t easy, we take it and use it. Sometimes we just trust the coaches to know what will work for us.” “This year our music was picked by Jerry Santoferrara, Cohen noted. “Our original dance is from Chicago with rhythms of the fox-trot and Charleston. Our free dance is a mixture from the classical group, Bond and Sara Brightman.

Cohen said she would skate to “almost anything. I like to change it around every year. Last year we did South American rain forest music and this year we switched to updated classical.” “I personally like to skate to anything with a good solid beat that makes you want to dance,” Roberts said. “I am attracted to mostly the modern music. So far, I’m not a huge fan of the older classical music.”

Off ice, Cohen said, “I like a variety of music, even classical. My favorite bands at the moment are Maroon 5 and Yellowcard.” “I am a fan of all heavy rock music, like Linkin Park, Hoobastank, Story of the Year and similar stuff,” Roberts stated. “I play the guitar a little myself.”

They have a variety of other off ice interests. “When I’m not on the ice, I’m on my motorcycle,” Roberts said. “I am a huge fan of motorcross, and I play around with that a little when it’s not the competition skating season. I have to be careful of injuries. I also love just hanging out with Lindsay.” “I love relaxing in my pool, shopping and spending time with Evan,” Cohen said. Both skaters are fond of the Harry Potter books, but Roberts’ favorite author is Steven King. He’s also a big fan of Terry Pratchett’s Discworld books. Roberts likes action and horror flicks, and an occasional comedy, while Cohen prefers the comedies of Ben Stiller and Adam Sandler. He collects state quarters, while she collects stuffed frogs. “I have quite a collection from my friends,” she added. They also use their computers for email and chats but don’t have a website yet.

Both of the skaters love travel with their favorite trip so far being one to England and Scotland. “Traveling is fun,” Roberts said. “That is one thing I like about skating, you get to travel to new places. My favorite trip was with my family and Lindsay. We went to Great Britain and Scotland over New Year’s this year. My Dad is British and we got to spend time with his brothers and their families in addition to doing some sightseeing.” They would like to see Italy, in part so Cohen can visit her mother’s family.

Roberts attends Newark High School, where he is a junior. His favorite subjects are English and math. Cohen is also a junior at Archbishop Wood High School. “I love the sciences, especially biology,” she said. “I would love to be a veterinarian and on the side, coach some skating and perhaps even be in some skating shows. We have talked about both applying to University of Delaware so we can continue with our coaches here.” “I plan to go to university in the future,” Roberts said, “just as long as it doesn’t conflict with skating. I may start by taking some courses part-time while I am still competing. After I finish skating competitively, I think I am going to coach a little, maybe do some show skating.