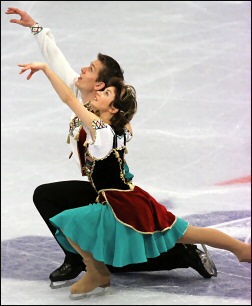 Alexandra Kauc thought she had a good chance of making it to the Olympics in 2002, especially after finishing 17th at Worlds in 2000 with former partner Filip Bernadowski. But the couple finished skating after the European Championships in 2001 and Kauc concentrated on her studies. Now she’s back in the sport after a two-year absence and hoping for better success with a new partner, 22-year-old Michal Zych.

The couple started training together in April 2003. “Michal called me last year after Europeans,” Kauc said. “The Polish Federation gave him a proposal to call me. I had been focusing on my school for the last two years since my last partner stopped.” Kauc had previously competed with Michael Przyk and Krysztof Tomaczyk before her success with Bernadowski.

They had good success in their first season together, winning the Polish dance championship and finishing 14th at Europeans and 24th at Worlds. “We were satisfied with our placement at Worlds,” Kauc said. “We had hoped for higher but we had a little success. In 2005, we hope to be a better team and be in the first 20 at Worlds.”

But they have had bad luck so far this season. Standing in second place after the original dance at the Nebelhorn Trophy in September, the couple had to withdraw after Kauc fell ill with food poisoning. Then at Skate America in October, the couple were in sixth after the compulsory dance. But they fell to tenth overall after a bad fall in the original dance when Zych’s blade hit a sequin on the ice. “Our dance was well skated,” Zych said. “We would have been much higher except for the fall.” They will next compete at the Cup of Russia.

“Our goal is to be in the 2006 Olympics,” Zych added. “That is the goal of all sportsmen. Our dream is to be in Torino.” It’s a dream they have been pursuing for a long time. Both skaters began the sport when they were five. Kauc first went skating because her best friend’s mother took both girls to the rink to play. She took to the sport immediately and competed for a few years in singles, but didn’t really enjoy it. “I didn’t like to jump and fall,” she said. “I preferred to show some skating.” When she was eleven, her coach asked her to try ice dancing, and she’s been a dancer since then.

“I started just for recreation, then later I started competing,” Zych said. “Everyone in my family does sports. My parents are very sportive. They are competitive kayakers.” He was a singles skater for seven years, but switched to ice dancing when he was 15. “I had problems with my spine and my doctor told me I would have to take a three year break from skating if I wanted to do jumps,” he explained. He reached second in Polish juniors with Agnieszka Szot, then looked for a partner for two years, skating in Belgium and the U.S. and working with Natalia Dubova for a short time in Connecticut.

Maria Olszewska-Lelonkiewicz coaches the dancers in Lodz, Poland. They train for two hours twice a day five days a week plus another hour and a half on Saturdays. In addition, they have two hours of off ice training including running, conditioning, ballet, classical, modern, and jazz dance classes. They also trained at the Detroit Skating Club for several weeks in the summer to work on their choreography and sometimes train in Moscow, Russia and Krynica, Poland.

Igor Shpilband and Marina Zueva choreographed the couple’s programs. “We liked his style,” Kauc said. “Igor has a special style with interesting choreography and good technique” Last season, Kauc and Zych used a cha cha, rhumba and samba by Ricky Martin for the free dance. “We wanted the program to be light, that the public would like. We are a fresh couple so we didn’t want to choose difficult music. And I feel good doing Latin music.” “I like modern music,” Zych said, “I like every style of music. It depends on my mood. We’d like to have modern music for our free dance one year. Something different from the rest.”

For 2004-2005, the couple are using a medley of music by Goran Bregovic for the free dance. “I can’t remember the exact names of the music,” said Shpilband. “I really like Bregovic’s music and have twelve of his albums on my iPod.” Their original dance includes a slow foxtrot to Steppin’ Out With My Baby and a quickstep to Too Hot to Hold. “I like our original dance so much,” said Kauc. “We’ve received good notes from the judges on it.”

Off ice, Kauc listens to pop, soul and jazz music. “It depends on my mood and whether the music is good or not,” she said. “I like any kind of modern music — reggae, rock and club music,” Zych said, “and I like to listen to the guitar.”

Both skaters enjoy going out with friends and watching movies. “It’s a good means of relaxing when you’re in the cinema,” Kauc said. Zych also enjoys sitting in front of the computer and surfing the Internet. “I’m interested in all kinds of electronics and computers,” he said. For other sports, he likes to ride his bike and she skis. Kauc also loves all kinds of dancing. “I could not live without dancing,” she laughed. She also enjoys reading biographies and detective stories or just resting at home, listening to music. He also likes to take photos of historic buildings and nature. Neither of the skaters has any collections. Kauc said she keeps some of the stuffed toys that she receives, while she gives others to her sister’s children or to her dog, Mimi, to play with.

In addition to skating, Kauc is in her fifth year of university studies in physical education, with less than a year until completion. Zych has graduated from high school and is planning to study either physical education or psychology at the university. He is considering getting a master’s degree in sports psychology, a field with few practitioners in Poland. One of his goals is to speak English as well as his partner.

As for travel, Kauc most enjoyed her trip to Junior Worlds in Brisbane, Australia. “I loved the exotic atmosphere and all the strange animals like kangaroos. And I visited my aunt in Melbourne.” Among the places she hopes to visit one day are Hawaii and South Africa. Zych likes to relax by the Polish seaside where he comes from. He also enjoys the mountains. “I haven’t been to too many beautiful places,” he said. “I’m interested in other cultures and would like to visit other cultures and landscapes if possible in the future.”