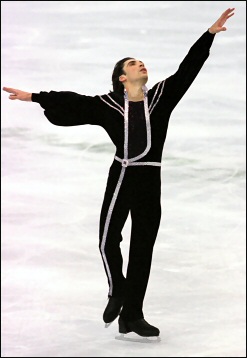 Israel's Roman Serov returned to the figure skating international scene this season after a two-year absence from major ISU competitions.

Israel’s Roman Serov returned to the figure skating international scene this season after a two-year absence from major ISU competitions. Serov, a 27-year-old who was born in Moscow, competed for Russia for many years, finishing in the top six at Russian Nationals between 1999 and 2002. But then he fell in love and married Israeli skater Rachel Lior in August 2002. Since Lior had dual Israeli-U.S. citizenship, Serov elected to skate for Israel, but he had to sit out the last two seasons because of switching countries. “In Russia, there were too many good skaters and I never got to go to Europeans or Worlds or many Grand Prixs,” he said. “I definitely want to go to the 2006 Olympics, but after that, we’ll see.”

Last season, Serov won the Israeli Nationals and Skater Israel and took the bronze at the Golden Spin of Zagreb. He started 2004 by finishing second at the Finlandia Trophy, then scoring a surprising fourth place at the first ISU Grand Prix event, Skate America, in Pittsburgh, Pennsylvania. Serov finished third in the short with the only clean program, completing a triple lutz, triple Axel and triple flip-triple toe loop combination. He landed seven triples in the long program, including a triple Axel-triple toe loop combination to finish fourth overall. “I tried to do my best and not think of a place,” he said. “I just wanted to skate like in practice.”

Serov is currently working on the quadruple toeloop and loop. “I have landed both of these jumps,” he said. “Skating isn’t only about jumping anymore though, with the new scoring system. I am not young for figure skating, but I plan to keep on going as long as my body allows me to.”

“I already had a clean skate at Finlandia,” he continued. “I was familiar with the new system. I like it because before it was jump, jump, jump. Now you have to think about spins and other elements. Now the spins and steps are much more important. I am not a very creative spinner, so I am working hard on some new spins to add into my programs. I think that with some good spins I can easily score a new personal best.”

“I began skating when I was five,” Serov said. “My mother brought me to the rink because she liked figure skating. She was a runner, not a skater. I wanted to be a hockey player but I became used to skating and now I cannot live without it. By the time I was 12 or 13, I had my first triple toe loop. When I was 19 or 20, I learned the quad toe loop. I have landed the quad loop, but it’s too difficult a jump so I don’t have it in competition, just the quad toe.”

After moving to the United States, Serov began training with Craig Maurizi in Hackensack, New Jersey. “He guides me in the right direction and is a good motivator,” said Serov. “He works very hard with me, and expects nothing but the best. I think since I have started working with him, I have improved many aspects of my skating.”

Maurizi feels that working with Serov has been much easier than he had earlier anticipated. “When you start working with a skater that has already accomplished so much prior to a particular coaching change, the coach may have certain challenges in getting the skater to try things that are different than what the skater has been used to for years,” he said. “Roman is an extremely coachable skater which is rare for someone of his level. We work together as a team very well.”

During the summer, he also works with Viktor Kudriatsev in Flims, Switzerland. “I only train for about two hours a day,” Serov said, “five or six days a week. Then I coach a couple of lessons a day to pay for it.”

Tatiana Druchinina, wife of Olympic pairs champion Artur Dmitriev, choreographed his programs for last season. The short is to a selection of classical music, while the long is to Beethoven’s Last Night by the Trans-Siberian Orchestra. “Normally I change the programs every year,” he said, “but am keeping the short this season because I did not compete very much last year. I am also using last year’s long until my new one is ready. Peter Tchernyshev is choreographing my new one.”

“My coach, Craig, has some young students who are working with Peter,” said Serov. “We both really admire his work as a choreographer and decided we should do the long program with him.” “According to Roman,” added Maurizi, “he has mostly skated to one type of music over his career with one style of choreography.”

Maurizi continued, “I thought it was very important to change his look for the upcoming European and World Championships. He has been off the scene for almost three years and must come back different and better to regain the ground he has lost by not competing.” Maurizi has known Tchernyshev for many years and admires his brilliant choreography. “I feel that Peter gives passion and uniqueness to Serov’s new program. This was a perfect match for Roman’s new look!”

Serov admitted to being skeptical at first to Tchernyshev’s choice of music. “It’s the type of music that you hear in a club,” he said, “but the energy when you turn on the music though is amazing! Hopefully it will add something good to my skating. Peter and I spent endless hours in the music studio getting just the right cut. It’s finally ready for it’s debut.”

Serov, who enjoys working with Tchernyshev, offered, “We are both young and we get along well and seem to understand each other on the ice. Peter is teaching me new moves for my new long program that for me are hard to execute right now, but I believe it they will work well with the new judging system.”

Serov chose music by The Scorpions for his exhibition program. “It’s not really ready yet, so I have to make some improvisations when I skate.” However, Serov’s wife Rachel played Love by Nat King Cole for him, thinking that it might be the perfect exhibition number. “I can really see myself skating to it,” said Serov. It is a classic song, and I think it really suits my style of skating. So we might use that.”

Away from the rink, he said,” I mainly listen to Russian music. I also play tennis a lot. I don’t collect anything now but I used to collect coins and stamps. I have a computer but just use it for news and to play games. Mostly I stay at home with my wife and our two dogs. They eat all the toys. When we have people come, we play soccer or basketball and sometimes at the end of the week, I play some hockey. Sometimes we go to movies and Broadway shows.”