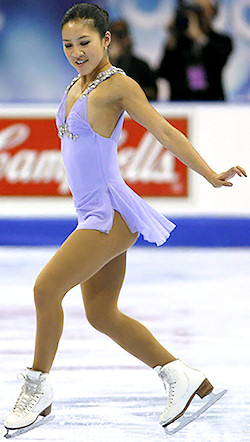 Since 1993, Michelle Kwan has been a constant presence on the podium of almost every major national and international figure skating competition. As Kwan prepares to attempt to win her eighth consecutive and ninth overall title at the upcoming 2005 State Farm United States Figure Skating Championships in Portland, Oregon, she knows why she is still competing. “I don’t know when it is enough,” said the 24-year-old. “I mean, I still enjoy it. I’m the luckiest girl alive that I get to perform in front of thousands of people, do what I love doing and skate to beautiful music dressed in Vera Wang.” The two-time Olympian continued, “The list goes on and on. It’s going to be hard for me to just walk out of the ice rink and say ‘I’m gone, I’m ready to move on with my life’.”

Despite varying formats and scoring systems over the years, Kwan has still remained at the top of her game. But as the 2005 World Championships loom, the reigning world bronze medalist may have to face her most difficult test in the new scoring system that the International Skating Union has adopted. Though the 2005 State Farm Figure Skating Championships will utilize the traditional “6.0” scale, the World Championships will use the new “Code of Points,” which rewards difficult spins, transitions, and jump combinations. Kwan has yet to compete under the Code of Points, but has studied what has scored well and what has not. “It’s not that big of a difference,” she stated, saying that her footwork and certain moves would stay the same.

However, while Kwan views her programs as ‘works in progress’ when factoring in the new scoring system, she is insistent that her skating is on her own terms. “I have to make sure that I’m keeping the artistic integrity of my own skating and not being pushed in a certain direction, a certain way,” she said, adding quickly, “But I also need to follow the rules and get to a level 3 and try to win.”

To remain near the upper stratosphere of elite skating, Kwan has had to stay healthy and focused. In her 13 years on the championship level, Kwan has not missed a national or World championship on the senior circuit. Her secret? “I’m lazy!” Kwan quipped. “… I think that knowing what your limitation is, being smart about your body and listening to your body is important, as well as pushing yourself.”

This season promises to be one of Kwan’s most intriguing, as she has enlisted the expertise of 1984 Olympic Ice Dance Champion, Christopher Dean, to choreograph her free skate to Ravel’s Bolero. This piece of music is what many consider to be the anthem of Dean and former teammate Jayne Torvill’s illustrious career. Though Kwan has worked with Dean in the past (he choreographed her short program for the 2000-01 season), she was just as excited to join forces with him once again. “The creative process with Christopher was amazing. Just to watch him skate, he is so amazing the way he moves,” remarked Kwan. “When he choreographs, he moves – it’s like permission to see history at work.” For her short program, Kwan has selected to skate to Adagio from Spartacus, choreographed by Nikolai Morozov.

Kwan, who trains in California with coach Rafael Artunian, has a new training partner – the 2004 Four Continents Cup Champion, Jeffrey Buttle. She appreciates having Buttle in Artunian’s camp stating, “It’s nice to be able to have an international skater push you. We do run-throughs, applaud for one another, and cheer each other on. It’s great to have that sort of atmosphere in an ice rink.”

Kwan’s main competition for the US title will come from reigning US and World silver medalist Sasha Cohen, 2002 Four Continents Cup champion Jennifer Kirk, and current Skate America gold medalist Angela Nikodinov. Cohen, who withdrew from the ISU Grand Prix Series this season citing injury, has been inconsistent this season, falling three times and finishing third behind Kwan and Irina Slutskaya at the Marshalls World Cup of Figure Skating in December. Kirk, who also sat out part of the Grand Prix Series due to injury, finished fourth. Nikodinov is getting back into the form that saw her land on the podium at the national championships twice, but has struggled with putting two solid performances together in one competition. A bumper crop of up-and-comers including Kimmie Meissner, Jane Bugaeva, and Alissa Czisney also shows promise to earn medals on the national level.

With the Nationals less than a week away, the only question that Kwan has yet to answer is whether she will attempt to qualify for her third Olympic team in 2006. Is that elusive gold medal tempting enough to continue to push through the rigors of training for competition? That remains to be seen. “I do think about the Olympics,” Kwan teases, “but I’m also taking things one day at a time. There’s nationals, hopefully to Worlds and then go on from there.”