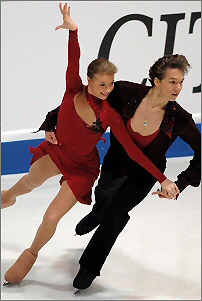 Ekaterina Bobrova and Dmitri Soloviev of Russia perform the Silver Samba for the Compulsory Dance.

The 2007 ISU World Junior Figure Skating Championships, which is taking place Feb 27 – Mar 4 in Oberstdorf, Germany, kicked off with the Compulsory Dance.

In 2000, Oberstdorf set an ISU World Junior Championship record for figure skating (which still stands) for the most skaters (201) participating. Even for Senior Worlds, this number has only been beaten twice: 2001 Vancouver, Canada – 212 skaters and 1994 Chiba, Japan – 211 skaters.

By competing at Junior Worlds, the athletes will be earning points toward the World Standings for the 2006-07 season.

Approximately 184 skaters are competing for prize money, with those who place first through 12th divvying up monies totaling $200,000. In addition, the top three skaters and couples per discipline having earned the most World Standing points during the 2006-07 season will be awarded with a World Standings Bonus totaling $450,000 US Dollars.

The Compulsory Dance (CD) for the event was the Silver Samba. The dance, which was invented by Courtney J. L. Jones and Peri V. Horne, was first performed in 1963 at the Queen’s Ice Rink in London, England.

After picking up some stray threads from the feather boa of Elodie Brouiller’s (FRA) skirt, Ekaterina Bobrova and Dmitri Soloviev of Russia took command of the ice, striking a dramatic pose to open their dance. The team skated a large pattern that filled the rink like few other teams could. It was a powerful and technically superb performance skated with flair and expression that drew in the audience, and which earned them a new personal best of 35.52 points for a first place finish.

“It’s a nice feeling,” said Bobrova of their placement, “but the competition isn’t over yet. The Samba is our favorite compulsory dance because it is fun and entertaining. We really enjoy it.”

The team was not aware of how the other competitors skated and/or the mistakes that were made.

“We came here and were focused on ourselves,” stated Bobrova. “We got a new personal best,” added Soloviev, “which is really pleasant for us. The music is so joyful and we like it a lot.”

Estonia’s Grethe Grünberg and Kristian Rand displayed joyful expression in their CD in which their seemingly effortless speed was unmatched by any of the other teams. Their upper body movement was also accented by the string fringes on the bodice of Grünberg’s bright orange dress, and the team was awarded a new personal best of 32.42, placing second behind the Russians.

“It was very good,” said Grünberg, “one of our best performances [of this dance] ever.”

Grünberg stated that they had been training hard, and therefore, it wasn’t a big surprise to them when they learned of their placement.

“The senior free dance is actually easier,” added Rand, “because there is more time to rest in between the elements [as it is one minute longer].”

Skating second didn’t appear to bother Russia’s Kristina Gorshkova and Vitali Butikov as they set the standard by displaying a dance that expressed the fun of the Samba with lovely matching lines and excellent speed. The team placed a close third behind the Estonians with 31.35 points.

“We didn’t expect this result,” admitted Butikov. “We skated early, second, and usually the judges are holding back with the marks to leave room for the other competitors.”

However, Butikov still felt that they could do a lot better.

“It was ‘OK’ for the competition,” he said, “but in practice, it’s smooth. Of course, the nervousness in competition is a factor. We [realize] that this is Junior worlds, but we try not to think too much about it and pretend that it’s like a Junior Grand Prix [event] or the Junior Grand Prix Final.”

USA’s Emily Samuelson and Evan Bates did an excellent job on the first pattern of their CD, skating in close positions and utilizing the full surface of the ice. Unfortunately, they got off track with each other at the start of the second segment of the second pattern when Samuelson’s free foot kicked her partner’s skating foot out from underneath him. Bates recovered quickly without falling, and the team continued without losing their great expression. They were fourth with 31.18 points.

“We were skating really well,” explained Bates of the mistake, “but in the corner all of a sudden I was on my right foot instead of my left foot. It was unfortunate, but it’s better to have a mistake in the compulsory and to skate well in the OD and Free Dance. Hopefully we’ll be able to do that.”

“We’re just looking at it as just another competition,” added Samuelson when asked how it felt going into this competition after a successful season so far. “Our goal here is, as always, to skate our best and to have the audience and judges enjoy our performances. I felt we accomplished that even with the small mistake.”

Russia’s Maria Monko and Ilia Tkachenko displayed very good speed and flow in their CD, skating with expression and a closeness that was matched by few other teams. They placed fifth with 31.12 points.

Kaitlyn Weaver and Andrew Poje of Canada skated with a unison and matching lines that belies the newness of their partnership. Aside from the forward steps on the short end of the rink, their expression of the samba was excellent, and the team placed sixth with a new personal best of 30.43 points.

“This dance (silver samba) is actually a challenge for us as the steps are so quick and you need to be so precise,” admitted Weaver. “However, we try to show our personality with every dance. It was hard for us to train, but it definitely paid off. The event really went smoothly for us and we hope to keep improving our performances.”

Poje agreed, adding: “Our performance was good, especially as we did not have a lot of time to train since nationals. So everything was a bit of a rush. It was exactly what we wanted to do. We just went out and did what we could.”

USA’s Madison Hubbell and Keiffer Hubbell, one of the favorites coming into the competition, had an excellent start in their CD which displayed exceptional matching lines and expression. Unfortunately however, Madison, who caught a blade in the ice while skating backwards, fell during the second segment of the first sequence, taking her partner with her. The team recovered fairly quickly, but their expression for the rest of the dance was somewhat subdued.

“It was an all right recovery,” said Madison of the fall. “It really takes you by surprise because it doesn’t happen that often – especially in compulsories.”

“We fell,” said Keiffer. “Mistakes like that happen. There was nothing with wrong with the ice. Hopefully we will skate better in the other events. The competition is not over. It is all about the way we skate, and where we end up is not in our hands.”

The event continues Wednesday with the Men’s Short Program and the Pairs’ Free Skate. The Original Dance will take place on Thursday.