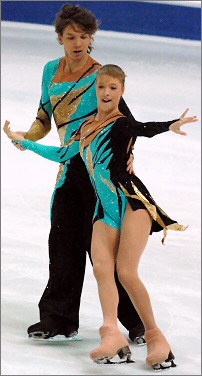 Grethe Grünberg and Kristian Rand of Estonia won the silver, making history by becoming the first Estonian figure skaters to ever medal at an ISU Championship.

In their first season together as a team, Canadians Kaitlyn Weaver and Andrew Poje captured the bronze.

Couples are permitted to do either synchronized twizzles or a spin in the Free Dance (FD). If a team elects to do both elements in their FD, the spin is counted as a transitional move and no points are awarded in the technical score. It will however, be taken into account in the transitions mark of the component score.

USA’s Emily Samuelson (16) and Evan Bates (18), who stood in second coming into the FD, had to withdraw.

Approximately one minute into their FD, Samuelson fell and Bates stumbled over her during the circular footwork sequence, stepping on her left hand with his blade. Due to the cut, the 2007 US Junior Champions were unable to finish the performance.

“She suffered a laceration to the middle finger tendon of the left hand,” said US Team Doctor Dr. Craig Westin. “It was repaired completely today by Professor Hermann Krimmer. We expect a complete recovery.”

All of the skaters were concerned and wished Samuelson a speedy recovery.

“We are very, very sorry for them and we hope that they will recover very quickly,” said Soloviev, adding that they wanted to compete against them next season.

“We wish her a speed recovery and hope that she doesn’t go through anymore pain and our hopes are that she can recover very quickly,” said Weaver.

Performing a dynamic fast-paced dance to Armenian Rhapsody, Bobrova (16) and Soloviev (17) executed three unique lifts, all of which received a level 4 with +GOEs from the judges. Their level 4 synchronized twizzles were fast and both their level three diagonal and circular footwork sequences interpreted the music well, building in momentum as the music swelled. The only flaw in the program came towards the end of the circular steps when Bobrova fell out of a twizzle.

“We are obviously pleased with the result and we are happy with how we skated in the OD and CD,” said Soloviev. “In the FD unfortunately, there were a few mistakes and this is something we will work on. We hope to continue improving and we want to beat our personal best in each segment of the competition next time.”

Weaver and Poje, who stood in fourth after the OD, placed second in the OD with a new substantial personal best of 67.58. With a total of 151.51 points, the Canadians finished third overall to win the bronze.

The team opened their routine to One Fine Day from “Madame Butterfly” with dramatic choreography which quickly moved into fast sweeping curves that flowed from one to another. The pattern of curves continued in a beautiful level 4 serpentine lift, and their level three circular footwork showed lovely matching leg lines.

The 2007 Canadian bronze medalists also produced level four curve lift with Poje in a spiral position. The team’s level three midline step sequence was accented with deep edges, curves and matching body lines. Weaver showed no sign of the injury sustained yesterday as they concluded the program with a level 4 one-armed rotational lift.

Weaver dislocated her left shoulder during a warm-up prior to the OD the previous day, and a doctor had to pop it back in place. It’s the same arm she uses to hang onto her partner during a fast rotational lift at the end of their program.

“Last night it didn’t really hurt during the OD because I had adrenaline running and I didn’t really think about it,” said Weaver regarding her shoulder. “But this morning it was a little bit more painful. I underwent treatment with the Canadian doctor using some acupuncture and massage, so it felt much better tonight. I was able to do the free dance without thinking about it.”

Weaver felt they skated very well and was happy with achieving a new personal best.

“We went out there and did what we set out to do,” he said. “We didn’t make any major mistakes. We skated like we could and it paid off.”

Leading off the final flight, Grünberg (18) and Rand (19) performed a flawless flowing waltz to Emmerich Kalman’s Silva which exuded romance and joy. The 2006 JGP Spin of Norway Champion began with a level 4 straight line lift, followed by a level 4 circular step sequence in which the audience clapped along.

The Estonian Champions continued with a level 4 one-arm rotational lift with Grünberg in a lovely position, followed by a combination lift which transitioned seamlessly from a level 4 straight line lift into a level 3 rotational lift. The team also produced a level 3 diagonal step sequence and a level four dance spin, earning a new personal best of 72.02 points for a third place finish in the FD.

With a total of 154.89 points, the team placed second overall to win the silver.

“We skated today very well our free dance,” said Grünberg. “It was clean and it felt very good. So we got our personal best again, the third in this competition.”

Rand was happy and seemed relieved that the competition was over.

USA’s Madison Hubbell (16) and Keiffer Hubbell (18) stood in ninth going into the FD. The 2007 US Junior silver medalists continued their rebound from the fall in the CD, placing fourth with 70.03 points, and with a total score of 145.24, moved up to sixth place overall.

The brother-sister team produced a smooth and expressive dance to Canto Alla Vita by Josh Groban, which was highlighted by close holds and matching lines. Their level four serpentine step sequence, which interpreted the music beautifully, was the only serpentine sequence of the competition. The 2006-07 JGP Champions received a level 4 on all elements except for the midline step sequence, which was given a level 3.

Russia’s Kristina Gorshkova (18) and Vitali Butikov (19), who stood in fifth after the OD, placed fifth in the long, and were fourth overall with 146.84 points.

The 2006 JGP Mirecurea Ciuc Champions performed their FD to Mozart’s Eine Kleine Nachtmusik (A Little Light Night Music). The name says it all. This light, playful dance was a joy to watch. Following their opening level 4 curve lift, the 2007 Russian Junior bronze medalists displayed a set of perfectly matching level 4 twizzles, followed by a level 4 straight line lift. The team also produced a good level 3 diagonal step sequence which showed close holds and reflected the mood of the music. The Russians were the only couple to do a rotational lift that included a change of direction of the rotation.

Teammates Maria Monko (16) and Ilia Tkachenko (20), who were eighth after the OD, placed sixth in the FD and fifth overall.

The 2007 Russian Junior silver medalists skated a dramatic program to Romeo and Juliet, opening with a fast level 4 one-arm rotational lift, followed by a level 3 circular step sequence which moved with speed and flow. Though the team earned a level 4 on the other lifts, their diagonal step sequence, which reflected the dramatic nature of the music, was only graded a level 2.