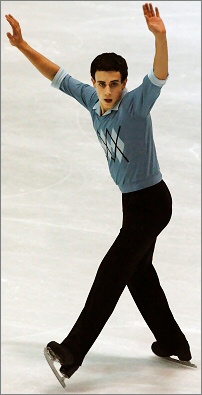 USA's Stephen Carriere catapulted from sixth place after the short, to first overall to win the gold.

USA’s Stephen Carriere catapulted from sixth place after the short to first place overall to clinch the gold.

Initially, there were 45 skaters which were divided into two groups and a draw was made according to the ISU World Standings, and the top 24 skaters from the short program advanced to the Free Program.

“At the start of the performance, my triple Axel was a little too big for my liking,” confessed Carriere. “I have been able to do it more controlled, but I made sure that I came out of that strongly. The rest of the elements just flowed as I was able to easily do them. That was the program I have been searching for this year.”

“This title means a lot,” said Carriere. “After being in fourth place last year, it was my goal to do better this year.”

Carriere admits to having a reputation for being inconsistent in the short program.

“This year was the same,” he conceded. “Beforehand, I knew that I could put the short program aside, clear my head, and do my program. I never really think about the placement – only about my performance. I remember waking up today, saying, ‘it’s a new day’ and to walk through that open door.”

“It was really intense backstage,” said Carriere, who skated early in the final group. “I was watching the TV. After each skater went up, and I saw that I was still in first, it was really exciting. I was thinking that maybe I could win. I just stayed calm and didn’t want to get over-excited.”

Skating last in the third warm-up group, teammate Brandon Mroz chose the familiar music of Malaguena performed by Stan Kenton. His program was filled with transitions and he drew the audience in with him.

As his error-free program progressed, you could feel the crowd jumping along with Mroz as they cheered each jump which was landed with soft knees. Five of the eight triple jumps were completed after the two-minute mark for which the 2007 US Junior silver medalist received bonus points, and three of his spins were graded level 4.

The 16-year-old, who stood in seventh after the short, placed second in the long with a new personal best of 121.19, rising to fourth overall with a total score of 178.40 points.

“This was by far the best of the year,” said Mroz. “These were my first Junior Worlds and I peaked at the right time. It was a great skate for me and I am really proud of myself.”

Mroz felt he learned a lot at this event, including dealing with his nerves.

“In the short, I was a little more nervous and uptight and in the long I was much more relaxed and really into myself,” he said. “I definitely learned how to train a bit better like all the other guys.”

Mroz said his next goal will be the triple Axel.

“I want to take my program to a new level and the triple Axel will help me do that,” he said. “I also want to learn the quad – maybe not yet for the program, but I surely want to learn it.”

Voronov, who stood in fifth after the short, placed third in the long with a new personal best of 121.19, and with a total of 178.40, placed third overall to capture the bronze.

The 2007 Russian Junior Champion skated his routine to music from the Pearl Harbor soundtrack, and with both it’s softer melodic music and driving beat, showed his ability to interpret different styles of music.

Unfortunately, his opening quadruple toe loop was downgraded to a triple after he stumbled out of the landing. Although they weren’t perfect, Voronov then landed a triple Axel and triple flip, followed by footwork which interpreted the music well. The current Junior World silver medalist also produced five more triple jumps which included a high and beautiful triple Axel-double toe loop combination.

“I’m thinking positively of my performance,” said Voronov. “The quad toe didn’t work out, but it is something I will work on in the future. Of course, as an athlete you always want to win, but the bronze medal is not a bad result.”

The19-year-old went on to say that the level at this event was much higher than last year.

“Many skaters had cleaner performances,” said Voronov. “I was second last year and I didn’t want to finish lower, at least not off the podium.”

Using his whole body, Chan’s level three circular footwork flowed with the music, but then he fell on a triple Lutz. The 16-year-old quickly recovered to land three more triple jumps, but the last one – a triple toe loop – was a bit pitched forward. Nevertheless, he excited the crowd with his level three straight line footwork and level four combination spin which concluded the program.

“I have never felt better doing my straight line footwork sequence,” said Chan. “Hearing the crowd clapping and getting me to the end of the program; I have never felt so good in the whole season.”

However, the mistakes proved costly. Chan placed fourth in the long, slipping to second place overall with 184.55 points.

“I think my performance was still very good,” he offered. “There are obviously some minor mistakes that I wish I could have fixed, but there were more good than bad things in the program. There is not any disappointment in this whole program or competition.”

Chan said he’d never been in such a high position after a short program in an international competition.

“It definitely was an experience,” he said. “I learned a lot from it. I was more nervous than usual. I came out with the silver medal, so I am not complaining.”

Teammate Kevin Reynolds landed seven triples in his technically difficult program to Let’s Dance, Harlem Nodvie, and We’ll Get It, but two-footed his opening quadruple Salchow and fell on a quadruple toe loop. The 2006-07 JGP Final bronze medalist slipped from fourth to fifth overall with a total of 178.32 points.

Jinlin Guan of China, who stood in second after the short, skated to music from The Mission soundtrack. The 17-year-old completed seven triple jumps, however, only one was in combination while another was in a sequence. He also singled an Axel, leaving too many points “on the table,” placing sixth in the long. With a total of 177.97 points, the 2006 JGP Spin of Norway silver medalist slipped to sixth overall.

The competition continued Friday with the Ladies Short Program and the Free Dance.