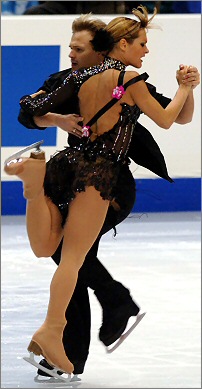 Albena Denkova and Maxim Staviski of Bulgaria are currently in first after the Original Dance at the 2007 World Figure Skating Championships.

The OD for the 2006-07 season is the “Tango” in which couples can choose one to three tango rhythms. If two rhythms are used, one can be repeated. Vocals are permitted.

Albena Denkova and Maxim Staviski of Bulgaria are currently first after the OD with 99.52 points, followed by Marie-France Dubreuil and Patrice Lauzon of Canada (99.50 points) and USA’s Tanith Belbin and Benjamin Agosto (99.02 points).

Less than two points currently separate the couples that are first through fourth after the OD.

Holding nothing back, Denkova (32) and Staviski (29) showed a fast and exciting dance to Libertango by Piazzolla. Their opening moves exuded a passionate sultriness which began with a midline step sequence with twizzles in perfect synchronization. The diagonal step sequence flowed and curved with close holds and they ended the program with a fast one-arm rotational lift.

The only element which didn’t receive a level 4 was the spin. The Bulgarians’ superb skating skills were awarded the highest component scores of the night (30.07) as well as first place in the OD with 62.10 points, moving them into first overall (99.52 points) by 0.02 points.

“We are happy because we skated well,” said Staviski. “We did all we wanted to do.”

“We changed our music after the European championships,” explained Denkova. “It is still the same piece, but it is played by a violin player, Vasilev. He played it especially for us during a show, and we felt really wonderful with this music that we decided to take if for the world championships. Obviously it brought us luck!”

“People say ‘skate like it’s your last competition’,” added Staviski of going into the Free Dance. “For us it is actually our last competition, so we don’t need to pretend. We’re just skating for ourselves and the public. We just want to dance!”

Belbin (22) and Agosto (25) skated a smooth and flowing dance to Concierto para Quinteto and Oblivion. Though technically excellent, it lacked somewhat in passion and romance. Entering the midline step sequence, Belbin’s blade hit the boards on the end of the rink. In spite of this, their midline twizzles and steps were excellent with the first twizzles rotating very fast.

The US Champions also produced two difficult lifts, an excellent dance spin, and a diagonal step sequence which flowed quickly with the music. The team received a level 4 on all elements, earning 61.85 points for a second place finish in the OD and third overall with a total of 99.02 points.

“Running into the boards wasn’t actually part of our choreography,” joked Belbin. “I was distracted the rest of the program because of that incident and less sure of myself because it was so unexpected. But overall we didn’t make any other major mistakes.”

“She recovered really quickly,” said Agosto of his partner touching the boards. “I’m always impressed how she recovers when she has to, and I felt like the rest of the program was strong. We’ve been trying to work on connecting with each other and looking at each other a bit more and expressing that passion between two people in the tango. I think we did a pretty good job at that today.”

“Our goal for the free dance is to skate clean. Usually we do not focus on [placements and scores], we just focus on our performance,” said Belbin. “It seems like in this competition you cannot give away any points on silly mistakes, so we are going to concentrate element by element and try to create a strong performance effect by executing each element clean.”

“We’ve have been playing around with costumes all season,” added Belbin. “And when I dyed my hair darker, we thought that the red (of the new costume) would stand out better.”

Showing both the fiery passion and soft romance of the tango, Dubreuil (32) and Lauzon (31) skated to Paya d’Ora with eyes only for each other. The music started with a slow beat and they used every nuance of it to set the mood before it picked up and they moved into the midline step sequence which was done with nearly excellent synchronization.

Their diagonal steps start out flowing and romantic with the music and become passionately staccato as the music changed. Known for their innovative lifts, the Canadian Champions ended the program with a rotational lift with Dubreuil vertical to the ice supported only by Lauzon’s outstretched arm.

The current world silver medalist received a level four on all elements, placing third in the OD with 50.54 points and second overall with 99.50 points.

“It was pretty good,” said Dubreuil. “Probably the best of the season. We love the tango. We even look Spanish so it’s easy to put the feeling and expression into the moves.”

“They are great and very respectful,” Dubreuil responded when asked about the Japanese crowd. “They are not noisy when we need to concentrate and they cheer when we want them to.”

Component marks second only to the leaders helped Russia’s Oksana Domnina (22) and Maxim Shabalin (25) overcome the lower difficulty of their dance to a Piazzolla tango.

Starting with a level 4 midline step sequence that curved back and forth across the center line of the ice, the team displayed matching level 4 twizzles in nice synchronization. Their lift with Shabalin in a lunge and Domnina leaning out to the side was also graded level 4, while the spin and diagonal step sequence were graded a level 3. The team closed their program with a fast level 4 rotational lift with Domnina in a catchfoot position.

The Russian Champions placed fourth in the OD with a new personal best of 60.34 points and are currently fourth overall with 97.63 points.

“I’d say it was the best original dance all season,” offered Domnina.

“Technically and emotionally it was very balanced,” added Shabalin. “We expressed the character of the dance very well. We got a personal best, still lost a placement, but this is not a question for us.”

Isabelle Delobel (28) and Olivier Schoenfelder (29) of France delivered an intense dance to Tango Volver which featured a midline step sequence with an unusual free foot position – crossing their free foot behind the skating foot at the ankle in the first set of twizzles. The straight line lift had Schoenfelder in a low position with Delobel supported on his knees extended out in front of him horizontal to the ice. The diagonal steps were complex in very close holds and in a departure from the norm for this competition, their second lift was a curve lift.

The European Champions received a deduction for an extended lift, but were also awarded a level 4 for all elements. They placed fifth in the OD with 58.82 points and are fifth overall with 96.02 points.

“Today’s performance was not at the level of our training,” said Delobel. “Even with all level 4s, we could have skated much better. There were many very small errors and a deduction for a lift that was too long.”

“Coming to worlds, we felt that the top five couples were all very strong,” added Schoenfelder. “This is a very tight competition. It’s so close, the smallest of errors can play a large role. If the others skate well in the free dance, it will be very difficult for us. We must skate perfectly tomorrow to catch up.”

Association Tango provided the music for a precise and dramatic dance skated with good flow and edges by Canada’s Tessa Virtue (17) and Scott Moir (19).

The spin was the opening element in this dance with a lovely “Y” ending position by Virtue. The beat of the music picked up as they entered the midline step sequence and twizzles which had excellent sync. They too, used a spread eagle for Moir’s position in the lift while Virtue changed positions to a swan dive one. Complex diagonal steps were performed in very close holds and they closed the program with a rotational lift in which Virtue is upside down.

The Canadian silver medalists, which earned a level 4 for all elements, placed sixth in the OD with 57.11 points, and currently sit in seventh overall (88.56 points).

“We were really solid out there and felt comfortable since we were really prepared for it,” said Virtue. “We are just very glad to be here on the ice with these great skaters.”

“We’re very happy with our performance,” he added. “We are really here for the great experience and we love ‘tango-ing’. We like any rhythm, but the tango is one that we have been especially successful with.”

Russia’s Jana Khokhlova (21) and Sergei Novitski (25) showed innovative positions and moves in their Tango Jalousie by Jacob Gade which was skated fast but with drama.

Their dance was highlighted by their level 4 midline sequence with matching twizzles and innovative lifts. With the exception of a very good level 3 diagonal step sequence, all elements received a level 4 and the team placed seventh with a new personal best of 55.88 points. They currently sit in sixth place overall with (89.20 points).

“Today we had a special mindset going into [the OD],” said Khokhlova, ‘because it is the last original dance of the season. So we wanted to show the very best, I think that’s what we did – emotion-wise and performance-wise. I’m very pleased.”

“We achieved a new personal best at the world championship and that speaks for itself,” added Novitski. “The competition within our group is tough, and we’re not for the first time in this situation. We try to grow as skaters and to improve.”

The US bronze medalists produced a difficult dance which arguably had the fastest twizzles of the competition. The team also displayed good flow throughout their romantic tango to A Los Arrigos by Piazzolla, earning a level 4 for all elements.

“We really like this program,” said Davis. “We danced really well. We worked really hard for it and we are very happy!”

“Definitely this is the personal best,” he said. “We would like to celebrate.”

Federica Faiella (26) and Massimo Scali (27) of Italy are currently in ninth overall with 86.61 points. The Italian Champions showed good expression in their tango, however they appeared cautious and slow. An error by Faiella during a twizzle sequence resulted in a level 2.

“I don’t know what happened to my twizzles,” said Faiella. “I felt good about skating the last, and other than the mistake, everything went well. Tomorrow is another day.”

“We changed the music after Europeans because we need slow parts for steps,” explained Scali. “I really like the music. We lost lots of points for the little mistake, but I was comfortable and we did well getting level 4 on the other elements. Our free skating music is very powerful and I think people will love it.”

USA’s Melissa Gregory (25) and Denis Petukhov (28) produced a strong dance which had good unison, speed and flow, earning level 4 for all elements. The team currently sits in tenth place with 83.98 points.

“I think it was very strong and we’re happy with it,” said Gregory. “Both our original and free dances are our favorite yet.”

“It was very solid and it was good,” agreed Petukhov. “I’m satisfied. There are some very innovative moves in this original dance and I’m very happy about the outcome.”