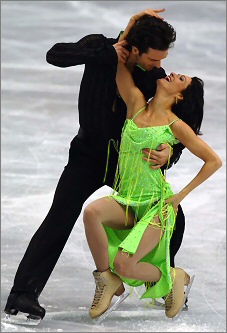 Marie-France Dubreuil and Patrice Lauzon of Canada perform the Rhumba in the Compulsory Dance.

The 2007 ISU World Figure Skating Championships, which is taking place Mar 20-25 in Tokyo, Japan, kicked off with the Compulsory Dance.

Approximately 189 skaters from 46 countries are competing for prize money, with those who place first through 12th divvying up monies totaling $710,000.

The Compulsory Dance (CD) drawn for the event was the Rhumba. The dance, which was invented by Walter Gregory, was first performed in 1938 at the Westminster Ice Rink in London.

Marie-France Dubreuil (32) and Patrice Lauzon (31) of Canada took the lead with 38.96 points. The Canadian Champions skated a Rhumba with excellent interpretation, close holds and matching lines.

The team also set themselves apart with Dubreuil sporting a striking bright green dress whereas many of the teams seemed to favor hot pink for the lady.

“Every little victory is important,” said Dubreuil. “Every point counts.”

Her partner, however, felt that no one will remember the victory.

“Our goal is the last day,” stated Lauzon. “It’s great to be on this ice, we love compulsories and this dance is one of our strongest because it is not as demanding as other dances. You can see the quality of the knees and the steps.”

Dubreuil agreed. “We are the World Champions of the Rhumba!” she exclaimed, adding that the real quality of the Rhumba is the roundness of the body and the edges. “The Rhumba has a different feeling to it than the others.”

Although their Rhumba filled the ice with excellent speed, flow, and deep edges, the Bulgarians were ranked fifth in the timing portion of the component score which cost them valuable tenths of a point.

This was to be their last CD as the current World Champions are retiring after this competition.

Staviski felt there was no pressure in particular coming in as the defending world champions. “We enjoy skating here,” he said. “The audience is good [and] they received us warmly.”

“Ice dancing has long ago ceased to be a sport where you will stay in first when you were first one time and if you skate clean,” added Denkova. “The results are changing. We came here to compete for the title not as World champions, but like all the other couples.”

Russia’s Oksana Domnina (22) and Maxim Shabalin (25) are third with 37.29 points after putting out a strong dance in which they displayed excellent speed and flow.

When asked if they felt pressure as the top Russian dance team, Domnina replied: “The less you think about it, the better it is. So we don’t try to think about it at all. Our goal is, and always has been, to skate our very best. Everything else is not in our hands.”

Shabalin feels that the starting numbers don’t necessarily play a major role in the results.

“Sometimes you win if you skate first and sometimes when you skate last,” he offered. “It is only unfortunate when you have to skate really early in the first warm up group and your competitors are skating at the end.”

In fourth by only 0.09 points, are Isabelle Delobel (28) and Olivier Schoenfelder (29) of France. The European Champions put out an expressive dance with good edges, earning 37.20 points.

“Sometimes it is really hard to keep your timing right, because it is a fast dance,” said Delobel of the Rhumba.

“It would not be our choice,” added Schoenfelder. “If we had the choice, we would choose the Golden Waltz for the Compulsory Dance because it is more complex and difficult, with more steps. You can see the differences between the skaters better. But we are happy with how we skated today.”

Less then ten days ago while performing a exhibition number in France, Delobel tripped over a TV camera table and hurt her ankle.

“It still hurts because something like this does not heal in three days,” she explained. “I think if it does not get worse I will be fine. I try not to think about it.”

USA’s Tanith Belbin (22) and Benjamin Agosto (25) are currently fifth with 37.17 points. The US Champions appeared more cautious and slow in their CD compared to the top four teams.

“We felt great out there,” said Belbin. “The first time we did the Rhumba this season was at the Cup of China and we did our worst compulsory dance performance there. So we trained very hard for it and are very pleased.”

The teams which placed sixth through tenth are separated by less than two points.

“This is the last competition of the season and the most important one,” said Khokhlova. “Therefore we tried to give it all. We went into it with an optimistic and cheerful attitude. However, it was better in practice this morning. It was a little easier for us to prepare for this dance as we skated it in previous competitions.”

Novitski agreed, adding: “We were pleased with our score. We even didn’t expect such high marks. We feel we could have skated the dance a little better. Our goal is always to skate better than in the previous competition. We don’t plan on any specific placement.”

“We are very pleased today,” offered Scali. “The Rhumba was very hard for us until last year; it was a nightmare for us. We worked very hard with our coaches and have improved so much. It was a good job today – clean and looked easy. We prefer a dance that is closer to the original dance, that has more dance moves and changes of position.”

“I don’t think we could have skated it any better,” said Sinead. “We were careful not to fall into anyone’s ruts; the grooves were deep.

“It went not too bad,” added John. “This is not our compulsory dance. It doesn’t have that many steps, so it’s a difficult dance to do well. I prefer the modern dances which are more challenging. The level of today’s skater is higher.”

“We hadn’t competed [with] this dance yet [this season],” she offered. “We did it at Junior nationals a few years ago, but we haven’t trained it as a senior team. We’re really pleased with our performance.”

Moir felt it was fun to kick off the World Championships as the first skaters on the ice.

“Considering it is our first [world championships], it was fitting that we started it off and it felt good,” he said. “The skate went really well for us and we are really looking forward to Thursday and Friday. We definitely enjoy the newer compulsory dances, like this Rhumba and the new Finnstep (Finnish Quickstep) that is coming.”

White was happy with their placement.

“The Rhumba is not our favorite,” he explained. “We don’t have much diversity, [but] it’s more about enjoying the experience. We want to gain more experience.”

The team didn’t compete at the recent Four Continents Championships as Petukhov had a leg injury.

“I have recovered completely, and I am fine,” he said, adding that the Rhumba is a very fun compulsory dance. “But it is also very difficult because of the steps.”

Skating in their last competition in front of a home audience was a thrill for Japan’s Nozomi Watanabe (36) and Akiyuki Kido (31) who are in 15th place.

“I am so happy to see the audience gave us such big applause,” said Watanabe, who is the oldest skater competing in the championships at 36. “Our score was not the best, but it is a compulsory dance and we will do better in the Original and Free Dance. This is our last competition and it is being held in our home country, so we want to achieve our best score with our best performance.”