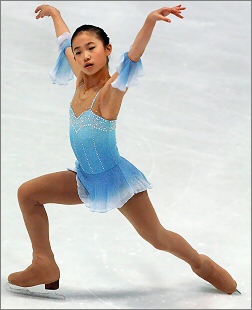 It was a podium sweep for the US ladies, with Caroline Zhang, Mirai Nagasu, and Ashley Wagner placing first through third, respectively.

Leading off the final flight of the event and skating to Meditation from Thais, Zhang put the pressure on the rest of the field with her quiet power and speed as she moved from one element to the next, knocking off all the jumps with ease.

The overnight leader landed six triple jumps, three of which were in combination with double jumps, and a double Axel. Her spiral sequence, which had a 180 degree split position in the change of edge spiral, flowed with the lyrical musical, as did her straight-line footwork sequence.

Zhang ended her performance with a gorgeous layback spin, which had amazing positions and speed, and an excellent level 4 combination spin which received nine +3 GOEs.

“I’m really happy,” said Zhang. “I think it was one of my best performances, even though the Lutz was kind of off.”

Zhang also felt that the experience she had at US Nationals helped her coming into the competition.

“I learned not to get distracted in my program,” said the 13-year-old. “Even If you land [a jump] or if things go hard, you should not let your mind go. You have to concentrate on every element and not think ahead or think back on what you did. Just keep on going.”

Teammate Nagasu demonstrated superb skating skills and technique with silent blades, as they skimmed over the ice to Dvorak’s American Quartet. At her first international event, the 2007 US Junior Champion showed that her lack of international experience was not a cause for concern. Although she was unsteady on the landings of a few of her jumps, she completed six triple jumps, three of which were in combination with double jumps, and a double Axel.

The 13-year-old produced a level three flying camel spin which had an excellent layover, as well as fast and centered changes of edge and donut positions. Her layback and combination spin were both graded a level 4, and her straight line step sequence was light and flowed with the music.

Mirai Nagasu placed second in the long with 106.62 points, and with a total score of 163.84, placed second overall to win the silver in her first international competition.

“I was satisfied with my performance today,” said Nagasu. “I was really nervous in the beginning [with] this being my first international [competition], even though it shouldn’t matter. I was freaking out a little bit, but when I got on the ice I just wanted to do what I’ve done in practice a million times. I’m really glad I was able to do what I did. I am really satisfied with my placement.”

Following on the excellent performance of Zhang, Ashley Wagner skated with determination and athleticism in her interpretation of Gershwin’s Summertime. The 2007 US Junior bronze medalist executed 7 triple jumps, the most of any lady in the competition. Her straight-line step sequence was exuberant and right on beat with the jazzy section of the music. Her level 4 spiral sequence, which started with a change of edge spiral in Biellmann position, reflected a soft and gentle side.

Wagner also showed good speed and variation on her spins, all of which received a level four. The 2006-07 JGP Final silver medalist earned a new personal best of 105.48, placing third in the long and overall with a total of 157.15 points.

“Today was probably one of the best skates I’ve had all year,” offered Wagner. “I was extremely pleased with it. It was great that I had this performance here at Junior Worlds. It was the strongest [performance] and I had the most fun out there that I’ve ever had in a competition.”

“Actually, I take that back,” said the 15-year-old. “That [performance] probably is my best in competition. The reason I had so much fun is because it’s Junior Worlds. It’s one of the biggest competitions I’ve ever skated in. It made all my training in the past year just worth it.”

Wagner felt that in order to continue a “podium domination,” it’s important to push each other.

“We are all very competitive,” said Wagner. “I think that is one reason why the US ladies are dominating the junior circuit right now. We are also very supportive of each other.”

Finland’s Jenni Vähämaa, who stood in sixth after the short, placed fourth in the long with a new personal best of 91.11, moving up to fourth place overall with a total score of 138.61.

The 2007 Finnish Junior Champion interpreted the varying moods of Rhapsody on a Theme of Paganini with good speed and excellent flow, but the 14-year-old singled a loop, stepped out of a triple flip, and put a hand down on a double Axel. Despite the mistakes, her level 3 circular footwork moved right along with the music and her spins and spiral sequence were excellent.

Teammate Laura Lepisto, who stood in 12th after the short program, placed fifth with a new personal best of 86.53, and with a total score of 129.72, finished 7th overall.

The 18-year-old skated with beautiful ease and flow to in her Egyptian-themed routine, landing four triple jumps and a double Axel. Lepisto was also awarded +GOE on her level 4 flying sit spin which had high air and good positions. Her ending level 4 combination spin, for which she was given a resounding round of applause from the audience, received +1 GOE.

Japan’s Rumi Suizu was the last skater to take the ice. Performing to Flamenco and Spanish music, the 16-year-old flipped out of a triple flip which was subsequently downgraded, and later bailed on a double Axel attempt. Despite the mistakes, the 2006 JGP Budapest silver medalist rebounded to land three triple jumps after the ½ way point of the program for which she received bonus marks. Her spins were well-centered with good speed and positions and her circular footwork expressed the Spanish flavor of the music.

“I wasn’t quite sure how I could skate today as the last skater of the competition,” admitted Suizu, “but I trusted myself and I learned that if I trust myself, I can do it. It wasn’t my best skate, but it was a good learning experience for me.”

Teammate Nana Takeda rose from 15th place after the short, to ninth overall after placing seventh in the long.

A third Japanese contender, Satsuki Muramoto, who stood in 21st after the short, placed eighth in the long and rose to 11th overall.

Elena Glebova of Estonia, who stood in fourth after the short, fell on a triple Lutz and triple Salchow. The Olympian also fell out of a double Axel-triple toe loop combination and singled a flip. She placed 11th in long, slipping to sixth overall.